Anna and Bernhard Blume: Reine Vernunft. In their frequently multipart, large format, black-and-white photo series, this artistic couple stages temporal sequences within which they themselves act as protagonists. The first exhibition in the Buchmann Box is the new photographic works by Bettina Pousttchi. The semantic charge of this cinematographic sequences produces a condensed space of association that recalls mnemonic images. 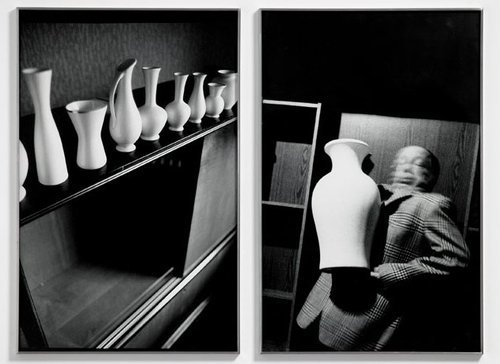 Anna and Bernhard Blume, born in 1937, have significantly extended the genre of the staged photograph, and they number among its most renowned exponents internationally. In their frequently multipart, large format, black-and-white photo series, this artistic couple stages temporal sequences within which they themselves act as protagonists. The scenes are often reduced, estranged, and above all odd: order and chaos seem to mutually condition one another, role-playing and convention inhere in each object, conditioning modes of behaviour and provoking resistance. With their diagnoses of the contemporary condition, the works of Anna and Bernhard Blume always interweave performance, painting, and photography. Deformation and metaphor, subjective perception and collective conventions are thematized, thereby touching on the question of whether the boundaries of the visible also determine those of experience.

We present new photographic works by the Berlin-based German artist Bettina Pousttchi, who is currently working in London for several months at the invitation of the University of the Arts.

The four large-format photographs in this exhibition (180 cm x 225 cm each) are the first works to have been produced in London. Taken on the streets of London, the motifs have an indexical ambiguity that is typical of the artist's approach to photography. The atmospheric blurriness is heightened by the horizontal stripes added by digital editing. The semantic charge of this cinematographic sequences produces a condensed space of association that recalls mnemonic images.

Even the exhibition's title, Tomorrow Was Yesterday, makes it clear that the artist's concern in these works is the relativity of the perception of time, particularly in relation to the photographic and cinematic image. Yet these "time images" also have a poetic dimension where the levels of the real, the symbolic, and the imaginary seem to overlap.

For some time now, the artist has been working with the interim space between the moving and the still image. In her photo series and videos, she blurs the boundaries between cinematic experience and the photographic moment. The points of intersection between media, form, and content interest the artist in terms of the way they formulate the question of the representation and relativity of the visible and thus undermine established orders of the gaze. It raises the questions what "reality" is, how it can be depicted, and how we perceive it.

An extensive survey of the artist's work was recently on view in the Von der Heydt Museum / Kunsthalle Barmen in Wuppertal. In July the Museum on the Seam will exhibit a large selection from the Parachutes series of photographs in the exhibition Heartquake. The artist will also participate in this year's Rohkunstbau exhibition in Potsdam, which will be held from July to October in the Villa Kellermann and whose theme is "Three Colors: Red, Fraternity."

The artist's grant in London will end in June and will then finish with a solo exhibition in London in autumn.

For more information on the artist, please contact the gallery.