The show explores the formal repetitions and shared motifs of photographers working with commonplace genres such as portraiture and commercial still life during the first half of the 20th century. Berenice Abbott, Ellen Auerbach, Ilse Bing, Carlotta Corpron, Hazel Larsen Archer, Dora Maar, Barbara Morgan, ringl+pit, and Margaret Watkins are among the artists included in the exhibition. 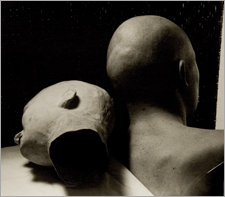 Robert Mann Gallery's summer exhibition, Of the Refrain, explores the formal repetitions and shared motifs of photographers working with commonplace genres such as portraiture and commercial still life during the first half of the 20th century. Berenice Abbott, Ellen Auerbach, Ilse Bing, Carlotta Corpron, Hazel Larsen Archer, Dora Maar, Barbara Morgan, ringl+pit, and Margaret Watkins are among the artists included in the exhibition.

The advertising studio of ringl+pit is emblematic of the exhibition for its creative ingenuity and entrepreneurial acumen. Derived from their childhood nicknames, Grete Stern (ringl) and Ellen Auerbach (pit) chose the studio title to deliberately obscure what their own names revealed: their gender and Jewish background—qualities they assumed would inhibit the success of their business. This same playfulness and subtle subversion extended to their work in the studio, where they undermined the conventions of commercial photography and portraiture. Characteristic of ringl+pit's style, the photographs in Of the Refrain share tight framing and precise compositions. The emphasis on formal innovation within the studio reverberates in the leitmotif of dancing. In the work of Barbara Morgan and Hazel Larsen Archer, bodies in motion are barely contained by the images' frames. While seeming to defy the photographic borders that contain them, the leaping, fragmented bodies accentuate the lines and movement typical of choreographic developments by their subjects, Martha Graham and Merce Cunningham, respectively.

For a photographer to work in the studio is to delimit the horizon of possibilities, one more frame enveloping the frame of the camera. Within this creative space the artist may arrange the elements at hand. In foregrounding the studio as a site of production, Of the Refrain highlights the realities for photographers prior to the emergence of a market for fine art photography, but also as stage for particularly poignant innovation. The artists in this exhibition had to confront the expectations inherent to working with generic formats, but the prescriptive nature of genre also allows for its subversion. Not surprisingly, parallels developed between artists' work across time. They perhaps share a desire to break forth from the territorial boundaries of the studio and camera, and open onto larger forces. As Geoff Dyer has written, it is as though artists "met, repeatedly, in their work." Such meetings might also be called "refrains."

The title of the exhibition refers to a chapter from Gilles Deleuze and Felix Guattari's A Thousand Plateaus, and speaks directly to the notion of repetition. Deleuze and Guattari describe the refrain as an element which marks out a territory amidst chaos. But as well as defining a boundary (potentially an act of closure), a refrain can also open new possibilities. "The refrain ... has a catalytic function not only to increase the speed of the exchanges and reactions in that which surround it, but also to assure indirect interactions between elements devoid of so-called natural affinity, and thereby to form organized masses." Installed to highlight specific formal relationships, the exhibition is a web of connections that are social as well as thematic, a sonorous landscape conjuring the settings of the 20th century historical avant-gardes.