Group show. Manmade systems, like measurements, are fluid, and incomplete. Translating allows for misreading. Conversion factors call precision into question. The foundations of objective authority that stabilize our pillars of rationality loosen, become pliable and perhaps fail when we venture to take an alternate look. 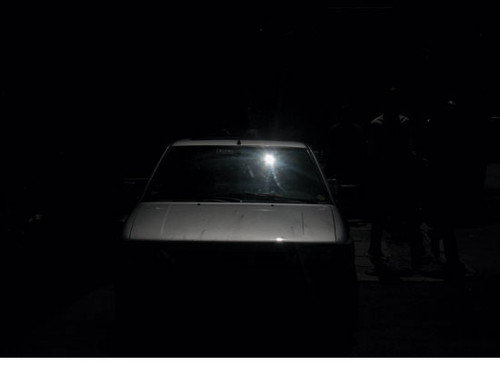 For the thirteen years between 1793 and 1805 of the French First Republic, months and days of the year were given new names. The period between October 22nd and November 20th became Brumaire, the month of fog. The fourth day of Floréal (April 20th – May 19th) was called Aubépine, the day of Hawthorn. In their attempt to systematize a relationship between the days of the year and the seasons, the politicians of the Revolution were unwittingly poetic – imbuing each day with a new lyrical richness. Le Chamois de Messidor, not only marks July 3rd (the opening of the exhibition), but also harkens the acrid sweet aromas of meadows and husbandry (chamois – or little goat), the pastoral images of tillage and harvest (messis).

Manmade systems, like measurements, are fluid, and incomplete. To translate, transpose or convert affords what French Philosopher Paul Ricoeur called linguistic hospitality – or the expression of a new poetics generated by these processes of change. Translating allows for misreading. Conversion factors call precision into question. The foundations of objective authority that stabilize our pillars of rationality loosen, become pliable and perhaps fail when we venture to take an alternate look.

Translations shake the trust we have in our assumptions. Philip Wiegard's Opticart (2006), a reconstructed shopping cart that appears 3-dimensional from afar becomes flat upon approach. Similarly, Hadley + Maxwell display the breakdown in meaning, if not ideology, with their continuing transpositions of Sol Lewitt's Open Cube. From object, to text, to drawing, to digital model back to object, the artists’ weaken modernism's supposed univocal conceit expressed by Lewitt's unbending logic: in the end, Hadley + Maxwell's cube looks bent, diminutive in size and unstable in form. Furthering a sense of ontological uncertainty, Larissa Fassler constructed a model of the Kottbusser Tor area in Berlin completely by eye; what appears to be an architect's model was built entirely from scalar estimations. One footstep, she decided, equals one centimeter on her model.

By unthinkably lengthening his camera's shutter speed upwards of 3 years, Michael Wesely shakes away the pretension that photographs capture any specific moment in time. Never in one place for long, people and cars disappear from the record; buildings erected during the exposure look like gauze; arcs of light in the sky trace the sun's changing path. Ultimately, there is a blurring of the ascribed value systems between the objective and subjective imaginations. Antonia Hirsch's Anthropometrics Vol. 1 (2004) sites the body as a source of 'colloquial' measurements – the performance of which results in idiosyncratic gestures that confuse our notions of standardized precision with traditional practices. Preston Scott Cohen's obsessive geometric projections and transformations embody a precision of form, yet the resulting spaces exude an abandoned, instinctive elegance.

Berlin's gargantuan Tempelhof Airport, once intended to be Hitler's gateway to Germania, is domesticated in Paul Ekaitz' wall installation. Organizing the plan of the airport into a decorative pattern, Ekaitz deflates the building's historical weight and incomprehensible size and transforms it into something quaint, like decorative wallpaper. A shift in meaning is as deft and casual as flipping a light switch. Darri Lorenzen, with a pair of sunglasses held in front of his camera lens, darkened a summer day, its heat, and its glare, into night.


Preston Scott Cohen's work is known for its synthesis of architectural typologies, descriptive geometry, and digital media. The work of his firm, Preston Scott Cohen, Inc., encompasses projects ranging in scale from residences to educational and cultural institutions.
Cohen received first prize in the international competitions for the Taiyuan Art Museum in Taiyuan, China (2007-2011), the Tel Aviv Museum of Art, Amir Building (2003-2009) and the Robbins Elementary School in Trenton, NJ (2006). He is the recipient of numerous awards and honors including the Academy Award in Architecture from the American Academy of Arts and Letters and three Progressive Architecture Awards. Cohen is the author of Contested Symmetries and Other Predicaments in Architecture. His work has been widely published and is in numerous collections. Cohen is Chair of the Department of Architecture at Harvard University Graduate School of Design. [www.pscohen.com]

Hadley+Maxwell have been working together since 1997 when they met in Vancouver, Canada. Since then, their investigations into cultural history, contemporary philosophy, models of subjectivity, music, and aesthetics have taken the form of conceptually driven works in a variety of media including video, installation, photography, painting, and opera. Recent international exhibitions include the Contemporary Art Gallery (Vancouver), Cooley Memorial Gallery (Portland), Museu de Arte Contemporânea (São Paolo), Edith-Ruß-Haus für Medienkunst (Oldenburg, Germany), and the Künstlerhaus Bethanien (Berlin). Current projects include exhibitions at the Taipei Fine Art Museum, and Kunstraum München, and in the coming year they will participate in exhibitions at the Power Plant (Toronto), the National Gallery of Canada, and Montehermoso Cultural Centre (Spain), as well as designing an exhibition for a suitcase that will travel to galleries in Portland, Los Angeles and Paris. Hadley+Maxwell are currently based in Berlin and are represented by Jessica Bradley Art + Projects in Toronto.

Antonia Hirsch is a Vancouver-based artist who has participated in group exhibitions in Canada, Europe and Asia, including Altered States at the Taipei Fine Arts Museum (2006) and Concrete Language at the Contemporary Art Gallery in Vancouver (2006). Her work has been featured in solo exhibitions at Gallery 101, Ottawa (2007), the Charles H. Scott Gallery (2006) and Artspeak Gallery (2003) in Vancouver, the Kitchener Waterloo Art Gallery (2003) and Gallery 44 in Toronto (2001). In 2004, she was awarded the Canada Council Studio at the Cité Internationale des Arts in Paris. Her work can be found in public collections such as the Vancouver Art Gallery, the Canada Council Art Bank and the Sackner Archive of Concrete & Visual Poetry, Miami Beach. Hirsch has written for various publications including, most recently, The Fillip Review, C magazine, and artecontexto. Her current projects include a public art commission for the new campus of the Vancouver Community College, to be inaugurated in the fall of 2008. [www.antoniahirsch.com]

Kindly supported by the Canadian Embassy in Berlin and rapidobject.com

Image: Darri Lorenzen, The Unnamable Point of Being There, 2008