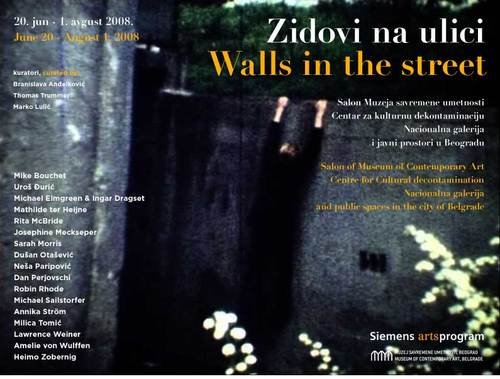 The wall is the fundamental element of human architecture. It serves its purpose as a circumvallation, separation, visual barrier and housing, but simultaneously also as a façade, surface area and theatrical prop. It defines the outer boundary of the private sphere, beyond which unrestricted public space begins. The wall serves as a substrate on which to hang pictures. Walls, and even one individual wall, create spaces. Four walls form the spatial coordinates for the presentation of artworks such as sculptures, objects or installations. Above all in the context of the emerging discourse about the institutional presentation of art in the 20th century, the enormously effective power of the wall as a presentational surface prompted visual artists to explore the "wall” as an object per se. But many of the artworks created for "Zidovi na ulici / Walls in the Street” also concern themselves with the wall in a metaphorical or figurative sense.

Belgrade can be justifiably regarded as a nearly ideal venue for the "Zidovi na ulici / Walls in the Street” exhibition. This city’s name, which is usually translated as "White Fort” or "White City”, allready alludes to the core idea of the project, the wall. The Serbian word "ograda” can mean enclosure, encirclement and fence. For the current exhibition, the Viennese artist Heimo Zobernig responded to this linguistic fact by using the same material as the temporary fencing around the MSUB - Museum of Contemporary Art, which is presently undergoing renovations, so that a part of the enclosure itself would spell out a Serbian word. Viewed from above, the contours of this segment of the fence form the letters of the word "ograda.” What Zobernig encircled in orange construction netting is thus a self-description that confirms its own meaning.

The MSUB - Museum of Contemporary Art, Belgrade (Muzej savremene umnetnosti, Beograd) and its sculpture park, which transitions into a public park with no line of demarcation between the two, is a wonderful starting point for an inquiry into the theme of "the wall.” Not only does this museum rank among ex-Yugoslavia’s most outstanding examples of postwar modernist architecture, its faceted rooms also make it an ideal venue for better understanding the wall as an architectonic (and ideological) element. Built on the outskirts of New Belgrade, which was one of the large urban architectural projects in postwar ex-Yugoslavia, the museum stands beside the junction of the Save and Danube Rivers and opposite Belgrade Fortress, which rises on the other side of the Save River.

Downtown Lawrence Weiner’s artwork responds to the fast-paced evolution of the cityscape in postsocialist Belgrade. This American conceptual artist installed his textual sculpture "PLACED ON EITHER SIDE OF THE LIGHT” atop the roof of the former Beaobank-high-riser. A scaffold of an existing billboard still proclaims a fragment of the advertising slogan formerly used by the now-bankrupt state-run bank: "A CA BAMA” can be translated as "with you.” Weiner used this constellation to bring the ambiguity of the wall into an associative play. This wall not only has two sides - front and back, above and below, right and left. It is also "placed on either side of the light,” i.e. it gleams, seemingly without casting a shadow, on the uppermost edge of a building that towers high above the city of Belgrade.

The Salon of the MSUB - Museum of Contemporary Art stands opposite the famous castle walls that gave Belgrade its name. Built in the 1960s, the Salon now serves as a venue for presentation of one portion of this exhibition’s artworks. Among them is a fascinating film by Neša Paripović which affirms the wall’s "elusiveness” and inherent ambiguity.

In the film, Neša Paripović roves through the city of Belgrade as a solo actor. Dressed in a business suit, he strides assertively, climbs over walls and cordons, treads across streets and lawns, and ignores boundaries and property lines. His path follows an imaginary line which bisects the city so that his trail, which is oblivious to the actual urban development, divides the metropolis into two halves. His footsteps delineate an invisible frontier, a fault line through the city’s districts. The wall positions itself along the borderline, but the borderline is a slender threshold along which many things make themselves recognizable. The meanings created by the boundary - coercion and freedom, domination and servitude, the difference between justice and injustice - tangibly reveal themselves in the form of the physical wall, but also manifest intangibly and metaphorically as a fissure, as the ruins of its own violence.

Some of the artworks also focus very concretely on the structure and essence of the wall: for example, Michael Sailstorfer’s floor sculpture "Studie U Wand,” which will be displayed at the Centre for Cultural Decontamination - Paviljon Veljković (Center za kulturnu dekontaminaciju, - Paviljon Veljković) along with other pieces, including "State Department [Capital],” in which the artist Sarah Morris explores the surface structures of facades. The Paviljon Veljković, another name for the building, is one of the principal exhibition sites: this venue has earned a respected place in Belgrade’s cultural scene thanks to critical artistic contributions about contemporary politics and current events.The exhibition’s third venue is the so-called Nacionalna galerija: despite its name, this location is not a state run art institution, but a commercial gallery. Among the works on display here is a piece by Uros Ðurić, in which the artist responds to the monumentality, historicity and character of monuments.

The "Zidovi na ulici / Walls in the Street” exhibition is the first project that Thomas Trummer is realizing for the Siemens Arts Program. Together with his co-curator Marko Lulić and in collaboration with Branislava Anđelković from the MSUB - Museum of Contemporary Art, Belgrade, he has succeeded in securing the participation of seventeen outstanding artists. By focusing on the city of Belgrade and by bringing the metropolis into contact with the most important contemporary positions in the visual arts, he strengthens and enlivens the active and highly promising artistic scene of the city, which must continually respond to rapidly changing social, political and urban conditions.

You can find further information at http://www.zidovinaulici.org

Opening hours
All venues:
open daily from 12 noon to 8 p.m., closed on Tuesdays