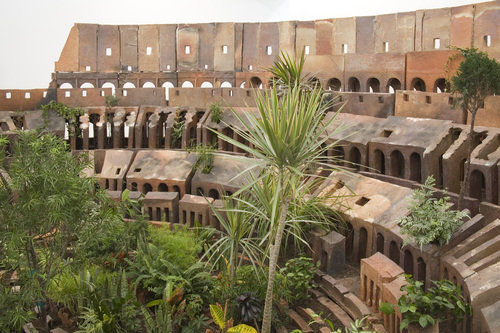 China evokes strong feelings in the Western world right now. We do not understand the country's culture and view of human life, just as they are unappreciative of Western values. The communication between East and West is precisely what is on the Chinese artist Huang Yong Ping's agenda. In his art he points to the great differences between these two parts of the world, but also tries to unite East and West and make us communicate. The exhibition Ping Pong at Kunsthallen Brandts presents works by Huang Yong Ping. It is both a beautiful and very powerful exhibition centering on the world's conflicts and its lack of understanding and dialogue.

The Vegetable and Animal Kingdoms
Five stuffed goats and a wolf are watching a halal slaughter of own their species on TV. A ceramic model of the Colosseum towers like a symbol of the fall of the Roman empire, while vegetation is taking over. An elephant lies dead by itself, a dog is running away with a shoe in its mouth, while a booth stands abandoned. The artist's work tells of the exploitation and violations that are constantly taking place in both the East and the West. A characteristic feature of these works, nine in all, is their enormeous formats. The exhibition includes, for example, a twelve-meter-long minaret, the Colosseum measuring 7.5 meters in diameter, and the even larger installation of Leonardo da Vinci's eight horses, measuring 10 meters in diameter.

Ping Pong between Opposites
In the course of the past ten years, Huang Yong Ping has distinguished himself internationally at the world's largest biennials. He has also attracted attention in Japan, the US and China with his spectacular installations that play ping pong with cultural identities, East and West, religion and science, beauty and horror, power and oppression. But not without humour and irony. The many stuffed animals have their origin in ancient Chinese culture, but Ping uses them to tell stories with a view both to history and the contemporary world.

Art History in the Washing Machine
Huang Yong Ping was born in 1954 in Xiamen, China, and belongs to the first generation of Chinese contemporary artists. Since 1989, he has lived alternately in China and Paris. While he was studying Chinese art, he also studied the art of the West, and one of the artist's major projects ever since has been to combine as well as point to differences between the culture and philosophy of East and West. In an early work, he washed two books on art history in separate washing machines. The result was two identical, grey masses of paper pulp which he compared to the concepts of art in the two parts of the world.

Opening
The exhibition opens on 26 June at 5 p.m. The german artist and curator Andreas Schmid will be giving the opening speech. Ping Pong will be open to the public from 27 June through 21 September, 2008. At the same time, Huang Yong Ping will be showing an exhibition of his work in London, and during the Olympics he will be exhibiting in Beijing.