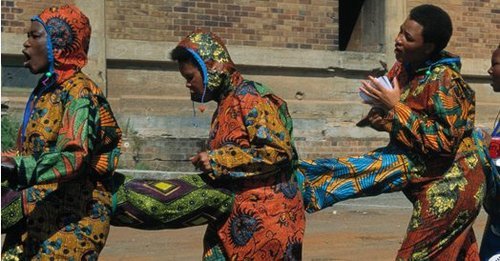 For the tenth Sonsbeek festival, entitled Grandeur, sculptural works will be carried through the city in a procession. The exhibition 'Carried Away – Procession in art' reveals that the phenomenon of art processions is not an isolated one but has a historical tradition. The exhibition will be on display to 21 September at the Arnhem Museum of Modern Art. The exhibition features a selection of Dutch and international artists who have organised processions, or have been influenced by processions, political parades, carnival parades, marches, or funeral processions. Anyone who studies art history will notice an explosion of processions at the start of the 20th century, in the 1960s and 1970s, and from the 1990s to today. Some art processions are in veneration, others are homages, or express protest, criticism or questioning. For instance, the exhibition features a film of a carnival parade in which Joseph Beuys joins the people in solidarity to protest the high price paid for his own work by a museum.

The exhibition also features life-sized pigs by Stephen Wilks, which have been carried around by people and refer to George Orwell's book Animal Farm. In contrast, Wim T. Schippers and Willem de Ridder reveal with their 'March through Amsterdam' that they had no goal in mind other than to organize a simple march. In addition to artists who have organised processions themselves, there are also artists who have been inspired by the procession and have depicted this phenomenon in videos, paintings, drawings, or sculptures. Famous examples include James Ensor's painted carnivelesque parade, which is a criticism of Flemish society, and Roger Raveel's 'Painting Parade'. Finally, Thomas Hirschhorn takes the visitor with him in 'The Procession', an installation inspired by political funeral processions and protest demonstrations in which a fake casket is carried around. Other artists whose work is on display include: Jean Tinguely, Francis Alÿs, Gijs Assmann, Begoña Muñoz, Francis Picabia, Job Koelewijn, Donna Conlon, Meschac Gaba, Roger Raveel, Lucy Orta, Patrick van Caeckenbergh, Fransje Killaars, Yvonne Druge - Wendel, Gunter Brus, Vladimir Tatlin, James Lee Byars and Daniel Buren.