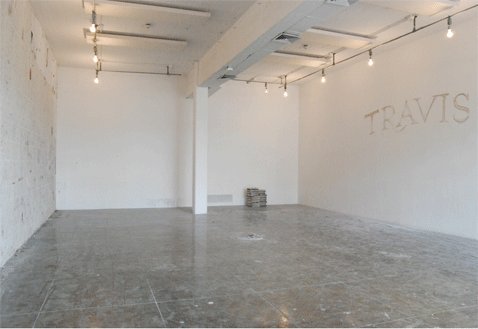 Mark Bradford reclaims discarded and forgotten materials from cities where he works. He creates paintings, collages, and videos that explore the shifting demographics and social history of local communities. Bradford's Artpace installation, TRAVIS, evokes the turbulent history of San Antonio's Travis Savings and Loan Association building, which sits adjacent to Artpace and is visible through Bradford's studio windows. The building's decorative façade appears incomplete and decomposed in a large-scale composition that covers the east wall of the space. The distinctive geometric pattern featured on the building's exterior is imperfectly sketched over thick layers of joint compound and sheets of newspaper. Text emerges from beneath the design, suggesting the controversial history of the Savings and Loan building, famously exposed in the pages of San Antonio's local newspaper.

Marcos Ramirez ERRE's installations explore the role of social history, communication, economics, and militarism in the development of cultural stereotypes and governmental border control. For his Artpace project, The Body of Crime, ERRE presents several works related to a fictitious assassination set along the United States/Mexico border. The centerpiece of the exhibition is a sculptural installation of a recreated crime scene featuring a shattered, bullet-riddled suburban. Forensic materials and bullet shells litter the floor while the sounds of narcocorridos—popular ballads that glorify drug traffickers and smugglers—play from the car stereo. Projected by the crime scene is the short film, The Black Suburban, in which the three characters involved in the crime: the assassin, the policeman, and the victim, are all played by ERRE. Set against a barren backdrop, the violent narrative unfolds without drama or emotion, reflecting the moral ambigu ity and grim reality of the drug war.

ABOUT THE CURATOR
Lauri Firstenberg received her Ph.D. in the History of Art and Architecture at Harvard University. She founded LAXART, Los Angeles, California, in 2005. Currently she is curating the 2008 California Biennial at the Orange County Museum of Art in Newport Beach. At LAXART, Firstenberg has curated Adria Julia: A Means of Passing the Time (2007-08); and Daniel Martinez: How I Fell In Love With My Dirty Bomb (2006); among others. With Anton Vidokle she curated Isaac Julien: True North and Image Bank for Everyday Revolutionary Life at the Gallery at REDCAT in Los Angeles (2006). She has contributed to a host of publications on contemporary art including Art Papers, Frieze, Contemporary, Flash Art, Nka, Art Journal, Parkett, and Lab 71. She is the founder of L'art a new online publication for contemporary art. She is Adjunct Faculty in the Public Art Program at USC Roski School of Art and Sciarc, both in Los Angeles.

EXHIBITION INFORMATION
New Works: 08.2 is made possible by the Linda Pace Foundation; the City of San Antonio's Office of Cultural Affairs; The Andy Warhol Foundation for the Visual Arts; Nimoy Foundation; The Brown Foundation, Inc.; and Melva Bucksbaum and Raymond Learsy, with additional support from the Texas Commission on the Arts and the National Endowment for the Arts, which believes a great nation deserves great art.

ABOUT ARTPACE
Artpace San Antonio serves as a laboratory for the creation and advancement of international contemporary art. Artpace believes that art is a dynamic social force that inspires individuals and defines cultures. Our residencies, exhibitions, and education programs nurture the creative expression of emerging and established artists, while actively engaging youth and adult audiences.
Copyright 2008 Artpace San Antonio

Artpace is located downtown at 445 North Main Avenue, between Savings and Martin streets, San Antonio, Texas.
Free parking is available at 513 North Flores.
Artpace is open to the public Wednesday through Sunday, 12-5 PM, Thursday, 12-8 PM, and by appointment. Admission is free.