The International Symposium on Electronic Art, initiated in 1988, is the world's premier media arts event for the critical discussion and showcase of creative productions applying new technologies in interactive and digital media. It consists of 3 aspects of peer reviewed conference, internationally juried exhibition and various in-conjunction and partner events. 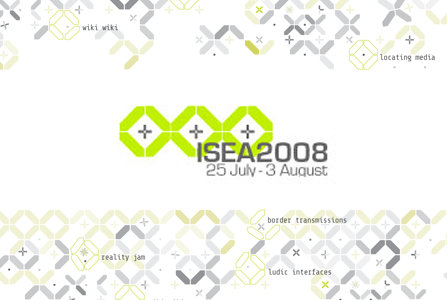 ISEA2008
25 July - 3 August
ISEA, the International Symposium on Electronic Art initiated in 1988, is the world's premier media arts event for the critical discussion and showcase of creative productions applying new technologies in interactive and digital media. Held biannually in various cities throughout the world, this migratory event is being held in Asia for the second time in its history, after Singapore successfully secured this bid.

This symposium consists of three aspects of peer reviewed conference, internationally juried exhibition and various in-conjunction and partner events. ISEA2008 is proud to announce an Artists In Residence programme supported by the National University of Singapore that will run for the year leading up to the 2008 Symposium.

Alongside the conference, a crucial component of the symposium is an exhibition that premieres 16 artworks that have been developed specifically for ISEA2008 by international and local artists during their time as artists in residence in Singapore.

These projects were selected by the ISEA2008 committee after an open call for submissions in 2007. New media artists were required to submit proposals that took their inspiration from the conferences five themes: Locating Media, Reality Jam, Wiki Wiki, Ludic Interfaces, and Border Transmissions (see symposium theme).

The artists whose projects were selected have had the opportunity to work intensely for three months as artists in residence in a number of new media and technology labs based at the National University Of Singapore. They have created the artworks within the lab environment, gaining access to advanced technologies and the expertise of researchers. This confluence between art, research, science and technology has opened up many possibilities for further exploration in both of these fields.

The resulting exhibition is an exciting glimpse into the questions and concerns of new media artists in 2008. Eclectic, restless and always surprising, the artworks in AIR take on a wide range of subjects from the refiguring of surveillance; body language and communication; mapping electromagnetic fields; the flow of water and information on the internet; they address civic spaces and the natural environment, along with the immersive qualities of sounds and smells, and much more.

Cloudland is a glimpse of the diverse terrain of electronic art-making in Aotearoa, New Zealand (located across two islands at the bottom of the Pacific Ocean) where the electronic arts scene is rooted in experimentations with film and sound, and uncertain connections across oceans and ether. Each of the artworks in the exhibition imagines and interpolates place. Error and mutability creep in, relations shift and reform. The spooky infrastructural magic of electricity flows, animating mist and dancing particles, drawing real conversations from artificial mouths and stories from artworks both lumpen and ethereal.

Cloudland is curated by Su Ballard, Stella Brennan and Zita Joyce for ADA, the Aotearoa Digital Arts network, a gathering point for artists in or from Aotearoa working with digital media and technology which was formed in 2003.

Experimenta Play ++ is an exhibition of five recent exemplary Australian media artworks curated by Experimenta around the theme of 'Ludic Interfaces' as part of ISEA2008. All of the works chosen for the exhibition utilise playful methods of interaction in order to involve the gallery visitor in the artwork. Touch, movement, sound, shadow, and pressure are used in innovative ways to trigger responses in the works, to generate narrative within fictional worlds and create sonic compositions.

An exhibition of media art works selected from the Swiss Artists-In-Labs residency programme funded by the Ministry of Culture in Switzerland. Seven media artists re-interpret and question research about Artificial Intelligence, engineering, environmental science, human disease and biotechnology. Lucid Fields is about the hidden and factual fields: a ‘reality jam’ that exists in science today between ‘truths’ rather than between fictions. Through media art interpretation the artists question how empirical knowledge is situated and highlight the discourses surrounding "truth" in relation to technical progress in our information society. These artists use technology as a method to explore the potential for communication and combine art with scientific research in a clear way for the viewer, raising awareness of issues crucial to the future of society such as machine/human extensions, surveillance, control, energy, relativity, human eye disease and genetically modified agriculture. Lucid Fields accentuates the role of place, community and culture in relation to scientific ‘facts’.

Curated by Irene Hediger, a curator who is currently Co-Director of the Swiss artists-in-labs programme at the Institute for Cultural Studies in the Arts, University of the Arts, Zurich.

The two Malaysian artists who are the focus of Relocations, have been creating electronic art since the 1990s, endeavouring to locate emerging new media technologies within national art practice, before moving onto global platforms. The exhibition includes single channel video, web based works and installations; artworks which unpick and reconstruct the relationship between art, culture and technology. In Video Reflux (2007), Niranjan Rajah addresses the decline of the power of video in the face of the sharing, recycling, appropriating and annotating of content over the Internet. While in Siri Hijab Nurbaya (2003), Hasnul Jamal Saidon’s video installation addresses questions of gender and identity within the global mainstream media. Relocations critically places these artists within the context of contemporary new media where the redefining and repositioning of ideas and concepts is an ongoing and constant process.

Curated by Roopesh Sitharan, a Malaysian artist, curator and researcher who has curated and co-curated several national and international exhibitions and workshops. He was involved with the Siggraph 2005 art exhibition and served as programme coordinator for a collaboration with Sun Microsystems as part of the San Jose ZeroOne/ISEA2006 Electronic Arts Symposium held in San Jose, California.

Niranjan Rajah (Malaysia) is an artist, theorist, curator and academic. He is Assistant Professor at the School of Interactive Arts and Technology, Simon Fraser University, Malaysia, and has practiced and exhibited as a painter, installation artist and as a new media artist in Europe, South East Asia and North America.

SPEKTR! is a unique tactical media performance in which the artists conduct an audiovisual 'mapping' of the electromagnetic spectrum to create sound and video landscapes. As solar radio interference recedes, they scan the night sky, picking up chatter from passing planes, amateur radio conversations, satellites, digital data streams and natural radio sources. 88 frequency zones will be mapped in real-time, structured together with a fifteen-year archive of digital and analogue signals that the artists have been collecting from all over the globe.

The SPEKTR! structure is based on the filing of the U.S. Patent 2,292,387, that was granted to avant-garde composer George Antheil and Hedy Kiesler Markey (AKA Hollywood actress Hedy Lamarr) in 1942. This early version of frequency hopping used a piano roll to change between 88 frequencies and was intended to make radio-guided torpedoes harder for enemies to detect. The idea was not used until 1962, when it was deployed by U.S. military ships during the Cuba blockade. Today Lamarr and Antheil's frequency-hopping idea serves as the basis for modern spread-spectrum communication technology used in devices ranging from cordless telephones and military radio to WiFi Internet connections.
Biography

Marko Peljhan (Slovenia) is the founder of Projekt Atol, LJUDMILA (Ljubljana Digital Media Lab) and Makrolab and works at the intersection between art and technology. As well as award-winning art projects and installations, he has developed navigation systems that are used in flight and spaceflight projects and has conducted research at the Yuri Gagarin Cosmonaut Training Centre in Moscow and MIR (Microgravity Interdisciplinary Research consortium).

Co-produced by PROJEKT ATOL and RX-TX. Supported by the Ministry of Culture of the Republic of Slovenia, City of Ljubljana Cultural Department and Canada Council.