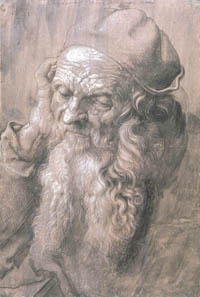 Master Drawings from the Collection of the Albertina, Vienna

This spring, visitors to The Frick Collection will have the opportunity to view works representing five hundred years of the highest achievement in the draftsman's art by such masters as DÃ¼rer, Leonardo, Michelangelo, Raphael, Rubens, Rembrandt, van Gogh, Klimt, Picasso, Chagall, Schiele, and Pollock. The Frick Collection is the only American venue for the special exhibition, Michelangelo to Picasso: Master Drawings from the Collection of the Albertina, Vienna, which opens on April 18 and remains on view through June 18, 2000. The Graphische Sammlung Albertina (Graphic Art Collection Albertina) is one of Europe's greatest repositories of works on paper. This exhibition features forty-five master drawings and watercolors, many of which have never left Austria or are only very rarely on view. The works selected are not only of the highest quality, but are representative of several different eras of collecting at the institution - from the Age of Enlightenment to the present day.

These drawings and watercolors were selected by Dr. Konrad Oberhuber, former Director of the Albertina, Vienna, and Dr. Barbara Dossi, Head of Collections, in collaboration with Dr. Katharine Lochnan, Senior Curator of Prints and Drawings, the Art Gallery of Ontario, Toronto, where the exhibition made its debut this winter. At its first showing, Michelangelo to Picasso was highly acclaimed in the Canadian press and enthusiastically attended. Presentation of the exhibition in New York has been made possible, in part, through the generosity of the Fellows of The Frick Collection.

The History of Collecting at the Albertina

The Graphische Sammlung Albertina, Vienna, developed from the collection assembled over a fifty-year period by Albert, Duke of Saxe-Teschen (1738-1822), the eleventh of the fourteen children of Frederick Augustus II, Prince Elector of Saxony. The Duke's refined interest in prints and drawings and ample financial means allowed him to acquire entire collections at one time, including his most impressive purchase of the collection of drawings and watercolors by DÃ¼rer, amassed by Emperor Rudolph II. Following the Duke's death in 1822, the collection (consisting of 14,000 drawings and 230,000 prints) was bequeathed to his heir and nephew, Archduke Charles of Austria. This collection was combined in 1920 with that of the prints and drawings of the Imperial Court Library to form the Albertina. The institution continued to acquire important works throughout the twentieth century, and today the holdings comprise 65,000 drawings and approximately one million prints from all major regions of artistic production, from late Gothic to contemporary art.

Highlights of the Exhibition

The exhibition offers a window through which to glimpse the artistic process at its most intimate, and to gain an appreciation of the full range of the draftsman's art. While some of the works in the exhibition are loosely-sketched studies, others are highly detailed and can be seen as finished works of art. Among the highlights is DÃ¼rer's, Head of an Old Man of 1521, a meticulously detailed portrait of a ninety-three-year-old subject, which served also as a study for his subsequent painting of St. Jerome. Other drawings which served as studies for work in another medium are Leonardo's Apostle (probably Peter), one of the few surviving studies for the artist's well known The Last Supper fresco in Milan, and Michelangelo's Seated Male Nude (Ignudo) and Studies for Two Arms, a preparatory drawing for one of the male nudes contained in the ceiling frescoes of the Sistine Chapel in the Vatican. This last work is a particularly rare piece, as Michelangelo burned so many of his drawings. From these Renaissance forebears the exhibition continues through the centuries with examples that demonstrate a range of drawing techniques and styles such as Rembrandt's evocative work Farm Houses Under a Stormy Sky, to Pablo Picasso's extraordinary large Cubist Head of a Woman, to Jackson Pollock's improvisational untitled drawing in black ink.

New Publication Available in Conjunction with the Exhibition

In a book accompanying the exhibition, Albertina: The History of the Collections and Its Masterpieces, Dr. Barbara Dossi, Head of Collections at the Albertina, presents new research on the fascinating development of the institution. The softcover book represents a substantial enlargement of knowledge about the Albertina, particularly with regard to the activities of the owners and directors over a period of nearly two-hundred and fifty years. Published by Prestel Verlag, the book includes a bounty of historic images and also highlights eighty works from the collection. An important scholarly contribution, this book is available in the Museum Shop of The Frick Collection for $45.00, or by calling (212) 288-0700.