Annual Report. The biennale will be designed around three components. The first part, On the Road will be a report on recent exhibitions that have occurred or exhibited elsewhere between 2007-2008. The second component of the exhibition structure, Position Papers, is a platform dedicated to the curatorial proposals and experiments in exhibition making by emerging curators. The third element, Insertions, will take the format of a limited series of new projects commissioned specifically for the biennale. Artistic Director: Okwui Enwezor. 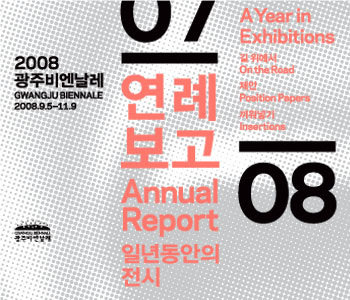 The challenge of establishing a major international biennial exhibition in Gwangju coincided with the rising impact of globalization at the end of the 20th century and the prosperity that has profoundly redefined Asia’s economic and political role at a global level. Propelled by technology, modernization, and the rapidly expanding role of economic and cultural networks in the global system, the so-called Asian economic miracle has profoundly shaped the growth of cultural and artistic perspectives. Economic liberalization and cultural expansion have provided a horizon of new possibilities for reflection within emerging technological, political, social, and knowledge spheres. In South Korea this new horizon first became visible through a committed and paradigmatic political transformation, a shift underscored by the bold, courageous democracy movement, which erupted on the streets of the city of Gwangju in May 1980 and was brutally beaten down by the military government. The democracy movement was not only unprecedented; it became the leading basis for the democratization of South Korean society and the establishment of new forums of civil society.

Widely acknowledged as the spiritual center of the struggle for participatory democracy in South Korea, the city of Gwangju made the first steps toward claiming the political importance of open civil and cultural forums as indicators of a stable democratic sphere by launching the Gwangju Biennale. At the time of its inception in 1995, the exhibition responded directly to the critical impact of the democracy movements of the 1980s. The inaugural exhibition of Gwangju Biennale was presented to over one million visitors. Over the last decade the Gwangju Biennale’s critical experiment in the field of contemporary art has had a lasting impact in Asia, not least of which is the attempt by other projects in South Korea and neighboring countries to replicate some of its curatorial ambitions and to emulate its example.

The importance of the Gwangju Biennale is, at least, twofold: on the one hand, it is one of the key international cultural institutions to emerge from Korea’s unique modern, national, and historical experience, and linked to the dynamism of Asia in the 21st century. The significance of using the biennial as a model for historical reflection is further underscored when one considers Korea’s postcolonial status. At the same time, the Gwangju Biennale has evolved into one of the few pioneering international exhibitions to engage in the task of analyzing the impact of globalization on the field of contemporary art, and to challenge an older system of international exhibitions based on the outmoded system of national pavilions. In so doing, Gwangju Biennale has provided the space in which to explore the changing nature of international artistic networks, and to examine new modes of artistic subjectivity and conditions of contemporary cultural production that extend beyond national borders or focus on regional modes of identification. Another important point to underscore is the situation of the Biennale as an independent institution. Yet as part of the cultural initiatives of the city of Gwangju, it is simultaneously linked with the network of the global exhibition system and situated at the geopolitical nexus of the cultural policies of the state. These links have allowed the institution to constantly rethink its biennial exhibitions around experimental praxis and innovative curatorial ideas.

In providing such a reflexive site for the critical interrogation of the vicissitudes of contemporary art, the Gwangju Biennale has today assumed a dialectical position in debates focused on the task of reorienting the axis of cultural and institutional networks of contemporary art. The Gwangju Biennale deliberately positions itself as a resolutely global, open-ended exhibition model dedicated to serving as a discursive site for critical works of contemporary art and providing innovative curatorial interfaces for artistic and cultural production. Therefore, a remarkable legacy of its accomplishments is borne out by the fact that it has enlarged its critical mandate while remaining fundamentally an institution based in an artistically underdeveloped region of South Korea. The biennial has therefore continuously fashioned itself as a force in the critical disruption of networks of cultural authority centered in the metropolis.

In 2008, the Gwangju Biennale will continue its tradition of rigorous globalism. The biennale will be designed around three components. The first part, On the Road will be a report on recent exhibitions that have occurred or exhibited elsewhere between 2007-2008. The second component of the exhibition structure, Position Papers, is a platform dedicated to the curatorial proposals and experiments in exhibition making by emerging curators. The third element, Insertions, will take the format of a limited series of new projects commissioned specifically for the biennale.

The principal exhibition logic of 7th Gwangju Biennale will have no thematic framework. Instead, it is comprised of a series of selected traveling exhibitions invited to use the biennale as a destination, a stop on the touring itinerary in the global exhibition network. By inviting exhibitions to the biennale, the aim is not simply to make an exhibition about exhibitions or to debate the principles of curatorial culture. Rather, exhibitions are understood here as fundamental expressions of cultural and intellectual practice, and as such have gone beyond being understood as a form of reflection or forum of debate for art. In our view, exhibition practices, whether centered in museums or commercial galleries, are meeting points for multiple, polymorphic, and diverse publics. In addition, exhibitions have acquired their own unique language and codes of transmission and translation of works of contemporary art, adding to the developing polyglot nature of global cultural discourses. Thus, the principal intention of the 7th Gwangju Biennale is to dedicate a sustained reflection not only on the codes, but, on the discursive relationship between the work of art and its context of presentation, and the environment of display. For the 7th Gwangju Biennale, the exhibition form as such becomes one of the biennale’s principal mediums, a way of simultaneously looking backward and forward, as well as taking stock of the complex ecology of contemporary art and culture. This form functions in relation to the variegated expressive and conceptual methodologies of artists inhabiting the exhibition spaces and sites of the biennale. But instead of considering the context of production ? the artist’s studio ? as the starting point of invitations to artists, the exhibition will focus intensely on an intermediary space, the space of encounter between artwork and viewer, between experience and artistic concept. This intermediary space is the site of reception: the exhibition system.

Bringing together a range of activities produced across the span of nearly eighteen months, the exhibition will serve as hosting site, incorporating into its sequence of galleries and sites activities ranging from performances, readings, film screenings, music, dance, theater, to exhibitions initiated within that period of time. From the obscure to the mainstream, from the local to the transnational, these activities can be understood as a chain of traveling cultural worlds and idioms, a network of incommensurable experiments in global culture within the contemporary calendar. Whether originating from a shopping mall, a folk theater, a makeshift display in a neighborhood, alternative gallery systems, non-profit institutions, local cultural centers, or the commercial gallery circuit, art fairs, museums, festivals, and a wide array of exhibition systems and spaces, the biennale’s task is to illuminate the intermediary space that governs the mechanisms for the assembly of the multifarious positions of each given work. Using the notion of the space of encounter, the biennale hopes to explore models of cultural exchange, setting up a soft, porous line between context and practice, form and medium, artist and system, institution and locality.

on the Road
This section of the biennale will be organized as a series of interlocking arguments, as a set of continuously elaborated relationships, juxtapositions, and structural contiguities, each mapping and bringing together previous experiments in cultural practice. The selected exhibitions and presentations will have been produced and presented no earlier than 2007, or will have been exhibited at some juncture during 2007 and 2008. As the exhibition unfolds, as a field of artistic, curatorial, cultural initiatives, as a concatenation of institutional practices, it serves as a means of knitting together social experiences of art and culture, expanding the forum of even the most arcane of artistic grammars or obscure shows. It becomes a platform to catch those exhibitions or productions we may have either missed or wished we had seen. Annual Report is a report on the distributing system of artistic and cultural forms, a reflection on the intermediary gap between artists, producers, practitioners, and audiences. In so doing, by traveling the selected exhibitions to Gwangju Biennale, the principal aim of the project is to examine afresh the cultural, institutional, exhibitionary networks that define the fundamental paths of public dissemination of contemporary art.

position Papers
The second component of the exhibition will focus on new curatorial ideas, exhibition initiatives, and other proposals. As one of the three constellations of the biennale, Position Papers will feature small group exhibitions of no more than five artists each, where each curator is encouraged to present and install work by artists of their choosing. The Position Papers are an open format with no other restriction than the one mentioned above and will correlate to the other platforms of the 7th Gwangju Biennale, namely On the Road and Insertions, as curators will intervene into the fabric of the biennale as well as the city of Gwangju. Each of the projects developed as part of Position Papers is to be seen as a work in progress, a provisional essay towards a larger horizon, and may consist of previously existing work, or may include newly-commissioned artworks.

insertions
The third area of the project will be based on a series of new projects commissioned specifically for the biennale. These new projects, to be realized across different media and disciplines will serve as punctuation marks throughout the itinerary of the exhibition. The projects will function either as insertions within the general body of the exhibitions, or as manifestations of limited duration. Thus the projects will unfold not only according to the exhibitions’ spatial logic, but as a series of activities occurring across the time of the biennale.