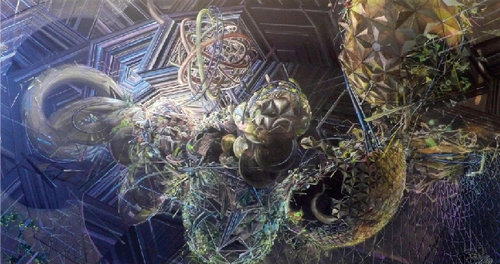 Alison Jacques Gallery is pleased to announce the first solo exhibition of the British painter Tom Ormond. The artist’s complex paintings are informed by an interest in Utopian architecture and schemes and are developed through an accrual of poured paint and dense linear brushwork.

Ormond draws parallels between the notions of problem solving and failure, which are inherent to visionary architectural projects, with the ambition and practice of painting. Frank Lloyd Wright and the experimental work of his former student Paolo Soleri are important sources of inspiration for the artist whose own compositions have the appearance of deftly rendered architectural sketches of futuristic conurbations.

In 2007 the artist travelled around the Southern states of America where he visited Biosphere 2 in Tuscon, Arizona, a three-acre facility built in the 1980s to research and develop self-sustaining space-colonization technology. The geometric architectural elements in Ormond’s latest body of work recall Biosphere 2’s vast glass roof and feature aspects of its various Ecosystems that include an ocean with a coral reef and a tropical rainforest.

Reminiscent of implausible Heath Robinson inventions, Ormond’s paintings frequently depict clustered forms comprising of an incongruous array of elements including gas clouds, scaffolding, electrical components, and commonplace DIY materials. An ambiguous approach to scale, and the selective use of more painterly elements juxtaposed with areas of intricate detail allow these forms to be read as planets one minute and the inner workings of a microprocessor the next.

In New Mexico Ormond visited the Trinity test site where the first atom bomb was exploded. The surprisingly beautiful and anthropomorphic forms created in nuclear explosions, photographs of which Ormond sources on the Internet and in books, often provide the foundation upon which the artist builds labyrinthine ad hoc dwelling places. The titles Ormond chooses for his paintings convey a sense of the optimism of grand schemes but are also suggestive of their future unravelling and dystopian consequences.

Tom Ormond (born in Derbyshire 1974) lives and works in London and gained his MA Fine Art at Goldsmiths College (2003-05). In 2006, Ormond exhibited work In the Darkest Hour, There Will be Light – Damien Hirst, Murderme Collection, Serpentine Gallery and in the same year alongside Banksy in Santa’s Ghetto 15 Oxford Street, London. In 2007 Ormond was awarded the Boise Travel Scholarship. A group of six Tom Ormond limited editions will be published by Other Criteria this September. Six hard-ground etchings on Tiepolo Fabriano paper will be available in editions of 45. A smaller edition complete with artist designed Portfolio box and featuring an extra print will also be produced.

Tuesday 30 September, 6 PM: TOM ORMOND IN CONVERSATION WITH FRANCESCA GAVIN (Francesca Gavin is a freelance writer and editor based in London. She is currently Visual Arts Editor at Dazed & Confused and has written for Time Out, The Big Issue, Another, Another Man, Art Review, Contemporary, Guardian and BBC online, and Blueprint. Her books 'Street Renegades' and the forthcoming 'Hell Bound: New Gothic Art" are published by Laurence King)