In the Desert of Modernity 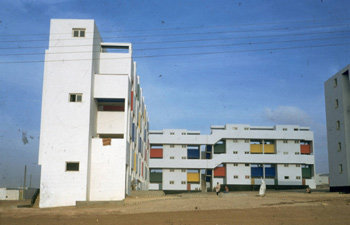 From the 1930s on, colonial North Africa was transformed into a laboratory for European modernization fantasies. Casablanca was seen as a test case for the 'city of tomorrow', radical redevelopment plans included. The developments projected were envisaged as a blueprint for Europe's metropolises, too, and intended to reform the way people lived. In the Desert of Modernity presents works of architecture and urban concepts that arose under the state of emergency that was colonial rule, a state influenced, in turn, by the anti-colonial liberation struggles and trans-national migration in North Africa and Western Europe.

The exhibition introduces and expounds the problems of the ambivalences between colonial rule and modernistic Utopias. In how far are Utopias of modernism and civilization rooted in colonialism? In how far have the breaks within and resistance against colonialism left their mark on modernism? The exhibition also provides tangible evidence of the events, projects, actions, and visions that played a significant role during the time of decolonization between North Africa and Europe, and are still of significance today. It traces the stories of the local inhabitants, architects, colonialists, and scholars involved in the project of modernity and modernization.

Models of architecture, diagrams and urban development plans of Georges Candilis, Michel Écochard, Alison and Peter Smithson and the painting of Le Corbusier and Chaïba outline the visions and concepts of different modernistic Utopias and their inherent contradictions. Rare contemporary footage, and artworks by Kader Attia and Hassan Darsi, reflect historical developments. In turn, photographic works by Monique Hervo, Loïk Prat, Robert Doisneau, and Willy Ronis, as well as posters and flyers, make visible aesthetic approaches to the post-colonial situation and its political struggles. In addition, the Labor k3000, students from the Academy of Fine Arts, Vienna, and the Department of Architecture at the Delft University have put together new interviews, photographs, videos and architectural models for the exhibition.

The example of the building projects dating from the 1950s and 1960s shows that European modernity would have been inconceivable without colonialism. The mass housing projects on the outskirts of large European cities, as well as the postmodern critique of the ability to plan urban spaces and housing, find their counterparts in North Africa.

Alongside the international conference "The Colonial Modern", the exhibition is accompanied by a film program, performances, and additional films in collaboration with Kanak Attack and Remember Resistance, as well as a special issue of the magazine An Architecture and the internet project http://www.this-was-tomorrow.net