Presenting 4 artists the Gallery propose an exploration of individual and social codes through the work of the Chinese artist Nan Hao, Russell Beighton from U.K., the French photographer Guillaume Janot and the Australian Tony Trembath. Absurdity and normality, symbolism and banality, as the title of the exhibition, the artists flirt with limits and conception of our present world. 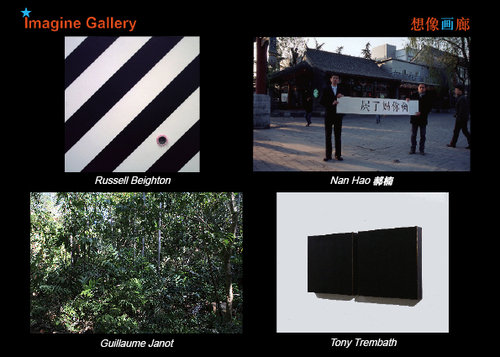 Presenting 4 artists, Imagine Gallery propose an exploration of individual and social codes through the work of the Chinese artist Nan Hao, Russell Beighton from U.K., the French photographer Guillaume Janot and the Australian Tony Trembath.
Absurdity and normality, symbolism and banality, as the title of the exhibition, the artists flirt with limits and conception of our present world.

Nan Hao
In general, by placing his body to the test and pushing the limit between space and human body, Nan Hao tries to question the urgency of being naturalness, of being emptiness and of being human. The basic human experiences that we have lost to the predisposition of contemporary culture and to the dominance of materialism and technology are questioned in his work. Due to the fact that Nan Hao is aware of our behavior is constructed by various functional, cultural and social instrument domination, which edifies us to do things normally and decently in order to fit in the good norm; therefore, Nan Hao is in a big confusion of understanding our psychological and physical abilities in the face of this overwhelmingly utilitarian society.

The research of human body in relation to functionalism would lead him to a concept of transforming normality into abnormality in each specific situation; of adopting nonsensical way of thinking by negating logical way of thinking in exploring different experiences, they are by nature waste and unproductive gestures. Once again, Nan Hao study continues as an 'on-going self exploration', for nothing was confirmed since he always ask himself the things that was proved as true are actually still uncertain. What if things were the opposite of what they seem to be ¨C contemplating on the noise of sophisticated machine as means of acknowledging the benefit of common currency; standing still facing the wall as means of comprehending Chan; or practicing traditional Chinese Eight Diagrams Boxing in front of automobiles as means of experiencing the existence of the Chi (energy flow).
(Born in China in 1981, graduated from the School of Fine Art at Capital Normal University in Beijing in 2004 and from Frank Mohr Institute in Groningen in The Netherlands in 2007. He has also been an Exchange student to MFA studio art program with Hunter College in New York. He has had exhibitions in The Netherlands, Germany, the United States and China. In spring 2008, Imagine Gallery presented his work at the Bridge Art Fair in New York.)

Russell Beighton
The possibilities of paint as a building and constructive medium are ongoing concerns in Russell Beighton's practice. Sculpture and object hood merge with the messiness of paint, exploring the notion of the painting as a living object - whereby a work's process and history is evident in the object itself. The space behind the painting is of equal importance to the artist, engaging the viewer in a three-dimensional sculptural relationship rather than a frontal, pictorial one. By Liz Aston(Feb 2007, Curator, for Axis Arts UK).
(Born in 1974 in U.K., graduated from Chesterfied College in 1994 and Coventry University School of Arts. He has had exhibitions in U.K and China.)

Guillaume Janot
Guillaume Janot works on the state of images clich¨¦. Introducing a slight gap with the style he pretends to adopt, from amateur photography to postcard, through post-offices calendars, Guillaume Janot is investigating the social codes. He has found a singular style assuming the syncretism. He puts together metonymical portraits and pseudo-postcards landscapes to describe a world which would refuse the insidious Prozac effect in a consoling society. It is this skimming the limits style which allows Guillaume Janot to bring up the persistence of barbarities while in a global realism era flouting the individuals.
His last works, in a more documentary esthetic, particularly endeavor to an historical and factual dimension linked to some European places and landscapes. He has also been carrying on a photographic work in China since 3 years.
(Born in France in 1966, graduated from the Nancy School of Fine Arts. He has had exhibitions in many places in France, Germany, England and China. He also teaches photography at the School of Fine Arts in Toulouse, France)

Tony Trembath
In the sculptural work of Tony Trembath, he continues his exploration of interaction across disciplines, such as medicine, religion, electricity, hypnotism, architecture, museum practice and the archive. Generally his project has been the examination or critique of the present through reflection on the past. However his current sculpture takes us back to antiquity as seen in the Chinese art of reproduction (five hundred year old furniture made yesterday) but places the work firmly in the contemporary as it engages with the white cube gallery space and consequently the viewer. In China his long interest in the sculptural activation of space and the use of multiple or rhyming objects as a communicative tool, has found expression in a dialogue with Chinese symmetry and repetition in language, places and objects. Black Lacquer Panel Black Lacquer Panel is a play on language and history and the possibility or probability that 1960s American Minimalism was Ming Dynasty discovery.

(Tony Trembath was born in Australia and has been working as an artist for over 30 years after an earlier career in scientific research. His art practice is cross discipline with a focus on immersive installation, sculpture and artists books. He has exhibited extensively across Australia and Internationally. Major awards include numerous Government grants, eleven public commissions and residencies in Cit¨¦ des Arts Paris, Harbourfront Toronto and Beijing China. In recent years he was lecturer in Sculpture and Contemporary Art Practice at Monash University Melbourne, and curator of the Nillumbik Art Collection. In 2001 he was appointed as Honorary Research Associate of the Faculty of Art and Design at Monash University. His work has been extensively documented in Australian art journals and is held in major public collections.)
Tony Trembath's project in China has been assisted by the Australian Government through the Australia-China Council.

Exhibition Opening On Sunday Sept.7, from 3 to 6pm