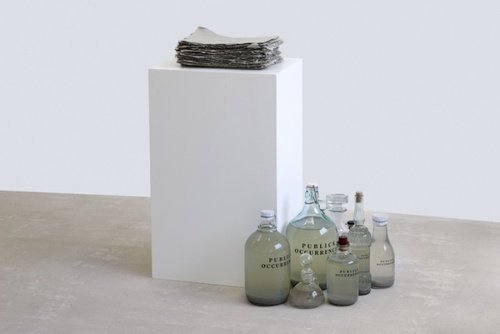 Galerie Michael Janssen is pleased to present the first solo exhibition by Julieta Aranda in Berlin in September 2008.

Publick Occurrences Both Forreign and Domestick (named after the first newspaper published in the Americas in Boston, on Thursday, September 25th, 1690), is an exhibition that looks at the poetics of transformation of temporal historical narratives, and their process of reanimation as physical objects.

A special newspaper, compiled and printed by the artist comprises dated news items ranging from the imprisonment of the Russian Tsar in 1917, the moonwalk of 1971, the bombing of TWA jetliner in 1986, the demise of Laika the space-dog, the 1952 atomic bomb test in Nevada, among many other items.

This newspaper has become the subject for a series of life-size photographs, installations and sculptures depicting private uses of this printed object --as a drop cloth, food wrapping, a sponge to dry wet shoes, a window covering, a mop, and finally as paper pulp for the production of hand-made blank paper.

Like many newspapers of the day, Publick Occurrences originally had an extremely short life span: in fact it was withdrawn from circulation the day after it was printed, due to censorship. Similarly, the artist will not make public the newspaper she produced (although one copy will be preserved to be viewed in the gallery, by appointment only.) Instead, the works that conform the exhibition allow for a partial reading of the textual content, rendering the act of reading a performative task that engages the reader’s will to actively participate.

Such playful reworking of history follows a recent group of works the artist made using as a base material the dust collected from sanding down hundreds of science-fiction novels, with narratives that take place in a time period that spans between 1870 and 2008.

The dust and bits produced by the destruction of these publications, containing fragments of letters and words, swirl endlessly in a vacuum cube, as dust floating in a place of limbo, suspended between a past future that never was.

By analysing the manifold facets of culture, it is clear that the conjunction between art and daily life has not entirely been examined yet. Thomas Grünfeld of Cologne looks at the interface between private and public life as well as art and design. He thus challenges traditional forms and attitudes and examines their timeliness in the present. Thébaïde offers an overview of Grünfeld’s artistic achievements of the past twenty years. His decision to divide the generous exhibition space of the gallery into three areas by using fabric panels, the presentation of four of his œuvres becomes more intimate and private – the White Cube is ruptured and the fabric refers to the 19th century, where the use of material was a common kind of presentation. The visitor receives different impressions and the White Cube exudes a more homely atmosphere. The name of the exhibition refers to J.K. Huysmans book À rebours (Against the Grain) issued in 1884, which tells the story of an eccentric protagonist disgusted by the world, who absconds to his country retreat Thébaïde.

Part of Thomas Grünfeld’s installation are the so-called Wall Tablets (1986 to 1988) which can be best described as a mix between a tableau and furniture. The monochrome surfaces are encased in a frame and the bottom part resembles a tray. The used materials (glass, wood, leather, cloth) convey a certain feeling of living aesthetics. Similar feelings are induced through the simple and structured Cushions (1988-1990). Colour and material refer back to an emotional living situation, which is immediately overcome by the use of alienated proportions and a minimalist presentation.

The irony of the ancient hunting tradition can be found in the Misfits (2001, 2007 and 2008). The objects are splattered around the room – just like trophies. In view of Biotechnology, these chimeras seem to be coming to life. The Felts (2007/22008) complement the exhibition. These motifs are drawn on the emerging history of art and are comparable to the geometrical lines by Imi Knoebel or the sleek surface by Gary Hume. Forms are reduced to a minimum and resemble a collage combined with relief and sculptural elements. The warmth of the felt offers an intimate feeling. Ultimately the Felts are substitutes for the classical tableau and the Misfits surrogates for trophies. The Cushions are synonymous for design aspects in art and the Wall Tablets change between tableau and furniture.

The exhibition Théabïde makes the point that Grünfeld has finally left behind the utopian design, the ideology of do-gooders and social pretence of a past society. He is now incorporating the sociocultural conditions with the emphasis on subjectivism, empathy and playful elements. And we can draw the conclusion that moral standards and the perception of class distinction is of no concern to Thomas Grünfeld any longer.