A solo exhibition of new site-specific works. Working in his primary medium of pastel, Tremlett has created large-scale wall drawings within the gallery space. The temporal nature of these pieces ensures their societal relevance while illustrating a biographic moment in Tremlett's career and personal journey as an artist. 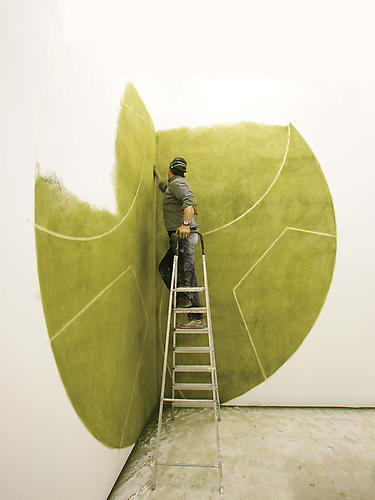 GERING & LóPEZ GALLERY is pleased to present In Space, a solo exhibition of new site-specific works by British artist David Tremlett. Working in his primary medium of pastel, Tremlett has created large-scale wall drawings within the gallery space. He conceived these pieces specifically for the Fifth Avenue space and will construct the works on site. Accordingly, all of the drawings in the exhibition are intrinsically tied to the space, as they come to life and dematerialize within it.

Tremlett began making wall drawings in 1969, rising to prominence in the 1970s with other conceptual British artists such as Richard Long and Gilbert & George, as well as their American counterparts Sol LeWitt and Joseph Kosuth. Tremlett's works are born from a generation fascinated with travel and adventure. Tremlett has journeyed around the world, through Asia, Africa, Central America, North America, and Europe, encountering the diverse people and creations of international cultures. The site-specific works currently on display in New York capture this sense of travel, as viewers physically engage with the drawings only briefly before continuing along their own paths. Tremlett brings his audience closer to authentic human experience through the impermanence of the wall drawings as viewers encounter works indigenous to a specific space. The singular rarity of this viewing can never be remade in quite the same way, leaving visitors with the persistent memory of a momentary artistic encounter.

The delicate pastel powders of Tremlett's drawings interact with the architectonics of the gallery, responding to the preexisting forms of the interior. The temporal nature of these pieces ensures their societal relevance while illustrating a biographic moment in Tremlett's career and personal journey as an artist. As Tremlett travels, his drawings correspond with his sensory experiences. The palette of his early work consisted of slate grey with no presence of color. As Tremlett continued his journey, colors became integral to his pieces. His earth tones from the 1980s reflect the natural pigments Tremlett witnessed during his travels through Africa and Australia. The brighter hues of lemon yellow and sky blue present in his later works illustrate the colors of his repeated Italian visits. Tremlett's current palette functions as a fossil footprint for the many cultures he has observed.

In the wall drawings on view at Gering & López Gallery, all of Tremlett's past influences unite to constitute his most recent work. Muted earth tones return as well as bright hues of red and turquoise, reminiscent of the colors of the Mediterranean seen in Square #1 and Horizontal and Vertical. Tremlett also introduces a monochromatic black piece entitled Kolkata, which combines pastel and powdered graphite to produce the textured effect of grease with a strikingly organic quality. Tremlett employs Roman characters in the composition of several pieces such as Place Drawing and Cochin, often jumbling the letters in such a way that comprehensible words do not readily emerge, adding the element of language to the pictorial plane. The presence of the artist's hand is visibly apparent in all works.

Tremlett was born in St. Austell, Cornwall and grew up on his parents' farm. He attended Falmouth College of Art from 1962 to 1963, before studying sculpture at Birmingham School of Art from 1963 until 1966 and then at the Royal College of Art in London. Tremlett's extensive exhibition history includes solo shows at the Centre Georges Pompidou, Paris; the Stedelijk Museum, Amsterdam; and the Museum of Modern Art, New York, among others. His work is also featured in many prominent collections including the Tate Gallery, London; Cartier Foundation, Paris; Kunsthalle, Hamburg; and the Panza Collection, Varese. Tremlett has numerous catalogues and artist books to his credit. He was short listed for the prestigious Turner Prize in 1992.