A focus on the origins of gothic style 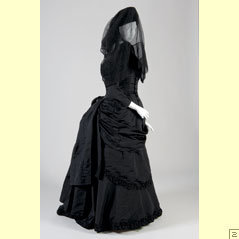 "Gothic" is an epithet that evokes images of death, destruction, and decay. Not simply a word that describes something, such as a Gothic cathedral, it is almost always a term of abuse that implies the dark, barbarous, and gloomy. Such negative connotations have made the gothic an ideal symbol of rebellion for a wide range of cultural outsiders. From its origins in 18th century gothic literature of terror to its contemporary manifestations in vampire literature and cinema, the gothic has embraced the powers of horror and the erotic macabre. Throughout its history, fashion has been central to our vision of the gothic. The Museum at the Fashion Institute of Technology (FIT) will present Gothic: Dark Glamour, the first exhibition devoted to the gothic in fashion, from September 5, 2008 through February 21, 2009.

Set in theatrical mise-en-scene suggesting iconic gothic settings, such as the labyrinth, the ruined castle and the laboratory, more than 75 ensembles will be on display. Although popularly identified with black-clad teenagers and rock musicians, gothic fashion is represented in this exhibition with looks by designers such as Alexander McQueen, John Galliano of Christian Dior, Rick Owens, Gareth Pugh, Anne Demeulemeester, Anna Sui, Olivier Theyskens, Ricardo Tischi of Givenchy, Jun Takahashi of Undercover, and Yohji Yamamoto, as well as sub-cultural styles, such as "old-school goth," cyber-goth, and the Japanese look of Elegant Gothic Lolitas.

"The dark glamour of the gothic has made it perversely attractive to many designers," said Dr. Valerie Steele, director of The Museum at FIT and curator of this exhibition. "John Galliano told me that he saw the ‘Gothic girl’ as ‘edgy and cool, vampy and mysterious,’ while Rick Owens said that whenever he saw goth kids, he felt as though they were his children. But other designers, such as Olivier Theyskens and Ann Demeulemeester, reject the gothic label, although they acknowledge that their work may display a certain dark romanticism."

An introductory gallery will focus on the origins of gothic style, which have inspired both designers and goths. The Victorian cult of mourning, for example, will be illustrated by actual mourning dresses, veils, and momento mori jewelry. The main gallery space will be designed as a labyrinth, featuring iconic themes such as Night, with black evening dresses; the Ruined Castle, with fashion inspired by gothic images of the Dark Ages, ruins, and fragments; and the Laboratory, where futuristic fashion "monsters" are created. Other themes include Veils and Masks, Mirrors, and the Haunted Palace – the last of which draws on Edgar Allan Poe’s architectural metaphor for a disturbed mind.

All photographs by Irving Solero, courtesy of The Museum at FIT, unless otherwise noted.