Light and Space. For this exhibition the artist has created 2 new installations. On the ground floor, Black features a series of floor-to-ceiling parallel scrim material panels, which the viewer must navigate, thereby altering the perceptual field of the space. In addition, Irwin has made subtle adjustments to the optical conditions of the room, as a means of altering the phenomenological experience of the work. 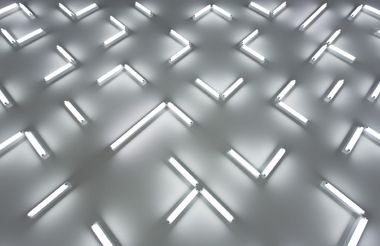 White Cube Mason's Yard is pleased to present Robert Irwin's first solo exhibition in the UK. Irwin has been one of the most influential artists working in the US over the past five decades. A pioneer of the 'Light and Space' movement of the 1960s, Irwin's work focuses on perceptual phenomena, such as light, volume and scale, with installations that are conditioned by the site in which they take place.

Robert Irwin's career began as a painter before he started making objects, such as discs and acrylic columns. The presentation and placement of these works became as critical as the object itself, and in developing these ideas, Irwin sought to dissolve the distinction between the edge of the sculpture and its environment. By 1970, this investigation had led Irwin to abandon traditional object-based studio practice altogether. Instead he began to accept invitations to create new work by responding to specific situations. Irwin has said: 'An exhibition for me is not a statement but an experiment'. With this approach, which has enabled the artist to also incorporate landscape design and architecture in his practice, Irwin has produced some of the most extraordinary site-specific installations of recent decades, including exhibitions at the Museum of Modern Art, the Whitney Museum, Dia Center for the Arts, New York, the Getty Center, Los Angeles and Los Angeles County Museum of Art.

For his exhibition at White Cube Mason's Yard, Irwin has created two new installations. On the ground floor, 'Black³' features a series of floor-to-ceiling parallel scrim material panels, which the viewer must navigate, thereby altering the perceptual field of the space. In addition, Irwin has made subtle adjustments to the optical conditions of the room, as a means of altering the phenomenological experience of the work. Positioned on the west and east walls are two square lacquered black paintings, echoes of which reverberate through the space, transmitted on and through the perpendicular translucent screens.

In 'Light and Space II', located in the basement gallery, Irwin has created an installation with hundreds of fluorescent lights mounted at right angles in a non-repeating, grid-like formation. With no fixed focal point, the enveloping visual field resonates with geometric patterns, drawn by luminous lines, which redefine the characteristics of the space. 'Light and Space II' brings together, in a large-scale but concise installation, the three principle points of reference throughout Irwin's career: light, architecture and space.

Robert Irwin was born in Long Beach, California in 1928; he lives and works in San Diego. He has exhibited widely internationally, including solo exhibitions at the Museum of Contemporary Art San Diego (2007), Chinati Foundation, Marfa, Texas (2006), Dia Center for the Arts, New York (2000), Museum of Contemporary Art, Los Angeles (1993) and Musée d'Art Contemporain de Lyon, France. In 1984 he was the first recipient of the MacArthur ('Genius Award') Fellowship. Among his numerous public projects, the most recent is the architectural design and grounds for the Dia Art Foundation's museum, Dia: Beacon in Beacon, New York and the Central Gardens of the J Paul Getty Center in Los Angeles. He is currently working on a primordial palm garden for the Los Angeles County Museum of Art.