The Living City. Wright (1867 - 1959) is considered one of the founding fathers of modern architecture. His innovative work, which spanned seven decades, influenced several generations of architects. Although Wright never worked in Europe, his oeuvre was published here and was widely appreciated and debated. Wright was responsible for several of the iconic edifices of the modern age - the Robie House, Fallingwater, and the Guggenheim Museum, for example - yet, paradoxically, the full scope of his work and the unique vision it embodies are scarcely known. 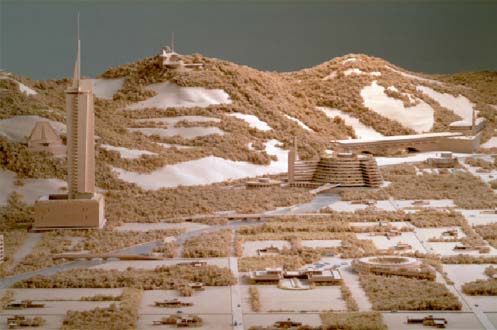 Frank Lloyd Wright (1867 - 1959) is considered one of the founding fathers of modern architecture. His innovative work, which spanned seven decades, influenced several generations of architects. Although Wright never worked in Europe (a project for a building in Venice was not realized), his oeuvre was published here and was widely appreciated and debated. Wright was responsible for several of the iconic edifices of the modern age - the Robie House, Fallingwater, and the Guggenheim Museum, for example - yet, paradoxically, the full scope of his work and the unique vision it embodies are scarcely known. Frank Lloyd Wright belongs to the small group of outstanding people who have changed our views on architecture and our environment in a persistent way. His work endures, his personality and ability of inventing and developing new ideas even in old age fascinate people all over the world. The exhibition Taking as its starting point Wrightâ€™s own writings, the exhibition explores the nine major categories of buildings, defined by social function, that he envisaged in his ideal, decentralized city. First of these are Buildings for Work, Wright rethought the spaces in which modern work is done, devising coherent work stations and integrating the interior and exterior structure. Buildings for Commerce include retail shops, banks, gas stations, garages and roadside markets. Wright invented new forms congruent with particular kinds of commerce. Wright accepted a number of commissions for Buildings for Worship and Commemoration. He thought of these gathering places as sources of spiritual unity for the community. Buildings for Learning were central to his enterprise from its earliest stages. Wrightâ€™schools and universities were open to nature and were places where creativity was nurtured. Buildings for the Arts included theaters, museums and more eclectic structures in which performance and other arts were celebrated. Buildings for Recreation were often planned as elaborate resort complexes to take advantage of the natural environment. In Buildings for the Community were concentrated the civic services necessary for the self-governing of the local population. Wright wanted these centers to be close to peopleâ€™s homes and to serve a limited area. Buildings for Individual Dwelling were of varying size and complexity, but always in harmony with the site upon which they were built both in materials and in configuration. Although he completed commissions for many elaborate and expensive homes, Wright always gave equal importance to more modest housing for working people. Buildings for Communal Dwelling included both apartment towers which Wright preferred to place in open landscape settings and hotels for temporary habitation.

The Living City
In 1935, Frank Lloyd Wright constructed a large model called Broadacre City that he presented as a scheme for the reordering of the urban landscape. The oxymoronic name given to this city of the future emphasizes its key feature: the breakdown of the dichotomy between city and country. Wright was one of the first to perceive that the advent of the automobile had rendered obsolete the dense, insalubrious human concentration characteristic of the nineteenth-century city. He proposed a decentralized plan in which the necessary functions and services of modern life would be distributed over the landscape interspersed with farms and wooded areas. Near the end of his life, Wright returned to this concept. The Living City, illustrated with drawings into which he integrated many of his realized buildings and unbuilt projects, was intended as a blueprint for the future. Using Wrightâ€™s own drawings as a guide, especially for this exhibition an impressive new model of this final, valedictorian vision of a reconstructed world has been commissioned.
The Living City model is the centerpiece of the exhibition. It features buildings designed to serve nine distinct social functions: communal work, commerce, worship, learning, arts, recreation, community services, individual dwelling, and communal dwelling. Within the exhibition each of these nine functional categories is explored chronologically, although it is also possible to view the exhibition synchronically to see how Wright interpreted these nine typologies within a single decade. The exhibition uses backlit transparencies of more than a hundred of Wrightâ€™s most important drawings, photographs, models, and a large selection of decorative arts from particular buildings for an unparalleled presentation of the architectâ€™s achievement.
The importance of the applied arts, with more than 60 examples in the exhibition, reflects Frank Lloyd Wrightâ€™s conception of a building as a complete creation in which the interior furnishings are in harmony with the geometry and the materials of the structure itself which was created for and integrated into a specific geographic setting. Whenever possible, Wright produced designs for the furniture, decorative windows, lamps and lighting fixtures, textiles, tableware and other elements of the decor of his buildings.