Dream and Revolution. The pervading artistic strategy in Max Ernst's oeuvre is to recycle visual material and combine it into new imageries. The collage became his constant method. The display comprises some 175 works; paintings, collages, works on paper and sculptures. The exhibition focuses on his dada years in Cologne, his surrealist period in France and the period of more than a decade of exile in the USA. Finally, his late production from the 1960s and early 1970s, after his return to Europe, will also be featured, when Ernst developed towards the abstract in relation to a cosmic imagery. 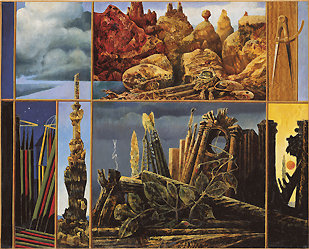 Max Ernst is one of the most influential and important 20th century artists, an artist who changed his approach and style constantly throughout his artistic career and reflected on what art could be after his experiences in the First and Second World Wars. The pervading artistic strategy in Max Ernst’s œuvre is to recycle visual material and combine it into new imageries. The collage became his constant method. The term “dream” in the exhibition title refers to the importance of dreams and the unconscious in his works, while “revolution” stands for the way he challenges conventions and expectations in his art.

It is now 40 years since Moderna Museet featured a major survey of Max Ernst. Today, his work is more relevant than ever. We perceive that a new generation is attracted to his multifaceted œuvre in an era that holds many parallel realities – not least his petrified and imaginary landscapes that have many similarities with computer games and fantasy literature.

Max Ernst’s early works blend cubist-futurist and expressionist elements. From the very beginning he combined different styles and imageries. After the atrocities of the First World War, his work took a new direction. Giorgio de Chirico’s metaphysical paintings were a vital source of inspiration. This is evident in works such as Aquis submersus (Submerged by the Waters) from 1919, a representation of how artistic inspiration dives down into unknown worlds.

Max Ernst subsequently abandoned painting to develop the collage technique. Illustrations, often from teaching aid catalogues, were torn from their context and served as material for collages that evoke the feeling of futility in the wake of the War.

For Max Ernst, collage technique is “the systematic exploitation of the accidentally or artificially provoked encounter of two or more foreign realities on a seemingly incongruous level – and the spark of poetry that leaps across the gap as these two realities are brought together”.

In 1919, the Dada group was also formed in Cologne, by Max Ernst, Johannes Theodor Baargeld and Hans Arp. The word “Dada” had been coined in 1916 in a publication from Cabaret Voltaire in Zurich. Dada was an anti-movement with offshoots in Europe and New York, which challenged norms and utility. The Dada artists wanted to abolish the personal signature, to exploit chance and to integrate mechanics and commodities. The spiritual standpoint of Dada was to regenerate art, life and thinking. They stressed internationalism as a reaction against the nationalist tendencies of the war.

Max Ernst returned to painting in 1921. In Celebes and Oedipus Rex (Oedipus the King) from 1922, he transferred the collage technique to painting. In this way, he could make enlarged versions of the pasted-in pictures and colour them. Painting also obscured the illustrations that had served as his source of inspiration.

In May 1921, on the invitation of André Breton, Max Ernst showed a medley of his indirect techniques from the Dada period from Cologne at the Au Sans Pareil bookshop in Paris: cliché prints, frottages, over-paintings and collages.

In October 1924, André Breton published his “First Surrealist Manifesto”. Dream notation and texts generated by “écriture automatique” (automatic writing) or under hypnosis gave access to the unconscious, which could be used as a source of inspiration for a liberated perception.

The translation of the poets’ automatic writing into visual art triggered a new experimental phase in Max Ernst’s artistic career. He developed new techniques, including frottage. This method involves placing a sheet of paper on a richly textured surface and rubbing over the paper with a pencil. These textures evoked visions that Max Ernst interpreted and developed. In 1926, a graphic portfolio, Histoire naturelle (Natural History), was published with a selection of his frottages.

Max Ernst also experimented with combining frottage and oil painting. He called this grattage. The method involved scraping off layers of paint on canvases placed on various textured surfaces. In this way, he created a series of fishbone forests, mussel flowers [e.g. Fleurs de neige (Snow Flowers) from 1929] and bird monuments.

During his prolific years in France, he created the collage novel La femme 100 têtes (The Hundred-Headed Woman) in 1929 as well as petrified cities and landscapes, with a dense, virgin forest vegetation that engulfs the scenery.

In 1937, Max Ernst’s art was branded as “entartet”, degenerate, in Nazi Germany. The same year, he painted L’ange du foyer (Fireside Angel), as a reaction to the Fascist takeover in Spain. When the Second World War began in 1939, he was interned in southern France several times, but he managed to emigrate to the USA in 1941.

In New York, Max Ernst embarked on experiments with the oscillation technique, which involves splashing paint through a hole in the bottom of a can suspended by strings above a horizontal canvas [see L’anné 1939 (The Year 1939) from 1943], a method that inspired Jackson Pollock’s drip paintings.

Max Ernst also pursued his décalcomanie method, which he had started working on in 1940. A glass sheet or paper is used to flatten the still-wet paint on the canvas. When the glass or paper is removed, it creates a varied surface structure of random blisters, trickles and branches. These inspired the artist’s imagination and were elaborated on with brushes to form dreamlike landscapes, occasionally inhabited by horrifying imaginary characters. One typical example is the painting The Temptation of Saint Anthony from 1945, where tormentors attack Anthony from all sides; they have dug themselves into his groin as though they were his own offspring.

In 1943, he executed Painting for Young People, comprising themes and techniques from his earlier output. In the summer of 1944, he began work on several sculptures out on Long Island, including Jeune homme au coeur battant (Young Man with Beating Heart) and The King Playing with the Queen. Dream and Revolution from 1945-46 is a painting in which Max Ernst, one last time, reflects on his role as a surrealist painter.

In 1950, two retrospective exhibitions of Max Ernst’s art were shown in Paris. But the critics and the public were not receptive to his work, with its varied styles. Moreover, the fashion at the time was informal art and existentialism.

Max Ernst moved back to Europe in 1953 and settled in France. At first, he lived in Paris, then in Huismes, Touraine, and finally in Seillans. His works from this period include Le printemps à Paris (Spring in Paris) and Vater Rhein (Father Rhine). The latter is an imaginary vision of a river god, combining cyclical nature, memories and legends, landscape and portrait. Ernst was awarded the grand prize for painting at the Venice Biennale in 1954. This had two consequences: his final exclusion from the surrealist group, but also international recognition that led to numerous solo exhibitions.

Graphic art gradually formed a large part of his production. The portfolio Maximiliana ou l’exercise illégal de l’astronomie (Maximiliana, or the Illegal Practice of Astronomy), dating from 1964, is a tribute to the forgotten 19th century German astronomer Ernst Wilhelm Leberecht Tempel who calculated the return of comets and discovered a large number of stars and the planet Maximiliana which the title refers to.

Max Ernst also intentionally returned to, extended and modified earlier themes, and added yet another facet to his œuvre. Using exact, straight or curved contours, he reduced his works into simple shapes and characterisations of his figures.

In his works from the late 1950s and onwards, Max Ernst focused on nature and the forces of life. The cosmic imagery approaches that which is most distant, the infinity of space. Max Ernst presents the seemingly simple yet complex galaxies, possible worlds and parallel worlds that lie beyond our wildest imagination.