The Discreet Charm of Technology

Exploring the ambiguous relationship between art and technology, this exhibition suggests the existence of another form and another content inherent in the practice of media art. The display features 119 works produced in Spain and of exceptional aesthetic and historic value. In it, the 13th century is linked to the 21st through a modular approach that focuses on five key themes representative of the artistic condition: the formal code; the visual code; the sensory and space-time code; the body and the identity; and the construction of reality. 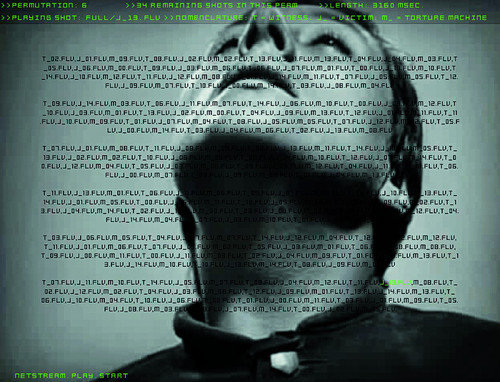 Luis Buñuel made more than a hint at his ambiguous, ironic intent when he entitled one of his most memorable films "The Discreet Charm of the Bourgeoisie". Apart from making an acid social critique, the film also shows us the fragile boundaries that exist between different ways of acting on reality.

Exploring the ambiguous relationship between art and technology, this exhibition suggests the existence of another form and another content inherent in the practice of media art. Technology as an instrument gives way to technique as a procedure that artists use to create visual poetics, sensory and formal explorations, and conceptual developments. The discreet charm of media art lies precisely in this potential to blaze new trails.

The exhibition features 119 works produced in Spain and of exceptional aesthetic and historic value. In it, the 13th century is linked to the 21st through a modular approach that focuses on five key themes representative of the artistic condition: the formal code; the visual code; the sensory and space-time code; the body and the identity; and the construction of reality. The accent on Spanish works is not merely a question of geography; rather, the exhibition tries to establish a dialogue between creative practices and artists that had never before been brought together in the same space at the same time.

It is precisely these conceptual links between the works, and not the materials or the chronological connections, which weave the discursive thread in each module. Moreover, by interweaving the five essential themes together, the exhibition generates new narrative itineraries that can stimulate viewers into creating their own personal interpretations.

ACTING ON THE FORMAL CODE

In the Middle Ages, Ramon Llull, an eminent Catalan philosopher, designed a binary and combinatory system for coding language. Conceptually, this was a precursor of today’s binary computer code. His "disc apparatus" was the first attempt to examine the human-machine relationship from the point of view of knowledge automation. Various 20th-century theories based on new technology, such as Cybernetics, also have a bearing on this relationship.
In the 1960s artists who were influenced by Cybernetics, such as Barbadillo or Alexanco, applied combinatorics (the mathematics of combinations and permutations) to their work and used computers and programming — for the first time in Spain — to create artistic forms automatically, paving the way for generative art. The jump from programming computers to reflecting on the art of the code was made by artists such as Leandre and Marino, who investigated programming from the artistic point of view.

ACTING ON THE VISUAL CODE

Instruments for seeing what is not immediately visible have been widely used by science to overcome the limitations of the human eye. Microscopes and microphotography helped Ramón y Cajal, an eminent Spanish scientist, to examine nerve tissue and to formulate his neuron theory, which revolutionised neuroscience. Up to the present day, this theory continues to influence many fields of knowledge, ranging from artificial intelligence and telematic networks to art.
The invisible side of the visible is being explored in art using the latest technology. The new capabilities open up surprising possibilities for perception and for understanding and interpreting the world. Furthermore artists can use them to undertake the journey from the exterior to the interior world. This concept generates new models of visual exploration and changes the way artists work.

ACTING ON THE SENSORIAL [SPACE-TIME] CODE

The analysis of space, time and the position of the spectator were masterfully investigated by Velázquez who knew how to dismantle the dichotomy between fiction and reality and how to go beyond the limits of the canvas. His influence can still be seen today in the works of Dalí, Pujol and Eguillor. The use of audiovisual, IT and telecommunication techniques increases the ways of representing space-time dimensions linked to the construction of reality.
The great achievement of José Val del Omar was to make sensorial signals visible, the immaterial tangible and to give space-time substance. He envisioned cinema as an all-encompassing experience that would communicate with all the spectator's senses simultaneously and called this "plurisensorial supervision". His ideas opened new paths for audiovisual exploration and they have been re-examined by contemporary artists such as Sistiaga, Balcells, and Garhel.

ACTING ON THE BODY'S INTERFACE

The furthest and most intimate recesses of our minds and bodies — our interface to the world — are beyond our reach. Thus, identity is not completely under our control. It is encoded and decoded through deliberate strategies designed by ourselves and by society. This uneasy situation is frequently examined by contemporary art. Perhaps such questions reflect our growing desire to define our place in the world.
The works in this section of the exhibition are different approaches to the various aspects of this situation. They include the role of our bodies in the life-death relationship, interior-exterior worlds; the influence of external conditions on the construction of identity and the way in which gender codes underpin conventional ideas of femininity and masculinity. Other works explore the concept of the body as a place where everything we have experienced is written; the use of masks and unstable identity; and macrostructural control of individuals.

ACTING ON THE REALITY INTERFACE

The notion of reality depends on what is observed and how it is observed. New media are increasingly replacing the in situ experience of reality with prefabricated images of this "reality" on a screen. We humans no longer live exclusively "in" the world or express ourselves "in" language (an essential skill of existence) but "in" images: in the images we make and in the images that we receive through technical media. Fiction and reality are fused together. This process encourages hedonism and fun-morality, which debilitate any sense of justice and equality.
The artists in this section tackle these questions in their work from the perspective of the individual and also of the family (where individuals forge parallel realities). Others make reference to public space or the mass media, where consensus or confrontations arise about the explanation of reality.