The exhibition is focused on German photographer's extensive and systematic lifetime project: Portraits of artists of his immediate environment. Without being commissioned but purely driven by the desire for a complete series of the art scene of the 60's and 70's in Germany and Europe, Wolleh photographed continuously until his sudden death in 1979. 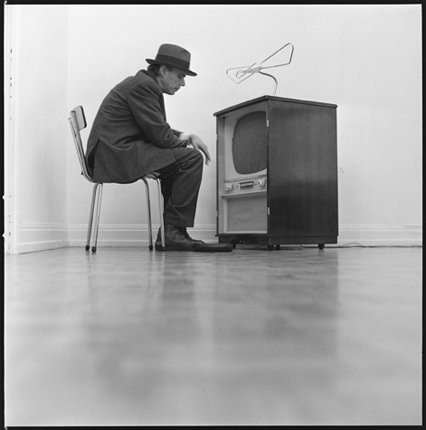 We are thrilled to announce that Galley f5,6 in Munich is the first European Gallery to show one of the most genial and extraordinary 1960's German photographers specialising in portraiture: Lothar Wolleh (born 1930, died 1979)

For the show Gallery f5,6 will focus on Lothar Wolleh's extensive and systematic lifetime project: Portraits of artists of his immediate environment. Without being commissioned but purely driven by the desire for a complete series of the art scene of the 60's and 70's in Germany and Europe, Wolleh photographed continuously until his sudden death in 1979. He photographed artists like René Magritte, Gerhard Richter, Günther Uecker, Otto Piene, Heinz Mack, Georg Baselitz, Joseph Beuys, Gotthard Graubner, Lucio Fontana, Henry Moore, or Man Ray to name but a few.

Wolleh's portraits are the result of a deep intellectual and emotional engagement with the artist and his work. Each portrait was carefully composed before execution, so that even the smallest detail had its meaning. Wolleh always used the square format characteristic of the Hasselblad camera and the black integrated frame on the print. This method was often used in the 60's to denote the ultimate "truth" free of manipulation of an image. Wolleh also categorically rejected the use flash or artificial light. For him the image was supposed to reflect an objective and above all an authentic detail of reality, even if he was directing this.

Wolleh studied applied Art from 1946 in Berlin, Weißensee at the Hochschule für Angewandte Kunst, an art school after the model of the earlier Bauhaus. His arrest by the soviet army for alleged espionage, abruptly ended this career. Lothar Wolleh was imprisoned in a GULAG under catastrophic conditions for over 6 years. He was allowed to return to West Berlin in 1956. From 1959 Wolleh studied at the Folkwang Schule in Essen, under one of Germany's most well known photographers, Otto Steinert. Lothar Wolleh moved to Düsseldorf in 1962, the then centre for artistic production. He quickly advanced to one of Germany's most highly paid commercial photographers next to Charles Wilp, FC Gundlach and Helmut Newton. But concurrently Wolleh was more interested in his autonomous projects. Wolleh ended his commercial career in the late 60's and from then concentrated only on his own projects. He also began to function not only as a photographer but began creating many collaborative projects with artists or acted as an art agent and began collecting art.

It was in these years that Lothar Wolleh developed deep and long lasting friendships with artists like Günther Uecker or Joseph Beuys, which led to collaborative artistic projects. An example of this is: the joint artists' books like Günther Uecker's Nagelbuch from 1970 or Unterwasserbuch in 1971 with Joseph Beuys. In many senses, this idea of collaboration is reflected most clearly in the extensive collection of over-worked portraits by hand of the different artists that Wolleh had photographed. Wolleh printed his portrait of the artist on canvas often in 100 x 100 cm and asked the artist to work with this. Fontana cut through his portrait, Günther Uecker worked a layer of sand into his portrait at the ocean, Man Ray applied as row of film rolls onto the canvas and Gerhard Richter over-painted his portrait completely. Through this collaborative project an interesting symbiosis between photographer and artist occurred at a very early time, still unique today.

Beyond this lifetime project Lothar Wolleh also was interested, similar to August Sander, in documenting people within their careers. He completed an autonomous series on the so-called Men of the German Economy in the 70's from Peter von Siemens to Josef Neckermann, or Rudolf Leiding, father of the VW Golf. Lothar Wolleh also realised book projects on the main Vatican occasions, creating extraordinary colour photographs in the early 60's. On the other hand , he was also interested in the role of the "worker" and continued to work on a series from Germany, Spain and Switzerland.

It is only after 30 years that the art world has recognised Lothar Wolleh's visionary and very important work and role. Gallery f5,6, Munich is proud to be able to show his artist portraits in collaboration with The Estate Lothar Wolleh.