P.S.1 presents The Short Century: Independence and Liberation Movements in Africa, 1945-1994, a landmark exhibition exploring African culture through art, film, photography, graphics, architecture, music, literature, and theater. Featuring works by fifty-three artists from twenty-two countries, the exhibition will occupy the entire three floors of galleries at P.S.1. Curated by Okwui Enwezor for the Museum Villa Stuck, Munich, The Short Century is the first major survey to examine this dynamic and politically-charged era in African art and history... 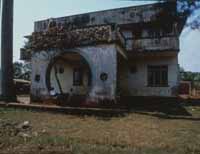 Independence and Liberation Movements in Africa, 1945-1994

Opening February 10, 2002, P.S.1 Contemporary Art Center presents The Short Century: Independence and Liberation Movements in Africa, 1945-1994, a landmark exhibition exploring African culture through art, film, photography, graphics, architecture, music, literature, and theater. Featuring works by fifty-three artists from twenty-two countries, the exhibition will occupy the entire three floors of galleries at P.S.1. Curated by Okwui Enwezor for the Museum Villa Stuck, Munich, The Short Century is the first major survey to examine this dynamic and politically-charged era in African art and history, and how liberation movements and art have been bound together in the forging of new cultural identities. The Short Century presents a cultural context in which the intense politics of African freedom movements are displayed: from the initial struggles for independence following the Second World War, to the collapse of apartheid in South Africa and the establishment of democratic governments in the nations of Africa. An opening reception will be held at P.S.1 on February 10, 12pm-6pm.

"I am very pleased that we are able to present The Short Century at P.S.1.," states Glenn D. Lowry, Director, The Museum of Modern Art, "and I am deeply grateful to the International Council of The Museum of Modern Art for their support of this initiative. The Short Century is an extremely important exhibition that examines in detail the complex relationship between African Liberation movements and the creation of new visual languages to express the powerful intellectual and cultural forces associated with these movements."

On the occasion of The Short Century, P.S.1, The Museum of Modern Art, The Studio Museum in Harlem, and NYU's Intitute of African American Affairs and Africana Studies Program have joined in an effort to engage a broad scope of audiences in the issues addressed by the exhibition. The programming includes film screenings, lectures, performances, dialogues, and panel discussions featuring artists, art historians, curators, and academics that will take place at each of the institutions. The Museum of Modern Art presents The Short Century Film Program, a series of nine films by major African directors organized by Laurence Kardish, Senior Curator, Department of Film and Media, The Museum of Modern Art, in association with Okwui Enwezor and Mark Nash. Jay Levensen, Director, International Council, Astrid Persans, Programs Associate, and Amy Horshak, Museum Educator at The Museum of Modern Art has also organized the African Museum Professionals Workshop, an important initiative that will provide fifteen curators and educators from sub-Saharan Africa an opportunity to experience institutional practices in New York, while establishing relationships with museums and galleries in New York City, Washington D.C., and Los Angeles. P.S.1's Education Program has developed a series of programs specifically for the New York presentation of the exhibition, including artist-led tours and workshops for students and teachers, interactive projects, special performances, and family guides that connect the issues in The Short Century to local concerns. The Studio Museum in Harlem presents two exhibitions and lectures in conjunction with The Short Century, including Yinka Shonibare and Africaine: Candice Breitz, Wangechi Mutu, Tracey Rose and Fatimah Tuggar. P.S.1, The Museum of Modern Art, and The Africana Studies Program at New York University have organized a lecture by the prominent African novelist Chinua Achebe.

The crucial dates of 1945 to 1994 relate to the events that mark the beginning and end of Africa's struggle for independence. In 1945, the 5th Pan-African Congress gathered in Manchester, England, to intensify its demand for immediate self-rule. The Short Century focuses on key historical events taking place after this radical proclamation such as the articulation of the principles of the right to self-determination; the Negritude Movement; Pan-Africanism; Pan-Arabism and the rise of Arab Nationalism; the Algerian, Mozambican, and Angolan wars of independence; and the liberation movement in South Africa. The exhibition concludes with the creation of a post-apartheid constitution in South Africa, marked by Nelson Mandela's election as president in April 1994.

Conceived by Enwezor, The Short Century: Independence and Liberation Movements in Africa, 1945-1994 is a contemporary biography of Africa in the post-war period. Enwezor and his curatorial team of Mark Nash, Co-Curator, Film; Rory Bester, Associate Curator; Lauri Firstenberg, Associate Curator; and Chika Okeke, Associate Curator, investigated a variety of sources to document European domination from 1885-1945, the development of political and cultural consciousness from the mid-1940s through the 1950s, the decade of independence from 1960-1970, and liberation movements in African nations.

The Short Century is divided into seven distinct subject areas: modern and contemporary art, film, photography, graphics, architecture/space, music/recorded sound, and literature and theater, all linked to an historical framework. The exhibition shows the history of African independence-and the resulting postcolonial questions of identity, ethnicity, nationality, diaspora, and citizenship as an ongoing narrative told from the vantage point of Africa.

This section examines how artists responded to political change through the idiom of African modernism. While some African artists adopted European styles to depict African subject matter, others embraced revolutionary ideals. Included in this section are examples of 'nativist' art from Nigeria, Senegal, Tanzania, Zaire and Uganda, suggesting a complex socio-cultural experience that problematizes assumptions about art in twentieth-century Africa.

In this section, film is examined as both a medium for documenting political activity and a creative art form. Footage of political leaders such as Gamal Abdel Nasser, Patrice Lumumba, and Jomo Kenyatta, as well as French newsreels from the years following independence, represent how instrumental film (and video) can be in dramatizing our relationship to the image and to political events. This category also includes films by Africans and foreigners that document liberation struggles, such as Raoul Peck's Lumumba as well as films intended for entertainment.

In addition to the films and videos exhibited at P.S.1, The Museum of Modern Art's Department of Film and Media has organized The Short Century Film Program, which includes works by Ousmane SembÃ¨ne, Djibril Diop Mambety, Abderrahmane Siswill, and others, Friday evenings in the Roy and Niuta Titus Theater. Laurence Kardish, Senior Curator, Department of Film and Media, The Museum of Modern Art states, "The Museum of Modern Art is pleased to be able to participate in The Short Century with the presentation of significant African films that not only use colonialism, its ravages, and reactions as subject, but illustrate the strength and vibrancy of national cinemas emerging from independence." The film exhibitions for The Short Century are organized by Laurence Karsdish, in association with Okwui Enwezor and Mark Nash. Please see the attached schedule for more information about MoMA's film progam.

Photography is used in various forms in the exhibition, ranging from documentary and photojournalism to commissioned studio portraits and art photography. Images from publications including Drum, Paris Match, Nigerian Morning Post, and West African Pilot are represented as well as photographic portraiture of key political figures, and archival shots of demonstrations and other events. Commissioned portraits taken in studios in Bamako, Dakar, Lagos, Accra, and other locations from the late 1940s through the 1950s are also on view.

This section brings together primary source materials including historical maps that illustrate the shifting borders of the continent, commemorative textiles, printed media such as European magazines, oppositional African publications, and political posters.

Colonial expansion led to legislation and regulation that restricted Africans' access to certain spaces and land rights. As national identities emerged, both African and non-African architects drew attention to the uniqueness of the African context by either modifying traditional aesthetics or departing from Western assumptions in planning. Through photographs, architectural models, drawings, and plans, this section also examines the role architecture has played in these countries' ideological and political programs through public work projects, zoning, and plans for new cities.

Negritude, the name of a movement launched by Francophone writers in the late 1930s, advanced the idea that literature could serve as an important ideological instrument for African emancipation. This section takes a look at its proponents, members of an avant-garde circle that became increasingly political and Marxist-oriented, and its detractors. The colonial experience and its aftermath are examined through excerpts from theater productions, such as AimÃ© CÃ©saire's A Season in the Congo in memory of Patrice Lumumba and John Pepper Clark's Song of a Goat.

P.S.1's Department of Education is planning a wide range of events to be held in conjunction with The Short Century. While The Short Century explores the continent-wide effort to recover and reinvent African cultural identity in the postcolonial period, history, colonial power, language, and the creation and development of cultural traditions remain issues that inflect the lives of Africans, African-Americans, Europeans, and Asians who call New York a home. Through discussions on the Internet, interactive projects, and artist-led workshops for teachers and students, the education program will connect the exhibition to concerns and issues that are relevant to local New York communities and will enable communities to further their collective cultural memory of Africa and of colonization as it is experienced in New York. A schedule of films, panel discussions, and other events related to The Short Century is enclosed.

The exhibition is accompanied by an extensive 400-page illustrated catalogue which combines recent critical essays with primary source materials, including seminal speeches, manifestos, and charters; influential song lyrics; reprints of historic journal articles; and outside commentaries such as Jean-Paul Sartre's Black Orpheus. The catalogue also includes a chronology of the continent that incorporates historic events, publication dates of important literary and artistic works, as well as detailed biographical sketches of cultural figures.

Okvui Enwezor, the Nigerian art historian and scholar, is one of the foremost authorities on contemporary African art and culture, and is Artistic Director for Documenta XI in Kassel, Germany. He is the founder of NKA: Journal of Contemporary African Art, and organized Trade Routes: History and Geography, for the Second Johannesburg Biennale in 1997, which exhibited works by 160 artists from 63 countries. In 1996, he co-curated In/Sight: African Photographers, 1940 to the Present at the Guggenheim Museum in New York. His selection of works for The Short Century reveals the significance of African culture in a global context, and captures the anger, frustration, and ultimately the joy of Africa's struggle for freedom. Enwezor's unique viewpoint clarifies the importance of African art and culture as we move into the next century, and reveals the questions that continue to haunt post-colonial Africa.

The Short Century began its international tour at the Museum Villa Stuck, then traveled to the House of World Cultures in the Martin-Gropius-Bau in Berlin. It arrives at P.S.1 following its presentation at the Museum of Contemporary Art, Chicago.

This exhibition is made possible by The International Council of The Museum of Modern Art, the John S. and James L. Knight Foundation, The Friends of Education of The Museum of Modern Art, the National Endowment for the Arts, Jo Carole and Ronald S. Lauder, Agnes Gund and Daniel Shapiro, and The Rockefeller Foundation. Special thanks to the Museum of Contemporary Art, Chicago, New York University, The Studio Museum in Harlem, and the National Museum for African Art, Smithsonian Institution, Washington, D.C.