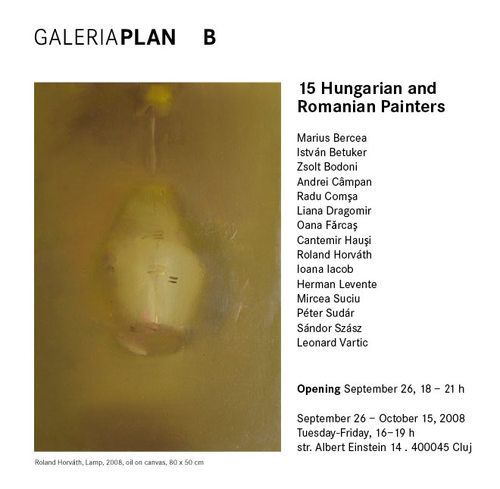 Plan B is delighted to present ‘15 Hungarian and Romanian Painters’, an exhibition focused solely on painting and featuring the work of some of the most interesting Hungarian and Romanian artists currently emerging onto the international art scene: Marius Bercea, István Betuker, Zsolt Bodoni, Andrei Câmpan, Radu Comşa, Liana Dragomir, Oana Fărcaş, Cantemir Hauşi, Roland Horváth, Ioana Iacob, Herman Levente, Mircea Suciu, Péter Sudár, Sándor Szász, Leonard Vartic. From the beginning of their collaboration on this project, Jane Neal and Mihai Pop felt that geographically and historically, an artist-run space in Transylvania would make an interesting context for the first assembling of these diverse and talented painters.

What unites all these artists is their passion for paint. Each artist has made a decision to trust painting as the medium for their work and each delights in its qualities: its visceral nature and its ability to subtly convey a particular mood or atmosphere through controlled and tender (or wildly expressive) brushwork. Besides a passion for paint, the artists in this exhibition share a fascination for figuration and landscape. There is a certain vulnerability present in many of the works in the show such as in Ioana Iacob’s intimate scenes of everyday life which reveal her friends at their daily ablutions. In one work a girl steps into the shower, her unselfconscious pose suggesting she is either oblivious to being observed, or unconcerned about being watched. Liana Dragomir’s subjects are more removed from us; depicted relaxing in hammocks or thumbing through books, their faces are blurred to preserve their anonymity and to allow us to imagine ourselves savouring such moments. Marius Bercea’s strangely compelling swimmers strike a different note. Though his protagonists are ordinary people participating in an ordinary activity, the atmosphere is charged as if this triumphant group has achieved some heroic feat. Oana Fărcaş veers to the left of this sentiment, affording some of her subjects a tender, almost loving treatment that suggests a very human vulnerability – as we find with the two figures in a steam bath; but this tender touch gives way to a merciless uncovering of silent terror in her small but chilling portraits.

Roland Horváth transforms the household fittings and objects he meticulously observes into objects of wonder. Simple and spare of extraneous detail he allows them to shine, illuminating the honesty of functionality and usefulness, as in his softly glowing lamp. Levente Herman’s canvases are awash with the detritus of abandoned ‘tools for modern living’ and the Utopian dream of a glorious modernity has been replaced by a Dystopian culture groaning under the weight of its own excess. The legacy and pain of grand dreams long faded is evoked by the dark monuments of Zsolt Bodoni. Reminiscent of El Greco, the stone figures become freakishly animated by the supernatural lighting; the reassuring form of the Madonna transformed into an angel of death.

Cantemir Hauşi’s works reveal the cost of our dreams of glory. The white hunter, sitting proudly behind the dead bulk of the magnificent rhino, takes centre-stage, and yet it is the black figure, marginalised to his left, who prepared the ground. Yet pretensions of grandeur can be humorous as well as horrible. The props Péter Sudár employs to ape Velasquez’s Mars (c 1599) – a vivid blue helmet and rubber sandals – introduce a levity that also allows for poignancy. This is at odds with his depiction of a lone businessman who looks conspicuously ridiculous in the ploughed field in which he stands. Another surprise is Leonard Vartic’s compelling portrait of a boy. The focal point of the image is not the boy himself, but the badge sewn onto his sleeve – the only part of the painting in sharp focus – a decision that causes us to wonder at what the badge might reveal to us. Mircea Suciu’s works address anger and punishment. A woman stands in the corner; we know nothing of her crime, but we feel her shame, creating our own narratives to accompany the haunting image. Suciu boldly encourages this and pushes this further: his depiction of a groundless condom might lead us down any number of avenues, but ultimately it functions as a reminder that even the grandest passion can be contained.

The symbolism and mysticism of landscape holds a strong fascination for Sándor Szász. The darkly auratic quality of the hills and lakes of Transylvania is strangely potent when condensed and captured on a small scale. Andrei Câmpan’s magical landscapes pay homage to the densely protective, often intensely foreboding nature of the forest and its dark, ancient power. Even inside a walled city the forest prevails, slowly reclaiming the land it once gave up to man. Radu Comşa’s moonlit, forest clearing is anything other than romantic. A lone figure waits for us; his back towards us, he is probably uniformed but perhaps not. The composition itself recalls Magritte at his darkest. The scene has its own beauty but there is no serenity here, only unease. Attention to detail can make for a compelling composition: István Betuker’s model purses his lips as he pinches the folds of his vest. The fold of the cloth makes a line that draws up the eye to the figure’s puckered mouth, instantly evoking the sensuality of the lips in all their soft suppleness while simultaneously evoking a strange and mountainous landscape.

All the artists in this exhibition grew up during communism and have witnessed the changing landscapes – actual, political and social – that its presence and disintegration has wrought. While there are certainly elements in the artists’ works that draw directly from shared childhood experiences of a particular political system, much more of their work is about the shared, global concerns of what it means to exist now in a world fraught with tension, injustice and irregularity - in a landscape dictated by the ghosts of the past and amongst surroundings offering small moments of beauty and reassurance.

Jane Neal is an independent critic and curator. Her special focus over the past years has been the developing art scene in Central and Eastern Europe. She contributes to a wide variety of international art publications.