The first posthumous retrospective for this American sculptor (1922-1981), who created highly personal, exquisitely crafted constructions and assemblages in wood, metal and found objects. 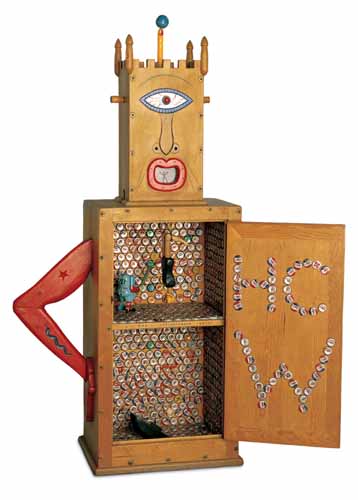 "H.C. Westermann," the first posthumous retrospective for this American sculptor (1922-1981), who created highly personal, exquisitely crafted constructions and assemblages in wood, metal and found objects, will open Thursday, Feb. 14, 2002, at the Smithsonian's Hirshhorn Museum and Sculpture Garden, Independence Avenue at Seventh Street S.W. The show continues through May 12.

On tour from its summer 2001 premiere at the Museum of Contemporary Art (MCA), Chicago, this exhibition of over 130 works includes Westermann's images of houses, ships, towers, boxes, robots, coffins, surreal landscapes , and toy-like figurines with frequent references to war and death, consumer culture and art, literature and film. It travels to Los Angeles and Houston after closing in Washington.

Lynne Warren and Michael Rooks, the MCA's co-curators of the exhibition, will discuss H.C. Westermann's work in a "Curators' Dialogue" on the opening day at 12:30 p.m. in the Hirshhorn's Ring Auditorium. Another speaker, curator Robert Storr of the Museum of Modern Art, New York, will present his lecture, "A Country Gone Nuts: Westermann's America" at 3 p.m. Sunday, March 10. Both programs are free.

Born and raised in Los Angeles, Westermann saw action during World War II in the South Pacific and then Korea before becoming an artist in Chicago. He established his reputation there and moved to Connecticut where he continued to work through the 1960's and '70's. Westermann was an important inspiration for artists such as Bruce Nauman and William T. Wiley and movements like the Chicago Imagists and West Coast Funk Artists, but he remained steadfastly outside the mainstream, peppering his two and three dimensional work with enigma, puns, salty humor, vernacular allusions, and unexpected anthropomorphic imagery.

* Thursday, Mar. 7, 8 p.m. Film. "The Bat Whispers" is a 1930's campy thriller. Westermann was a dead ringer for the star, a B-movie legend, Chester Morris, and considered this film an inspiration.

* Friday, Mar. 15, 1--3 p.m. Art Explorers Workshop for Adults. "It's What's Inside that Counts." Work with an artist to create your self-portrai t as a house. Pre-registration required.*

* Friday, April 12, 8 p.m. Film. "The Death Ship" (1959). Based on B. Traven's tragicomic novel about Western society after World War I, George Tressler's film is about love and peril on the high seas and was a strong influence on Westermann. In German with English subtitles.