Publish and be Damned

The Saatchi Gallery re-open in the 70,000 square feet Duke of York HQ building. The inaugural exhibition brings together the work of 24 of China's leading artists in a cutting edge survey of recent painting, sculpture and installation. The gallery, opened by Charles Saatchi in 1985 in order to show his sizeable collection to the public, has been a major influence on art in Britain since its opening. The space will feature a rotating selection of artists chosen from its web project. 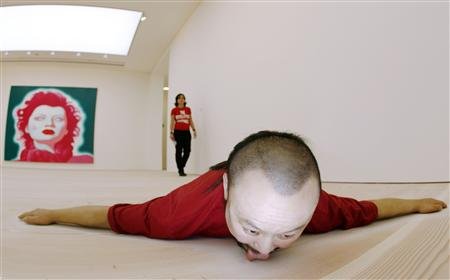 The Saatchi Gallery is now open in the 70,000 sq. ft. Duke of York HQ building on King's Road, Chelsea with an exhibition dedicated to new art from China.

The inaugural exhibition entitled The Revolution Continues: New Chinese Art brings together the work of 24 of China's leading artists in a cutting edge survey of recent painting, sculpture and installation. Free admission to all shows - including temporary, curated exhibitions, as part of the Saatchi Gallery's aim to bring contemporary art to the widest audience possible - has been enabled through the Gallery's corporate partnership with the leading contemporary art auction house Phillips de Pury & Company.

The Saatchi Gallery is a London gallery for contemporary art, opened by Charles Saatchi in 1985 in order to show his sizeable (and changing) collection to the public.
Saatchi's collection, and hence the gallery's shows, have had distinct phases, starting with US artists and minimalism, moving on to the Damien Hirst-led Young British Artists, followed by shows purely of painting and more recently promoting once again art from America in an exhibition entitled USA Today at the Royal Academy in London.

Catalogue
As world attention focuses on the economic development and massive cultural upheavals of China, all of which are embodied in the transformation of Beijing prior to the 2008 Olympics, Chinese artists have emerged after years of containment by the strictures of the national ideology. The Western art world, hungry for new spectacle, has consumed the new art with an appetite, but the art is changing so fast the Western viewer has little means of assessing or understanding the background to these extraordinary developments. The Revolution Continues provides a link between the rebellious spirit of the current generation of Chinese artists and the mood of rebellion that was so explicitly evident during the years of the Cultural Revolution that ran from 1966 to the death of Mao and the fall of the Gang of Four in 1976. In his text Jiang Jiehong argues that the widespread destruction of traditional Chinese treasures by the Red Guards, especially in the early period of 1966, overshadows the entire period. Today’s rebellious artistic spirit is, in fact, an extension of Mao’s legacy.

The extensive Saatchi collection of new Chinese art is presented in conjunction with Joshua Jiang’s examination of the use of the colour red, the iconography of Mao, the sense of the collective and the use of textual language that derives from the calligraphy of the propaganda poster. This dramatic material will be published to coincide with one of the opening exhibitions at the new Saatchi Gallery.

Image: A silica gel sculpture “Communication” by Cang Xn in the new Saatchi Gallery via Reuters

By Train
The nearest mainline railway station is Victoria. It is 10-12 minutes' walk from the gallery.