Suillakku. In this project, Italian artist Roberto Cuoghi undertook an imaginative journey back to Mesopotamia in the seventh century BC, when the Assyrian empire was falling into ruin and the city of Ninevah (the site of which is in modern-day Iraq) was ransacked by its enemies. Inspired by Assyrian lamentations to their gods, this intense aural landscape gives the visitor the impression of being surrounded by hundreds of people at a time of great suffering. 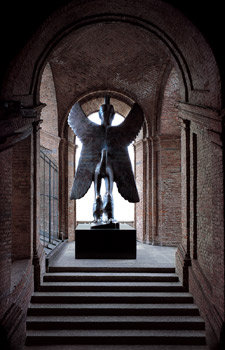 The ICA is proud to present Šuillakku, the first British exhibition by the young Italian artist Roberto Cuoghi. The main element in the exhibition is an eponymous sound installation, to make which the artist undertook an imaginative journey back to Mesopotamia in the seventh century BC, at the time of the ancient Assyrians. This was the point at which the Assyrian empire was under attack from its enemies, and Cuoghi's piece takes the form of an appeal by the citizens of Nineveh to their gods, shortly after the city's fall.

To create Šuillakku the artist spent two years immersed in the language, rituals and superstitions of the Assyrians. The sound track he subsequently composed draws on this intensive historical research as well as his own imagination, and includes a myriad of musical instruments, voices and other sounds. All of the vocal parts were recorded by Cuoghi himself, who also made many of the instruments which can be heard (and some of which are being made available to visitors as part of the ICA's education programme).

During his researches the artist frequently came across the god Pazuzu, a winged being with a dog's face and a scorpion's tail (and which was, incidentally, used as a model for the demon in the film The Exorcist). Pazuzu was one of the most powerful of Assyrian demons, and its image was often placed at entrances and gateways to drive away lesser spirits. The other element in the exhibition is a giant statue of this demon, mounted above the entrance to the ICA – completing Cuoghi's exploration of superstition and fear.

Roberto Cuoghi: Šuillakku has been curated by Marcella Beccaria and organised by Castello di Rivoli Museum of Contemporary Art, Rivoli-Turin.

Publication
The exhibition is accompanied by an in-depth catalogue on the work of Roberto Cuoghi, published by Skira, Milan. This publication includes an essay by the curator, biographical and bibliographical appendices and images of many of the artist's previous works. The catalogue is available from the ICA Bookshop and via the ICA website.

Education programme
The exhibition is accompanied by an education and learning programme especially geared towards schools, colleges and families. Visitors will be able to gain hands-on-experience of some of the unique instruments fabricated by Cuoghi, including hand-made flutes, sistrums, trumpets and drums. Cuoghi has also selected a range of films for families and young people, which will be screened every day for free during the October half term holidays. For details see website.

The Institute of Contemporary Arts is a registered charity in England, No: 263848