Coinciding with Twombly's 80th birthday, the museum present a selection of nearly 100 works, including paintings, sculptures and drawings, will occupy the second floor and one gallery on the first floor, with particular emphasis on the most important thematic series created by the artist over the course of his career. Saving a few exceptions, the works are arranged in chronological order. The curving galleries and great fanlights bring out the strength of his work and the rich tonalities and textures of his paintings and sculptures. 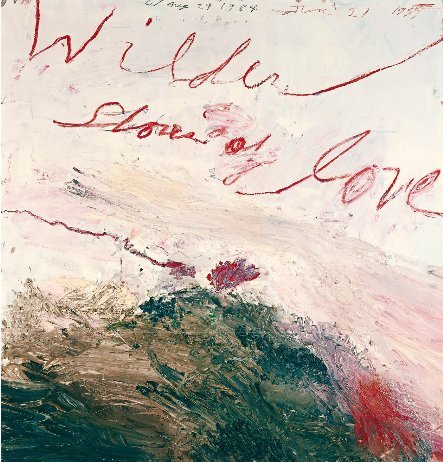 Coinciding with Cy Twombly’s eightieth birthday, the Guggenheim Museum Bilbao will present the most important monographic exhibition that any Spanish institution has ever dedicated to this artist — one of the most influential of the latter half of the 20th century and the dawn of the 21st —from October 28, 2008, to February 15, 2009, organized in collaboration with the Tate Modern in London.

A selection of nearly 100 works, including paintings, sculptures and drawings, will occupy the second floor and one gallery on the first floor, with particular emphasis on the most important thematic series created by the artist over the course of his career. Saving a few exceptions, the works are arranged in chronological order.

This exhibition also emphasizes the museum’s special relationship and commitment to this artist in recent years with the 2007 acquisition of his series Nine Discourses on Commodus (1963), the first unitarily conceived series that Cy Twombly has ever designed and around which the exhibit revolves.

The curator of the exhibition is Carmen Giménez, a great expert on the artist’s work who was also responsible for organizing Cy Twombly in spring 1987, the first major retrospective of this artist in Spain. The show was curated by Harald Szeemann and presented in the Palacio de Velázquez and the Palacio de Cristal in Madrid while she was director of the National Exhibitions Centre. Previously, in 1986, Cy Twombly was among the artist included in the inaugural exhibition of the Centro de Arte Reina Sofía entitled Referencias: un encuentro artístico en el tiempo (References: An Artistic Encounter in Time), also curated by Carmen Giménez. Later on, in autumn 1987, the exhibition of La Colección Sonnabend (The Sonnabend Collection), curated by Jean Louis Froment at the same museum also included a significant representation of the artist’s work.

The presentation of the works that comprise this unique monographic show establishes an interesting dialogue with the unmistakable architecture of Frank Gehry’s building, whose curving galleries and great fanlights bring out the strength of Twombly’s work and the rich tonalities and textures of his paintings and sculptures.

Scope of the exhibition

For the first time in many years – in some cases decades – visitors to these halls will be able to view works like Sunset (1957), Untitled (1962), exhibited in public for the first time ever, and Venus Anadiomene (1962), all from private European and American collections.

The exhibit continues in gallery 207 with six of the fourteen canvases he created in 1969 after the Apollo 11 moon landing that make up the important series Bolsena (1969), together with two of Nini’s Paintings, of which he painted five in 1971.

Gallery 209 showcases the two versions of Treatise on the Veil, the first from 1968 measuring seven and a half metres long, and the second from 1970 measuring nearly ten metres. This hall also holds the Veil of Orpheus (1968), which is being shown for the first time in years, and the sculpture Orpheus (Du Unendliche Spur) [Orpheus (You, Boundless Trace)], 1979.

Another gem on display in this gallery is Cold Stream (1966), one of his first “gray” canvases on which he made inscriptions with white wax pencils on a dark gray background.

Gallery 208 holds the first series conceived as such by Cy Twombly, Ferragosto (1961), consisting of five canvases that are owned by different collections but have been reunited especially for this occasion. This series predates the work recently acquired by the Guggenheim Museum Bilbao, Nine Discourses on Commodus, a set of nine canvases that must always be displayed as a whole and now, for the first time, can be seen alongside the second version of School of Athens and Catallus (1962), a work rarely shown in public.

In this gallery visitors will also be able to contemplate the second series of Quattro Stagioni (Four Seasons) (1993-94), a set of four canvases that are part of the Tate Modern collection in London. The small gallery 204 is primarily dedicated to the artist’s drawings, and will also feature paintings such as Suma (1982) and works on paper like Anabasis (1983), Proem (1983) or HRIH (1982), among others, in an interesting connection between Twombly’s spiral strokes and Richard Serra’s The Matter of Time sculptures.

With regard to Twombly’s sculptural activity, which he abandoned for sixteen years (from 1957 to 1976), particular emphasis has been placed on presenting the pieces made of plaster, and the bronze pieces included in the exhibit are painted by the artist himself. This important selection will occupy galleries 103 and 202 as well as other halls in the museum. Specifically, gallery 202 will feature his sculptures alongside pictorial works such as his two Wilder Shores of Love (1985), Hero and Leandro (1984) or his two 1975 collages, Apollo and the Artist (1975) and Mars and the Artist (1975).

Finally, the organizers have striven to underscore the great vitality of the most recent works created by the artist. Thus, a gallery of great strength features his artistic output from 2005 to 2007, works from his series Bacchus (2005), The Peony Paintings (2006-07) and III Notes from Salalah (2005-07), all of which are closely related to his earlier series Ferragosto and Nine Discourses on Commodus.

The exhibition has received important works on loan from European institutions, including the Tate Modern in London, the Museum Ludwig in Cologne, the Centre Georges Pompidou in Paris and the Darios Collection in Zurich, as well as from the Museum of Modern Art in New York, the Menil Collection of Houston and the National Gallery of Art in Washington, D.C. in the United States. Cy Twombly has also very generously made it possible to exhibit pieces from his own personal collection, as have representatives of many other private institutions and collections both in Spain and abroad.

To accompany the exhibit, the Guggenheim Museum Bilbao has published a catalogue that features an introduction by Carmen Giménez and the essay Zahorí (Dowser) by Prof. Francisco Calvo Serraller, a tenured professor of art history at the Complutense University of Madrid. It also includes two interviews of the artist, one by Nicholas Serota, director of the Tate in London, and the other by the recently deceased art critic David Sylvester, an art historian who produced some of the best writings on Cy Twombly’s work.