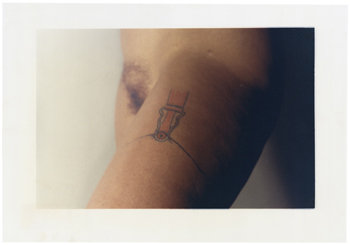 On the 40th anniversary of 1968 the Austrian Cultural Forum New York presents Cutting Realities, an exhibition that links the cultural revolution of the 1960s with contemporary approaches to issues of gender. The works of the fifteen participating artists are drawn from Kontakt, the art collection of Erste Bank Group, Vienna, which focuses on art from Central and Eastern Europe.

Cutting Realities demonstrates how artists articulate their concerns on a visual and performative level by cutting into dominant, conservative, and restrictive reality but also by cutting out their own artistic realities that reflect on given societal processes.

The artworks in the exhibition reflect not only the beginnings of feminism and gender activism but also the current status of gendered lifestyles. The show provides an insightful look at how attitudes toward physicality and sexuality have developed. According to the Slovenian artist and theorist Marina Gržinić, there have been three stages of gender development since its beginnings in the 1960s. The late 1960s and the 1970s primarily saw a dramatization of femininity within a growing feminist environment that was shifted to a queer context in the 1980s. Lastly, in the 1990s, the roles of masculinity and femininity within both a hetero- and homosexual matrix became increasingly subject to questioning. Around the mythical year of 1968, with its radical student protests and sexually revolutionary ideas, the visual world had begun to include a growing variety of images involving bodily constellations and cross-gender relations, providing insight into private realms and bodily m atters that society had kept hidden up to then.

Regarding the public positioning of the body in the 1960s, the situation in the conservative, post-war climate in Central Europe has not been very different from that of the neighboring Communist countries, triggering similar reactions especially towards the negation of woman's role in society. Hence, the formation of subculture movements has been an important tool in communicating artistic concerns. In the case of Eastern Europe, these concerns were not revaluated until the 1990s.

The works in the Kontakt collection analyze the political and historical transformation in Central, Eastern, and Southeastern Europe, where art – against the backdrop of cultural, political, and socioeconomic developments – has played and continues to play an important role in forming counter movements to the dominant social (until 1989 communist) agenda.

The Kontakt collection aims to present works that are integral to the formation of a pan-European art history, focusing on concept and performance art, the formalist approach to modernist structures, the redefinition of material in space, issues of the political and the public as well as matters of the body and its medial representation. One of the collection's goals consists in bringing works from the region into contact with each other as a way of formulating a broader and hitherto nonexistent shared historical context, allowing the works to appear and be interpreted in line with international developments taking place in the arts in Europe and the US. The collection intends to serve as an instrument for communication and identity formation in the region and to recontextualize the individual works of several generations.

A catalogue is available at the Austrian Cultural Forum.