From the Collection of Giuseppe Panza

Recent Acquisitions. An exhibition featuring 39 important artworks from the late 1960s and early 1970s that were recently acquired from Count Giuseppe Panza di Biumo, one of the world's foremost collectors of American and European contemporary art. Composed of works by an international roster of 16 artists, this acquisition substantially strengthens the Hirshhorn's holdings of art from this period. Presented concurrently in several galleries adjacent to the exhibition is the second installment of the museum's ongoing series "Ways of Seeing". 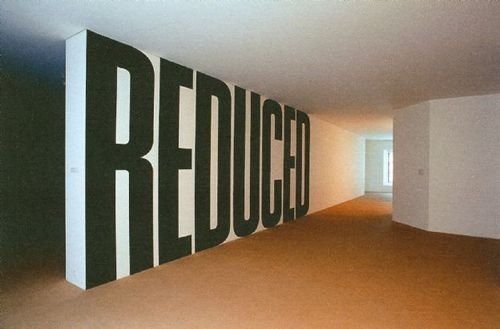 The Hirshhorn Museum presents an exhibition featuring 39 important artworks from the late 1960s and early 1970s that were recently acquired from Count Giuseppe Panza di Biumo, one of the world's foremost collectors of American and European contemporary art. Composed of works by an international roster of 16 artists, this acquisition substantially strengthens the Hirshhorn's holdings of art from this period. "The Panza Collection" is organized by associate curator Evelyn Hankins, who has worked closely with Dr. Panza on the design and installation of the exhibition, which is on view Oct. 23 through Jan. 11. Presented concurrently in several galleries adjacent to the exhibition is the second installment of the museum's ongoing series "Ways of Seeing," which was curated by Dr. Panza and his wife, Giovanna.

"The Panza Collection" features paintings, sculptures, installation art, wall drawings and a film that, as a group, demonstrate the critical premises driving international Conceptual, Light and Space, Minimal, and Environmental art. At the time these works were created, many artists had begun to reject traditional media and aesthetic concerns. Instead, they redefined art in a much broader manner, from conceptual works that favored ideas over the creation of unique objects to large-scale environments that challenged prevalent notions about the boundaries between an artwork and the surrounding architecture.

With this acquisition, the Hirshhorn joins a select group of museums to which Dr. Panza has sold or donated portions of his collection, including The Museum of Contemporary Art in Los Angeles and the Solomon R. Guggenheim Museum in New York. The collector prefers to work closely with an institution, helping it to select substantial bodies of work from his collection that create coherent groupings rather than selling individual pieces. "This is a remarkable opportunity for the Hirshhorn," said acting director and chief curator Kerry Brougher, who has a long-standing relationship with Panza and collaborated with him to select the works. "With these acquisitions we have established a notable core group of international Conceptual and Light and Space pieces that we can continue to develop further with future additions to the collection."

Dr. Panza's approach to collecting is similar to that of the museum's founding donor, Joseph Hirshhorn, in that they both collected the work of select artists in depth. Dr. Panza, moreover, often focused his collecting on a body of work from the most important period an artist's career. The design of "The Panza Collection" exhibition reflects Panza's preference for installing galleries that feature the works of a single artist in order to highlight that individual's accomplishments.

The 16 artists represented in "The Panza Collection" are Robert Barry, Larry Bell, Hanne Darboven, Jan Dibbets, Hamish Fulton, Douglas Huebler, Robert Irwin, On Kawara, Joseph Kosuth, Sol LeWitt, Richard Long, Bruce Nauman, Richard Nonas, Roman Opalka, Lawrence Weiner and Doug Wheeler. The acquisition's highlights include two major installations by Darboven, each comprising more than 130 framed drawings, and a large-scale light installation by Wheeler. The first Kawara works to enter the museum's collection include three "date" paintings created in a single week in October 1971. Three pieces by Irwin dating between 1963 and 1970—a painted aluminum disc, an acrylic column and a dot painting—provide, along with an acrylic disc already in the Hirshhorn's collection, an overview of a critical point in Irwin's early career. Similarly, five early works by Kosuth, including the white neon "Self-Defined" and the five-part "Box, Cube, Empty, Clear, Glass—A Description" complemen t the two works by the artist already owned by the museum, while Sol LeWitt's "Wall Drawing No. 3" brings the number of LeWitt works in the Hirshhorn's collection to eight.

As an adjunct to the exhibition, Giuseppe and Giovanna Panza were invited to visit the storage vaults of the Hirshhorn to choose works from the museum's collection for the second installation of "Ways of Seeing." The series invites noted artists, collectors, filmmakers and others to explore the museum's holdings of nearly 12,000 artworks and create installations that reflect their own unique perspectives, encouraging new ways of looking at the collection and the relationships among works of art from different eras, countries and mediums.

A Meet the Artist talk with Weiner on Dec. 11 and interactive Friday Gallery Talks offer a range of educational experiences designed to engage people of all interest levels in contemporary art. On Nov. 7, After Hours offers extended hours to see the exhibition (8 p.m. to midnight) in a casual setting that includes live performances. The museum's ever expanding library of podcasts (featured on iTunes in the top 100 Arts and Entertainment podcasts) make walkthroughs of galleries and interviews with artists accessible internationally.

A fully illustrated catalogue with contributions by associate curator Evelyn Hankins and Giuseppe Panza will be published by the Hirshhorn Museum and distributed in North America by D.A.P.

The Smithsonian Institution's Hirshhorn Museum and Sculpture Garden invites visitors at all levels of understanding to experience the transformative power of contemporary art. The museum collects, preserves and presents international modern and contemporary art in all media, distinguished by in-depth holdings of major 20th- and 21st-century artists. By collaborating with artists on exhibitions, programs and special projects, the Hirshhorn provides an important national platform in Washington, D.C., for the vision and voices of artists. The museum is open daily from 10 a.m. to 5:30 p.m. (closed Dec. 25) and is located at Independence Avenue and Seventh Street S.W.; admission is free.