The exhibition feature photographs from the series Sparrow Lane, including the debut of new works in the series. Displaying a rich understanding of color and composition, Andres's tableaux depict young women on the threshold of adulthood, propelled by their curiosity and sense of discovery. 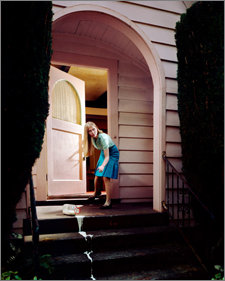 Holly Andres's first solo exhibition in New York will feature photographs from the series Sparrow Lane, including the debut of new works in the series. Displaying a rich understanding of color and composition, Andres's tableaux depict young women on the threshold of adulthood, propelled by their curiosity and sense of discovery. Sparrow Lane is a strange yet familiar world filled with floral wallpapers, satin dresses, vanity mirrors, and family photos in gilded frames — the trappings of adolescence in a bygone age.

Drawing equally upon Hitchcockian cinematic tropes and Nancy Drew dust jackets, Andres's stunning photographs plumb psychological depths that are as quixotic as they are visually seductive. Her protagonists seem caught in states of hyper-self-consciousness: suspicious of watching eyes out of frame, their stiff gestures betray their vulnerability. On the brink of discovery — at that awkward age when one is no longer a child, but not yet fully an adult — these heroines appear as much posed as poised. Their snooping is comprised of small transgressions borne of a strong dose of curiosity, incidents along the way to some personal revelation.

Here at Sparrow Lane mirrors, birdcages, spilt milk, secret passage ways, skeleton keys and hidden objects abound. Andres's use of familiar iconography hints at possible meanings in these not-quite-hard-boiled dramas. Like in gothic fiction, the landscapes and architecture are coded spaces, full of mystery and surprises. But Andres's playful staging and luscious colors temper any ominous undertones. The accumulated series suggests elliptical narratives, but any resolution is elusive; the pleasure of viewing instead draws upon the photograph's allusive and metaphorical qualities — all revealed in Technicolor.

Sparrow Lane is Holly Andres's first exhibition with Robert Mann Gallery. She recently had a solo exhibition at Quality Pictures Contemporary Art in Portland, Oregon. Her previous body of work, Stories from a Short Street, was exhibited earlier this year at the Missoula Art Museum. Andres was included in the 2006 Oregon Biennial at the Portland Art Museum and her films have been featured in numerous film festivals. She is a professor at Portland State University, and lives in Portland, Oregon.