The Prehistory of the Crisis

The exhibition brings together four artists and artist partnerships from different european countries at a time when art can have a discreet yet potent voice. Each of the works have been produced in relation to the power displacement experienced by both citizens and civil servants, the nebulous group of subjects variously called 'new nationals', 'migrants' or 'non-nationals', and migrants without the right to work, 'sans papiers'. 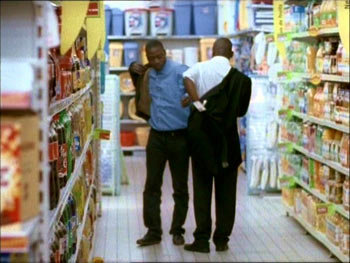 As Ireland heads into recession in 2008, cultural and socio-political relationships are beginning to tighten. The open and relatively inclusive web, of Irish and migrant workers, formed the bedrock beneath the economic boom. But as the stones begin to shift beneath our feet, where will discontent arise and how will Ireland cope with an upsurge of nationalism? Exhibitions throughout Europe have attempted to turn the lens of artistic perception towards places and centres of crisis, but all too often policy has already been set, and the possibility that art might have to influence cultural understanding has already been overtaken by dominant public opinion.

The Prehistory of the Crisis attempts to broach these issues before the period of crisis has hit, at a time when art can have a discreet yet potent voice.

An exhibition project in two parts, The Prehistory of the Crisis begins with an international exhibition at Project Arts Centre in October 2008. The exhibition brings together four artist and artist partnerships from the Netherlands, France, Germany and Serbia, who will all be exhibiting for the first time in Ireland. Each of the works have been produced in relation to the power displacement experienced by both citizens and civil servants, the nebulous group of subjects variously called ‘new nationals’, ‘migrants’ or ‘non-nationals’, and migrants without the right to work, ‘sans papiers’.

Aernout Mik’s video installation Training Ground, Patrick Bernier & Olive Martin’s film MANMUSWAK, Jeanne Faust & Jörn Zehe’s film sonst wer wie du (who else like you), and Andrijana Stojkovic’s film HOME all hone in on individual responses to conditions: the pieces are variously referential of particular situations, but they all activate within us some sort of responsibility for coming to a an autonomous awareness of the complexity of otherness and the complications of ‘living with others’.

The second part of the project, The Prehistory of the Crisis (II) is scheduled for July 2009 and will be an exhibition with artists who have turned their attention to the changing attitudes in the Irish context. The Prehistory of the Crisis (II) will be accompanied by lectures and debates which both challenge and further the research into the findings of the artists presented. Commissioned artists will be announced before the end of 2008.

Coinciding Events
Visual Artists Ireland’s 10th edition of Printed Project ‘The Art of Living with Strangers’ edited / curated by Lolita Jablonskiene is focussed on the subject of migration. The publication will be launched during European Council of Artists conference in Dublin (IMMA, 7 –8 November), which is being hosted by Visual Artists Ireland. Entitled ‘Artists Mobility / Aspiration or Reality’, this conference will consider issues of “artistic freedom in a globalised world, the European Arrest Warrant, borders, visa issues & cultural diversity, and the role of the European Parliament in the promotion of artists' mobility”. For further details see: http://www.visualartists.ie