Swansea's works are portraits of contemporary society in the broadest sense, beginning with the city and its all-encompassing commercialization, its squares defined by advertising billboards and used for large public parades, and ending with human encounters without relationships, where people confront one another like ghosts of themselves. 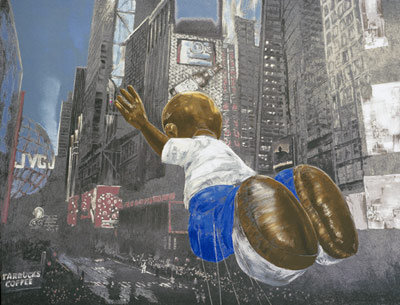 Arndt & Partner Zurich is delighted to present the first solo exhibition in Switzerland of US artist Ena Swansea.

Ena Swansea
born in 1965 in Charlotte, North Carolina. Lives and works in New York. Besides solo shows in galleries in New York and Berlin, her work has featured in important group exhibitions, such as Greater New York, P.S.1 Contemporary Art Center, New York, Goetz meets Falckenberg, Sammlung Falckenberg, Hamburg (both 2005), The Triumph of Painting III, Saatchi Gallery, London (2006), Back to the Figure. Contemporary Painting, Museum Franz Gertsch, Burgdorf (2006), and True Romance. Allegories of Love from the Renaissance to the Present, Kunsthalle Wien (2007/2008). Her solo show at the Musée d’Art Moderne (MuDAM) in Luxemburg opens in October 2008 (10/11/2008 – 02/02/2009).

“As if it had corroded through time...” is how the painter Luc Tuymans describes the work of his American colleague Ena Swansea, who creates this effect by grounding her canvasses with graphite before painting on them in oils. The paint appli¬cation is translucent and the brushstrokes remark¬ably wide; so wide that the question spontaneously occurs as to how such forthrightness can give rise to so realistic an impression. The answer probably lies in the graphic effect of the individual streaks of color in the brushstrokes and the way they cling to a form as if wanting to mould it. This corresponds to a stylistic technique used in etching or copper engraving, where the dark-gray opalescent prim¬ing shines through everywhere. Swansea’s swathes of paint – often in pastel tones of pink, yellow orgreen – flicker like will-o’-the-wisps across a base that is receding into the depths.

The images disintegrate into two color dimen¬sions: the hastily receding blackish gray and the bright colors that rush towards the viewer and give form to the motif. Between these two color values unfolds a void that borders on the uncanny. One is reminded of those films where entities are un¬seen but nevertheless exert their influence. Props are used to define them visually: items of clothing enfolding invisible bodies; articles held by invisible hands. In Swansea’s paintings, too, the uncanny dwells in the void, though not as a personified creepiness, but rather as a kind of abstract empti¬ness, a sense of disquiet. She swathes her figures in paint in order to allow them emerge into visibility.

Swansea’s works are portraits of contemporary so¬ciety in the broadest sense, beginning with the city and its all-encompassing commercialization, its squares defined by advertising billboards and used for large public parades, and ending with human encounters without relationships, where people confront one another like ghosts of themselves. Elements of reflection and reverberation appear in her work repeatedly. This sort of mirroring is also a reflection on the creation of images per se, as it refers to the basic foreignness between an object and its mirror image, which oppose each other like the sign and the object in classical semiotics. Who doesn’t know the sense of strangeness emanating from one’s own reflection, whose simple horizontal inversion means we can never see ourselves in the mirror as others see us?

Excerpts from a text by Holger Birkholz, Dull Mirrors – On Ena Swansea, in: Checkpoint # 6, the gallery review of Arndt & Partner, Berlin / Zürich