Exploring the immeasurability of the spher 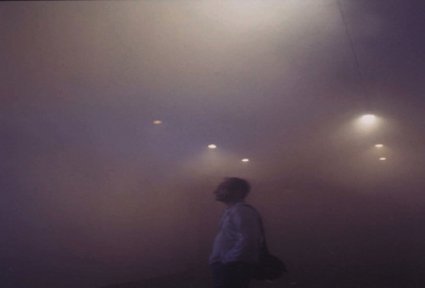 Initiated by the Siemens Arts Program in cooperation with the German Embassy in Kyiv, the Goethe Institute Ukraine and the Center for Contemporary Art Kyiv to mark the German Culture Week, the exhibition "Endless Sphere/Безкрайня сфера" is dedicated to exploring the immeasurability of the sphere from an artistic perspective - an endeavor which also touches upon aspects of philosophy. Featuring works from the leading avantgardist Frederick Kiesler, the Mexican Teresa Margolles, the Belgian David Claerbout and commissioned pieces by Cerith Wyn Evans, Alevtina Kakhidze and Alicja Kwade, the show's contributions all attest to the suitability of the term "sphere" for inspiring reflection on space and space-generating phenomena, both as an animated space (as a political, private, intimate sphere) and as an imaginary and virtual ball.

Sounding identical to "Endless Fear" when pronounced in the original English, the title of the exhibition "Endless Sphere" conveys something of its underlying concept. The sphere and the shiver, the space and the crisis, the self and the fear encounter each other in phonetic affinity.

In keeping with the derivation of its name, the country hosting the exhibition, the Ukraine, lies at the edge or periphery. The Greek word σφαίρα, or sphaira refers to a ball. Yet a ball or sphere is the only object without an edge. For spheres possess no clearly-defined borders or finiteness, they know no boundaries. Hence, it was not without reason that the German philosopher Peter Sloterdijk availed himself of spheres to construct his all-embracing explanatory model of human history. They are to be conceived as realms of influence which only then come into being when people occupy and act within a space. Consequently the term "sphere" is used to describe a kind of territory which surrounds us, a field of interaction, an enclosed space, which both in the physical sense and as a locus of human encounter remains undelineable, a concavity encompassing people and objects.

Beginning with works by the leading avantgardist Frederick Kiesler, who was born in the Ukraine before eventually settling in New York via Vienna and Paris, we see a reworking of the typical rounded liminal constructions of contemporary art. For Kiesler the sphere is the focal point of his notion of form; for the human senses reach beyond the tangible and visible world, forging sensual environments and rounded realities. Although the interior and exterior materialise, they remain indistinguishable - and in this spirit Kiesler constructs spaces such as semi-transparent caverns and diaphanous membranes. This is expressed most strikingly in his Endless Theater, which is on view here as a model reconstruction of the original design.

In his Sections of a Happy Moment, David Claerbout demonstrates how closely one can capture the precariousness of the sphere through the medium of film. The starting point for the experiment is a quotidian everyday scene: a Chinese family playing ball. Thrown up by a child, the ball or sphere, is in full flight, having probably reached its zenith; everyone is gazing up to observe its trajectory. This joyous moment in a banal game is captured by Claerbout from all conceivable perspectives.

The installation Parallelwelt 1 by the young Berlin-based artist Alicja Kwade comprises mirrors and lamps. Light shines from the semi-circular heads of black lamps; together the two lamps form a black sphere, in whose interior the light remains concealed. The reflected mirror image completes the sphere or ball, yet this completeness is hidden from the viewer, remaining invisible in the parallel world. The perfection of the endless is not accessible to us, yet resides merely in our imagination.

Cerith Wyn Evans shows a poetic arrangement of three mirrored lamps which emanate a soft glowing light as they alternately brighten and dim - redolent of a pulsating, sonorous universe. Cerith Wyn Evans comments on this representation of heavenly bodies with a passage taken from Johannes Kepler's book "Harmonia Mundi" from 1619, in which the harmony of space is closely linked with divine creation and human experience.

Alevtina Kakhidze, the Ukraine participant in the exhibition shows sketches of the surface of the Earth, as seen from the air. With her shifting perspectives, rough outlines, fleeting impressions she is alluding to the fact that art only becomes a highly desirable commodity in the Ukraine when all other consumer needs have been satisfied. To stage her project, she asked the owners of private planes to compile sketches from the air, drawing as it were an image of reality to which she has no access.

In her installation entitled Caída libre, created especially for "Endless Sphere/Безкрайня сфера", the Mexican artist Teresa Margolles explores the realm of autopsies, death and the washing of cadavers. A canister containing human fat has been mounted just below the ceiling of the exhibition room, and adjusted to allow one drop of fat a minute to fall onto the floor below, where it leaves a trace of human existence, a memory of an unknown presence, the ghost of a sphere.