The exhibition presents video works by 8 young artists: Johanna Billing, David Blandy, Yvonne Buccheim, William Hunt, Ben Kinsley, Kate Murphy, and the team Iain Forsyth and Jane Pollard. The title connects the project with the famous band, active since the late 1970's and early 1980's, a time when the artists featured in the show were coming of age. Curated by Mary Cremin. 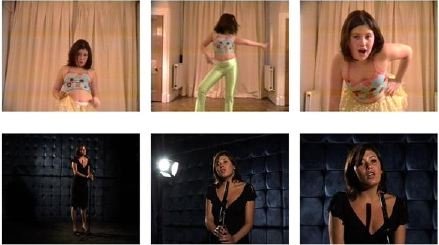 Sonic Youth presents video works by 8 young artists: Johanna Billing, David Blandy, Yvonne Buccheim, William Hunt, Ben Kinsley, Kate Murphy, and the team Iain Forsyth and Jane Pollard. The title connects the exhibition with Sonic Youth, the band, active since the late 1970's and early 1980' s­the time when the artists featured in the show were coming of age. The group mixes sound experimentation with electronic wizardry, offering music as soundscape rather than using melodies or predictable patterns in their compositions. Sonic Youth, the band, has always supported the idea of do it yourself, producing noise music that thoroughly disrupts predictable categories and musical genres as well as the traditional use of instruments and composition. Their rebellious attitude is echoed by the artists in the exhibition, since they do not organize their works according to video paradigms such as documentary or fiction, but propose instead a medley/network of open propositions.

In the exhibition, the artists experiment with the basic data offered by video: images, sound and movement, mediated through a camera used as an expressive tool. They cross over diverse categories, blurring fiction and documentation, reality and the reproduction of reality, to offer multiple choices to the viewer. They question the linearity of narrative, filmic components and conventional reading models. Some videos Britney Love, Herder's Legacy, Gesichtmusik‹offer a seamless stream that could repeat itself like as a broken record. At the basis of these works is music‹music as an actor, a main component rather than an accompaniment or an addition to an already constructed scenario. Music is the scenario. It defines the performance and the choices made by the artist. Sometimes the artist plays the role of an incidental witness, who happened upon something, as in Johanna Billing's video of a group of Croatian children rehearsing the song Magical World, which gives the video its title. The lyrics bring up questions of cultural identity and history. Sung in English, the song refers to a peaceful and magical world, from which one doesn't want to wake, while it also points to the difficulties experienced by Croatia as a young country with a troubled history. Magical World looks as if it were filmed inadvertently, as if these questions just transpired through the performance, itself the real subject. The seriousness and attention of the singers are shown through their faces and a few nervous motions. Changing features and body language convey poignant emotions. Such elements are also strong in Buccheim's video Herder¹s Legacy, where the singers channel mixed feelings through facial expressions, nervous ticks, shy gestures, and intense effort.

The artists in Sonic Youth employ a wide range of formal approaches, from crafting self-portraits (Ben Kinsley and William Hunt) to documenting collective and cultural identity issues (Kate Murphy, Davis Blandy, Yvonne Buccheim) to reflecting on concepts of truth and authorship (Iain Forsyth and Jane Pollard's). In The White and Black Minstrel Show, David Blandy performs in white face, inverting and thereby reconfiguring the black face of the historical minstrel shows (in which a white actor would masquerade as a black performer). These shows began in the 1830s with working class white men who parodied black musical and dances forms while dressed as plantation slaves and made up in black face. The song lip-synched by Blandy Is It Because I'm Black is a number by Syl Johnson from 1970. It refers directly to the social implication of color, while Blandy's masquerade using a character he calls the Black and White minstrel confuses definitions of identity and hence the defining parameters of race. Other videos recall aspects of Body art and Conceptual art. For example, in Even as You See Me Now, William Hunt tests the limits of his physical endurance by playing a song while a piano‹which he has painstakingly moved from its original place and wrestled with‹rests on his leg. Ben Kinsley's Gesichtmusik shows the artist making sounds with different parts of his face (mouth, cheeks, nose) in a way that enhances the do it yourself aspect of music performance. Both artists also bring to their work a lighthearted sense of humor and parody.

For File Under Sacred Music, Iain Forsyth and Jane Pollard re-filmed a video documenting a 1978 performance by the Cramps, a Los Angeles band, originally videotaped by a member of the audience during a concert they gave in a mental institution in Napa. The exacting copy of the original video includes a band, similar in style to the Cramps, gathered and hired by the two artists. In addition, they invited members of Core Arts and Mad Pride, two socially engaged organizations, to serve as audience to the performance. The movements, dancing, and exchanges between the crowd and the band were written down prior to the re-enactment and then followed carefully by the video crew members and the participants. File Under Sacred Music also recreates the blurs, scratches and other imperfections present in the 1978 VHS. The minute attention to details brought to the re-enactment, including the degradation of the tape, highlights the problem of reality vs. reproduction as it bears on the truth conveyed by documentary video. Moreover, the work questions notions of authorship and originality in the creative process.

The generation to which these artists belong is a determining factor in the way they consider and use video. Now an ordinary tool, experienced daily through TV, surveillance cameras, and home theaters, video has become a regular component of our lives. This familiarity helps demystify and debunk its position as an art form. The two parts of Kate Murphy's Britney Love, filmed respectively in 2000 and 2007, could well be home videos. She uses the documentary genre in the first video, filming a performance enacted by Brittaney, a tween fan of Britney Spear, in which the girl imitates the star she worships with enticing and strongly sexual stances and facial expressions. Murphy then picks up seven years later, showing Brittaney in the second video as a young woman of 18 who tries to assert her identity by repeating and toying with variations of her self-definition in front of the camera. Her identity is established through the video camera, a tool inseparable from the construction of her image and thus a key agent in her search.

Herder's Legacy, by Yvonne Buccheim, explores the way we align ourselves with history and nationality. The piece is part of The Song Archive Project, started by the artist in 2003‹a body of work that focuses on the cultural character of songs and singing, examined through a series of performances by diverse people recorded on video without preparation or rehearsal. Questions of originality and authenticity are also implied by the work, which is a contemporary audio-visual exercise inspired by a 18th-century song collection. The Song Archive Project responds to a 1773 anthology compiled by Johann G. Herder, attempting to show how cultural identity is asserted through song traditions. In the original work Herder, as a true heir of the Enlightenment, collected and classified folk songs according to rational categories, an early example of the paradigms developed in cultural anthropology. He was influenced by the scholar Leopold Ranke, an important historian and pioneer of a scientific approach to history.

In the video shown in the exhibition, Yvone Buccheim uses a four-panel window structure and a neutral background to frame the performance of each participant. The performers from 5 different countries represent various ages and social backgrounds. However, the blank background and the seamless recording through which the songs slide from one performer to another without distinct breaks of boundaries reflect the difficulty of recognizing a specific origin or a specific cultural identity. What instead appears is the personality of each participant, revealed through their spontaneous acts and visible emotions. Distanced from the original scientific and objective experience, the result emphasizes, on the contrary, a subjectivity that multiplies the facets of cultural and national identity and doesn¹t systemize them. Mediated through an ever-growing and omnipresent electronic visual culture, newsreels and information networks, our histories and identities are at a juncture where the margins are becoming blurred, remapped and redesigned. The works in the exhibition recognize and articulate these effects.