"El Lamento de los Muros" gives a voice to women who were kidnapped under the Argentine military dictatorship, and held in one of the government's secret prisons, of which there were more than 550 in existence during the years 1976 to 1983. Paula Luttringer was herself incarcerated in one of these prisons for five months in 1977. Her exhibition combines photographs of these secret places of violence and torture with texts. 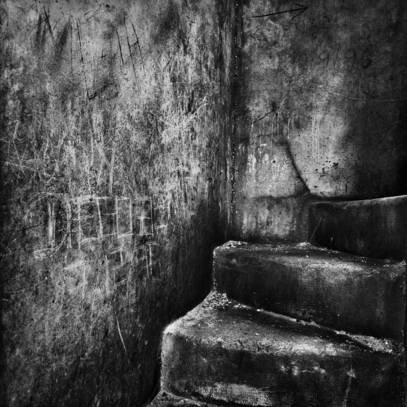 The Wailing of the Walls gives a voice to women who were kidnapped under the Argentine military dictatorship, and held in one of the government's secret prisons, of which there were more than 550 in existence during the years 1976 to 1983. Paula Luttringer was herself incarcerated in one of these prisons for five months in 1977. Her exhibition combines photographs of these secret places of violence and torture with voices of the 'disappeared' women of the time who were prepared to share their recollections with the photographer.
Paula Luttringer's work is not only an impressive retrospect illustrating one of the darkest chapters in Latin American history – it is also a powerful wake-up call, urging us that these victims of compulsory deportation and their message should never be forgotten.

Interview: I went down about twenty or thirty steps and I heard big iron doors being shut. I imagined that the place was underground, that it was big, because you could hear people’s voices echoing and the airplanes taxiing overhead or nearby. The noise drove you mad. One of the men said to me: so you’re a psychologist? Well bitch, like all the psychologists, here you’re really going to find out what’s good. And he began to punch me in the stomach.
Marta Candeloro was abducted on June, 17, 1977 in Neuquen. She was then taken to the Secret Detention Center "La Cueva."

"Some men arrive. They force their way into a family’s home, rich or poor, house, hovel or hut, in a city or in a village, anywhere. They come at any time of the day or night, usually in plain clothes, sometimes in uniform, always carrying weapons. Giving no reasons, without saying who they are or on whose authority they are acting, they drag off one or more members of the family towards a car, using violence in the process if necessary."
"Disappeared!: Technique of Terror", Report for the Independent Commission on International Humanitarian Issues

People disappeared like this. Neither they themselves nor anybody else knew, where they were, they were just gone — as if swallowed up by the earth. Sometimes the missing person reappeared after weeks, months, or even years in secret custody. Sometimes those who "disappeared" were never seen alive again. For those who survived, there is an empty space — a gap in their life. Marks of absence are not erased by the passing of time and never stop to affect the emotional life, also of their children and families.

Everywhere in the world, there are survivors of torture and mistreatment, who live their lives with profound scars — as partners, parents, grandparents, colleagues, neighbours… — being hurled back toward this past just by a noise, or smell in any moment.

"The Wailing of the Walls" focuses on women who were kidnapped and detained in one of the over 550 Secret Detention Centres in Argentina which existed during the military dictatorship from 1976 to 1983. Paula Luttringer herself spent five months in one of them in 1977. The exhibit places photographs of those Secret Centres in conversation with voices of former disappeared-women-captives, who agreed to share their memories with Paula Luttringer over the years 2000–2005. These women’s stories and photographs hope to bring the reality of torture and forced disappearances of women in Latin America into the light .

In Argentina the military and police who were the instruments of repression were given amnesty. Therefore, often in small provincial towns the formerly interned women were exposed to those very men who tortured them. This has forced them into silence they have only recently managed to break. On June 14, 2005, the Argentine Supreme Court struck down the amnesty laws that protected the military for decades. Federal prosecutors are now preparing hundreds of cases against retired military officials. Today, thirty years after the "Dirty War", its victims are once again faced with death threats.

"On September 18, 2006 in La Plata, the city where I was born, just before the trial of one of the most important perpetrators, one of the witnesses was kidnapped on the way to the court. In the same week hundreds of survivors have received death threats, including — as of now — more than half the women I interviewed. Someone wants to keep us quiet."
Paula Luttringer, 2007

This makes Paula Luttringers work not only an impressive retrospect on one of the darkest chapters of Latin American history, but also an arousing and demanding call not to forget these victims of forced disappearances and what they have to tell us.

This work has been travelling through Argentina and internationally.