Works from the Corcoran Gallery of Art. The show contains over 100 works produced by American artists since the end of the 19th century. From landscape painters and the artists working under the influence of Paris, to Abstract Expressionism and even photography - which has an important position in the Corcoran Gallery's collections - the exhibition shows how modern art has developed in the United States up to the present day. The artists represented include George Bellows, John Singer Sargent, Arthur Davies, Marsden Hartley, Joseph Cornell, Thomas Hart Benton, John Sloan, Edward Hopper, Milton Avery, Mark Rothko, Willem de Kooning, Cy Twombly, Richard Diebenkorn, Martin Puryear and Robert Mangold. 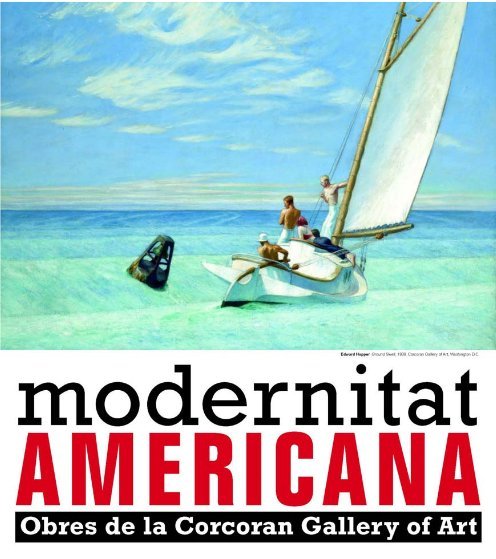 The Joan Miró Foundation is presenting “American Modernism”, an exhibition sponsored by BBVA and selected by Sarah Newman, Sarah Cash and Philip Brookman, curators at the Corcoran Gallery in Washington, D.C., and by Martina Millà, programmes and projects coordinator at the Foundation.

The show is an invitation to explore the complex emergence of modern art in the United States through more than 100 works by American artists from the late nineteenth century to the end of the twentieth century.

The Corcoran Gallery of Art is one of the major institutions focusing on historical and contemporary US art, and is one of the three oldest galleries in the United States. Established with the aim of “encouraging American genius”, its extensive collection from the eighteenth, nineteenth and twentieth centuries encompasses many of the country’s greatest artists.

The Gallery was founded in 1869 by the collector and financier William Wilson Corcoran and was officially opened in 1874 to present, interpret and preserve the art of present times and the past. Education is therefore a central focus, both in its exhibition galleries but also in the classrooms of the Corcoran College of Art.

In this respect, the Corcoran Gallery was a pioneering project in America. Located close to the White House, it was the first private art museum in the federal capital and the first one devoted to American artists. Thanks to its exceptional history and its commitment to contemporary art, the Corcoran Gallery today has a collection that offers a broad view of all the periods, styles and genres of American art from the eighteenth century onwards.

The exhibition includes major works from the Corcoran’s collection, beginning with the nineteenth-century precursors of Modernism, that help us to understand the development of modern art in the United States and more generally up to the end of the twentieth century.

The exhibition is structured in sections along chronological lines:

A distinguishing feature of the Corcoran Gallery’s collection is the importance attached to photography. The fact that the Gallery was established at about the same time as the birth of photography meant that special attention was paid to this art form from the outset. Its collection of photographs, which in many cases show scenes from everyday life, are also of immense documentary value and reflect the state of the country over the course of the twentieth century. This section, devoted to some of the greatest American photographers, acts as a counterpoint and explains the close conceptual and formal relationship between photographic experimentation and modern art in the United States. It has been specially selected by Philip Brookman, Chief Curator and Head of Research at the Corcoran Gallery.

“American Modern” raises the principal questions that helped determine and promote the development of modern art in the United States. It was a far from simple process, and one that aroused considerable controversy, but it led to artistic results that left a profound mark on the history of art in the twentieth century and raised US art to a privileged international position.