Owens is well known for his Studio Visit series, in which he engages visiting artists or arts professionals in one-on-one acts relating to the visitor's work. He commonly uses the body as a conduit for conversation, exposing the underlying dynamics between two individuals through prescribed physical interactions. Owens plays with the history of conceptual text-based work in Text Piece, which presents a grid of 47 photographs of white text against black. 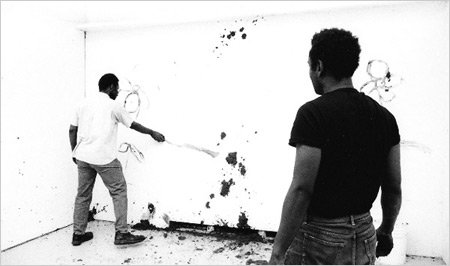 On November 2, On Stellar Rays will open an exhibition of photo-based work by Clifford Owens, marking the first solo exhibition for both the gallery and the artist.

Owens is well known for his Studio Visit series, in which he engages visiting artists or arts professionals in one-on-one acts relating to the visitor's work. Studio Visits originated during a Skowhegan residency in Maine, where William Pope.L was one of the artists to visit Owens' studio. Owens commonly uses the body as a conduit for conversation, exposing the underlying dynamics between two individuals through prescribed physical interactions. The studio visit with Pope.L began with Owens' empty, white studio, buckets of mud, and pails of water. Owens and Pope.L proceeded to cover the walls with mud, each mud-slinging and smearing in turn. The performance was documented on a roll of black and white film, from which all 36 photographs will be on view, unedited and in sequence. As with all of Owens' work, the installation goes beyond documentation and takes on a strong formal component. The first image captures the white studio, and as more mud covers the wa lls, and sequentially gradates to darker shades.

Owens plays with the history of conceptual text-based work in Text Piece, which presents a grid of 47 photographs of white text against black. Though the stark formalism might initially suggest more distanced work (Owens often-present body is conspicuously absent), closer inspection reveals 47 intimate and personal phrases. The viewer is confronted with "She likes to finger my feelings," "Mother Baltimore," and "I thought you were gay." Here, the conversation is more literal, though it is unclear whether the words are directed at us, the artist, or whether the conversation is happening within the piece.

In Owens' most recent body of color photographs, the artist explores the uniquely African-Ecuadorian community of the Esmeralda Province, Ecuador. There continues to be a thoughtful exploration of self in the work (Owens' young son is half Ecuadorian). This is visible though the eyes of the young men Owens encountered in the Esmeraldas, who are looking intensely at Owens in each work. Prelingual, an intimate family portrait taken before his son's birth, will also be on view.

Owens is perhaps best known for his provocative performances, in which the audience is frequently required to engage with Owens, and shifts of power and perspective are at play. Owens will offer two performances in conjunction with this exhibition. On November 2, there will be a performance in the downstairs gallery of On Stellar Rays. In addition, Owens is offering a custom-designed performance for an individual or institution. Owens will visit the commissioner in advance, script and produce a unique performance for the commissioner and guests, to be performed in his or her private space. The work will be documented and made available to the commissioner in a video and photographs. This work pushes Owens' exploration of the interaction between artist and audience, and the positions of control and perspective in any engagement with art. Please contact the gallery for more information.

Clifford Owens art has appeared in numerous group exhibitions including Performa05, New York, NY; Freestyle and Quid Pro Quo at The Studio Museum in Harlem, New York, NY; Greater New York 2005 P.S.1, Queens, New York; Influence, Anxiety, Gratitude, List Visual Art Center, Cambridge, MA. Owens studied at The School of the Art Institute of Chicago, Mason Gross School of Visual Art Rutgers University, and the Whitney Museum Independent Study Program. He was an artist in residence at The Studio Museum in Harlem in 2005-06 and Skowhegan School of Painting and Sculpture in 2004. Grants and fellowships include Art Matters, Louis Comfort Tiffany Award, New York Foundation for the Arts Fellowship, Lambent Foundation, and the Rutgers University Ralph Bunche Graduate Fellowship. He was born in Baltimore, Maryland in 1971, and he lives and works in Queens, New York.