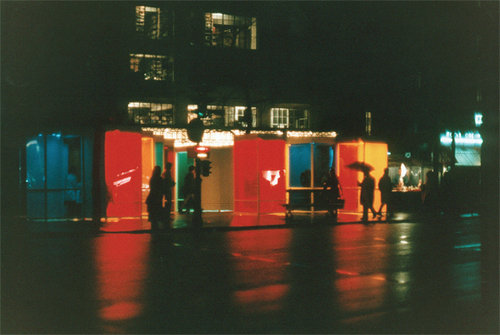 This fall Americas Society presents Carlos Cruz-Diez’s first solo show in a major U.S. cultural institution. Focusing on the relationship between color and perception, the exhibition will increase the visibility and appreciation of Carlos Cruz-Diez in the United States, one of Latin America’s Kinetic Art masters.

Carlos Cruz-Diez: (In)formed by Color will feature Cromosaturación, a site-specific environment designed by the artist for Americas Society’s gallery. Initially conceived of in 1965, this groundbreaking artwork consists of three separate light-infused color chambers of red, green, and blue. The true content of the work involves the visitor walking into, through, and around the shifting chromatic space, and its interaction over time with his or her own physical movement. The exhibition will also present 20 of Cruz-Diez’ early Fisicromías, a series of changeable chromatic structures produced from 1959 onward. These will offer insight into the thinking process behind the artist’s exploration of the liberating, participatory experience of color as a physical presence.

Through his work, Cruz-Diez wishes to engage the viewer in a direct chromatic experience outside traditional cultural conventions, empowering the spectator in the active creation of the piece’s meaning. In contrast to well known artists such as Mark Rothko, Barnett Newmann, and James Turrell, who offered color as a contemplative experience, Cruz-Diez demands the viewer’s participation. Cruz-Diez is considered a pioneer in the use of color as a participatory tool as well as a visionary who pushed the boundaries of art towards everyday life.

A major publication will accompany the exhibition; it will include essays by Nuit Banai, Mariela Brazón, Estrellita Brodsky, Gabriela Rangel, Isabela Villanueva, and an interview with the artist by Alexander Alberro. The catalogue will be available in November 2008.

Americas Society’s Visual Arts department is committed to the development and presentation of programming that explores the diverse artistic traditions of Latin America, Canada, and the Caribbean. As part of an overall institutional effort to redefine and revitalize our historical mission, the Visual Arts department has embarked upon a programmatic re-consideration to present, disseminate and study the works of outstanding artists from throughout the Americas. Recognized for its leadership role in presenting innovative exhibitions and works by artists such as Marta Minujin (1968), Gego (1969), Juan Downey (1975), César Paternosto (1981), Lygia Pape (2001), Allora and Calzadilla’s (2003), Paula Trope (2007), Americas Society is the gateway to bring the outstanding works by Carlos Cruz-Diez to New York.