Work/Place looks at the idiosyncratic personal routines that individuals perform inside their offices. The photographs and video in this exhibition use as their raw material the highly ordered but often banal and absurd activities of office life. In his photographs, Michael Wolf examined the endless ranks of residential housing complexes in Hong Kong by removing the horizon line and flattening the space to a relentless abstraction of urban expansion. 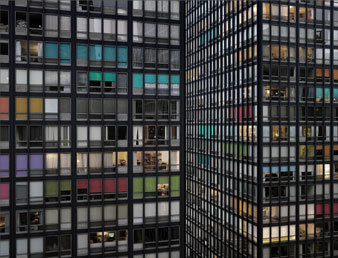 Many people spend countless hours in an office amid the buzz of fluorescent lights, the din of a constantly rustling ventilation system, the glow of a computer screen, and that silent impatience of stacked files and loose papers. Mundane as it seems, the workplace is fertile territory for artists to explore. In conjunction with the exhibition Michael Wolf: The Transparent City, which offers a furtive depiction of contemporary urban life from the outside, Work / Place looks at the idiosyncratic personal routines that individuals perform inside their offices. The photographs and video in this exhibition use as their raw material the highly ordered but often banal and absurd activities of office life.

Thomas Demand (German, b. 1964) re-creates media-based photographs by painstakingly making and photographing full-scale, three-dimensional models of their subjects. (The models are constructed entirely from colored paper, and a detail of an entire office copy center is included in this exhibition.) Although Demand’s subject may seem boring and commonplace, his work often carries cultural or political relevance and offers a smart critique of mass media. In much of his work the relevance of the paper itself is the subject of the picture. For example, his picture titled Office (Büro), 1995 depicts a ransacked office made of paper. The picture refers to an image, reproduced in Der Spiegel, of the Stasi Central office in Berlin after it was pillaged by East Berliners seeking their personal records. Although the scattered papers in Demand’s version are blank, the reference to a paper-choked, Kafkaesque society is clear. The office copy machine is also laden with cultural myths concerning fraud and breaks in confidentiality. Close inspection of Demand’s pictures reveals their artifice and encourages us to question the photograph as a faithful reproduction of reality, especially in a world that is saturated with manipulated imagery.

Using wit to emphasize the banal, Lars Tunbjörk (Swedish, b. 1956) observes the vernacular interiors of anonymous businesses in Europe, Japan, and the United States. He portrays what he sees as the melancholy and absurdity of modern-day office life and the struggle of the individual against corporate homogeneity. Like the artificiality of Demand’s re-created offices, Tunbjörk’s series underscores the often sterile and artificial nature of work environments. He observes individuals tailoring their environments to their needs—a shoeless man stretching his legs under his desk, another man talking on the telephone tucked under his desk. Tunbjörk also uses body language and formal constructs to capture the hierarchal levels of office politics—a woman crouches under a desk organizing papers while her assumed boss stands above by the window, for example. In many of his pictures there is a sense that something is festering under the surface or behind closed doors.

Decorating one’s office or cubical with snapshots of loved ones and pets is another way workers venture to fight the uniformity and impersonality of the workplace, often revealing more of their personal lives than intended. Karen Yama’s (American) photographs of such arrangements are odd still lifes that expose our desire to modify our work spaces to feel more like home. In these photographic constructions, Yama flattens elements of the pictorial space with uniform color while retaining the detail and grain of each family snapshot. This peculiar juxtaposition illustrates the tension between revealing personal information and maintaining a professional etiquette in the office.

In Sloss, Kerr, Rosenberg & Moore (2007), a video mixing elaborate formality with humor, the artist team of Ann Carlson and Mary Ellen Strom (American, b. 1954, 1957) collaborated with four practicing New York City attorneys. By means of a rigid vocal score and whimsical choreography, filmed in the attorneys’ elegant office building, the performance provides metaphors for the theatrical aspects of litigation and the high-pressure demands of working within the juridical system. Seeing the lawyers chant and contort their bodies in exaggerated ways ultimately exposes their humanity.

In each of the works on view, the artist strikes a balance between the personal attributes brought into an office and the homogeneity of office etiquette and behavior. As the popular television show The Office so cleverly depicts, the great challenge of the workplace is the implausibility of drastically distinctive personalities having to function toward the same goals—under the same roof.

In 2005 Michael Wolf (German, b. 1956) visited Chicago for the first time to participate in a group exhibition for the Museum of Contemporary Photography. As he rode an elevated train from the airport into the city, he began to envision photographing Chicago. For the previous decade, Wolf had been living and working in Hong Kong, attempting to capture the sheer density of people living on the two small islands that make up that city. Wolf examined the endless ranks of residential housing complexes in Hong Kong by removing the horizon line and flattening the space to a relentless abstraction of urban expansion. He noticed, however, that Chicago had an entirely different feel. While Hong Kong is built of endless rows of structures designed and built in a nearly identical style, Chicago has more experimental, unique buildings of many different styles.

In 2007, the Museum of Contemporary Photography, in collaboration with the U.S. Equities Reality artist-in-residence program, invited Wolf to create his first body of work to address an American city. Chicago is known for work by innovative architects such as David Adler, Daniel Burnham, Louis H. Sullivan, and Frank Lloyd Wright, and after World War II, it established itself as a world capital of modern architecture influenced by the international style of Mies van der Rohe and home to notable projects by Helmut Jahn, Philip Johnson, and more recently Frank Gehry. While it has been common for photographers to glorify Chicago’s distinctive architecture and environmental context, Wolf depicts the city more abstractly, focusing less on individual well-known structures and more on the contradictions and conflicts between architectural styles when visually flattened together in a photograph. His pictures look through the multiple layers of glass to reveal the social constructs of living and working in an urban environment, focusing specifically on voyeurism and the contemporary urban landscape in flux. Wolf explores the complex, sometimes blurred distinctions between private and public life in a city made transparent by his intense observation.