The group exhibition as a whole may appear deadpan, satirical or pathetic - in any case each of the constituent works turns its back on complacency, and, in doing so, becomes material evidence of resistance (kicking from within the sack); curated by Blair Taylor and Ellen Langan. Contemporary Mark Flood: "Entertainment Weakly", a solo exhibition that inaugurates the new gallery in Culver City, it includes drawings, paintings and installation from the past and present. 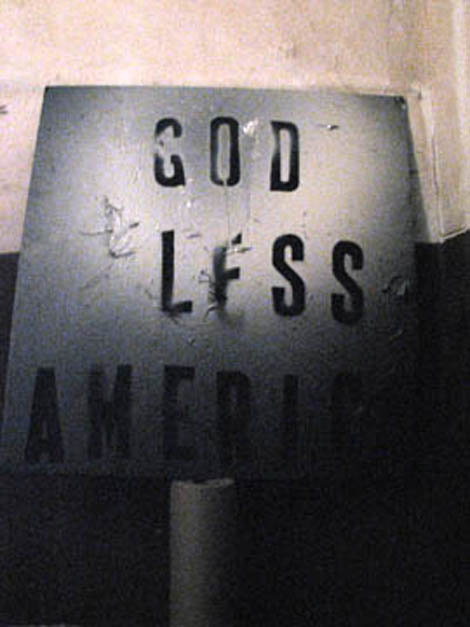 Toted around, thrown in the corner, recovered as relic or disposed of as useless, a sack of bones is unavoidably deformed. It is an apparently dead object subject to the intentions of its creator, or its purveyor, or its consumer, or maybe just its times.

The group exhibition "Sack of Bones" comes from a viewing of Paul Rachman's 2006 film, American Hardcore, in which Mark Flood appears as an interviewee on the topic of 1980's punk rock. The tone of the film is reverent, to be sure, but more than an ode, the voices in the film present conflicting parts pride, humor, fraternity, anger, bitterness, nostalgia, and what are often doleful mechanisms for dealing with the here-and-now. That Flood was both part of Hardcore as it existed musically (in 1980 his band, Culturcide, put out their first 7-inch: "Another Miracle/Consider Museums as Concentration Camps") and has been practicing visual art for over 30 years poses an interesting question: how, if at all, can art be hardcore? By embodying adolescent punk obsession? By miraculous use of irony? By a simple withdrawal from popular territory?

Consider, for example, the tangled 'attitude problem' precipitated by Reagan-era punk; there is the myth of a pure strain of FUCK YOU, there is the myth of the majority's snide perception of its counter-movements, and then, somewhere in the overlap, there is the problematic dilution of any rebellion's once-potent beginnings (causing cycles of backlash and resurgence pretty much ever after). In the art world this tangle is further convoluted by the relishing of trade and an inherent affluence, elitism and circuitous pandering that can compromise anyone's well-intentioned we/they stirrings.

The exhibition as a whole may appear deadpan, satirical or pathetic – in any case each of the constituent works turns its back on complacency, and, in doing so, becomes material evidence of resistance (kicking from within the sack). In other words, with all that is stacked against the mutinous artist and the mutinous viewer, hope could lie in objecthood itself.

Inaugurating the Peres Projects gallery in Culver City, Los Angeles, the exhibition will include mixed media drawings, paintings, sculpture and installation from the past and present.

Flood is a Merry Deformer, romping through the art world's carefully arrayed aisles with a stencil and a can of spray paint, rearranging its face. Matters of identification are fertile ground upon which to sew mischief, and yet Flood never abandons the potential of a beautiful phenomenon in favor of just being stabby. The surface of a text panel or lace painting still holds all the subtle irregularities and shiny moments prone to seduction.

The works exhibited here cover three decades of Flood's output, from the defaced advertisement drawings of the early 1980s to brand new assemblages fashioned from the local Texas debris of Hurricane Ike. Bathed in a acid-lime light, the group together presents, in Flood's words, "topics for non-discussion: our relationship with pictures of celebrities, the effects of vibrant community on layers of dust, market correction fluid, accidental suicides, casual sex with photographs, healthy stalking, shared recipies for aesthetic disasters."

For further information or reproductions please contact Sarah Walzer at tel. + 1 213 617 1100 or sarah@peresprojects.com.