A collaboration between New York-based artists Lucas Ajemian and Julien Bismuth that investigates the creative potential of detours through language, action and image. Taking the experience of distraction as their starting point, the artists discursively explore the experience of being diverted from one's train of thought. 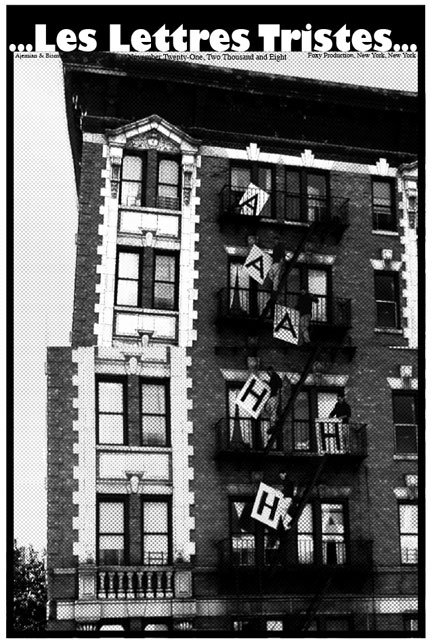 Foxy Production presents Les Lettres Tristes, a collaboration between New York-based artists Lucas Ajemian and Julien Bismuth that investigates the creative potential of detours through language, action and image. Taking the experience of distraction as their starting point, the artists discursively explore the experience of being diverted from one’s train of thought.

Les Lettres Tristes (The Sad Letters) refers to the Lettristes, the members of the avant-garde group, established in mid-century Paris, who used letters, hieroglyphics and other graphic symbols to create wildly experimental films, poetry, and art-works. Like a snapshot of Lettrisme itself, the exhibition combines key features of a number of Modernist movements, including Abstractionism, Dada, and Situationism, to generate a constellation of inter-related writing, video and objects.

Les Lettres Tristes' many elements are distilled within a weekly journal incorporating the words and images of a number of invited artists and writers. Surrounding these growing stacks of papers, the exhibition comprises a directional sound piece of recorded excerpts from the newspapers, a double screen performance video, minimalist sculptures, a series of text and image-based wall pieces, an alphabetical animation, and a table covered with diagrams and plans.

Central to the exhibition is a yet to be made collaborative film. Still in the conceptual stage, it ties all the elements in the gallery together. The artists have written:

The anchor of this project, its horizon line as well, is a film. For the past two years, we have been working on a feature-length film, titled Les Tristes. The idea originated from a photo shoot, from its discards, images we had of the participants walking from one location to the other holding up large white signs, each of them decorated with a single letter. The film would consist of movements of individuals and groups, all of them holding letters, the letters of the French alphabet in a city, a city which could almost be any city, but which in this case will be New York City.

It is from the planned film that the deflections and digressions are made that eventually form the works in the show.

The Les Lettres Tristes newspaper, a broadsheet the artists have described as “a script to a play in a theater of distraction”, is delivered weekly to the gallery. Each edition features work by a number of artists and writers, and includes poetry, anagrammatical writing, alphabetic artworks, cartoons, games and articles gleaned from other publications.

From these newspapers the artists have recorded excerpts that are played in the gallery using a very narrow beam sound system. This audio can take people moving through the space by surprise; they may feel they are overhearing strange private conversations.

Set Pieces is a double-screen video that plays with the central ingredients of dramatic performance: actor, script, and prop are skewed in their relation to one another without undermining the viewer’s suspension of disbelief. Ajemian and Bismuth are the main players in a number of vignettes whose central props are flat chroma-key green shapes that resemble oversized, unfinished origami forms.

These props have been replicated in metal and sit like odd minimalist sculptures within the main gallery space. Also titled Set Pieces, they underline the lateral and at times humorous inter-referencing of the exhibition’s constituent parts.

A Hole in Copenhagen is a series of wall-based works combining images cut from newspapers with annotated excerpts from a play in the process of being written. The works obliquely and wittily capture the collaboration process in its conceptual phase.

In the backspace of the gallery, a video animation links letters to words and gestures, recalling the absurdist nature of Sesame Street alphabet games. Also in the space is a table with notes, models and plans upon it, acting as a repository for the artists' ideas that were surplus to the final exhibition.

Lucas Ajemian (1975) holds an MFA from University of Illinois at Chicago. He has had solo exhibitions at Daniel Hug Gallery, Los Angeles; Galerie Parisa Kind, Frankfurt; Kirkhoff, Copenhagen; Moderna Museet, Stockholm (all 2008); and the Palais de Tokyo, Paris (2007). He has recently participated in the U-turn Quadriennial 2008 in Copenhagen. His work has been reviewed in Artforum, The New York Times, and Flash Art.

Julien Bismuth (1972) holds an MA from Goldsmith’s College, London and is a PhD candidate in literature at Princeton University. He has had solo exhibitions at The Box, Los Angeles; Layr: Wuestenhagen Contemporary, Vienna; Institut d’Art Contemporain, Lyon, France (all 2008); Galerie Parisa Kind, Frankfurt (2007); and Galerie Georges-Philippe & Nathalie Vallois, Paris (2006). His work has been reviewed in the New Yorker, The New York Times, and Flash Art.

Lucas Ajemian and Julien Bismuth have collaborated on a series of projects since 2005. They have exhibited together at the Galerie Georges-Philippe & Nathalie Vallois, Paris (2008); and Galerie Parisa Kind, Frankfurt (2006). They recently participated in the group exhibition Signals: A Video Showcase at the Orange County Museum, Newport Beach, CA (2008).