Marginal moments. Her films revolve around our experience of reality and the aesthetic tension between the private and the public. The artist is preoccupied with the authentic situation but alternates between documenting and staging such situations. 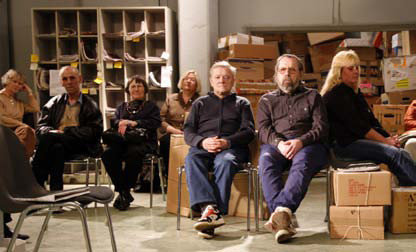 Johanna Domke’s artistic practice derives from close observation of urban structures and the psychology of public space. Her films revolve around our experience of reality and the aesthetic tension between the private and the public. Domke is preoccupied with the authentic situation but alternates between documenting and staging such situations. The subsequent technical processing of the material reduces these situations to isolated phenomena that move between the border of documentary and non-narrative fiction.

Johanna Domke’s film Cuers is inspired by Franz Kafka’s The Trial and the filmic universe of Orson Welles. The audience is taken on a fleeting and meandering journey through different sites in public space, where people are exposed to long waiting. The individual is presented as a singular being, confronting structures of public space. The particular situations are represented in an inspirational manner shifting in and out of each other. Time and space dissolves in kaleidoscopic pictures, emphasising how we both physically and mentally have trouble adjusting to our anonymous environment. Cuers seeks to create a mental space through abstraction and subversion of the familiar.

Domke’s newest film Stultifera Garden also deals with an overlapping structure of the public and the private. The film is set in a park – a cultivated form of nature. In baroque times the park functions as a symbol of power by the oligarchy, demonstrating their influence by forcing nature into a human ideal. The traditional garden is a place where the entire world is represented in highly symbolic symmetry and perfection. Today it is a place were city dwellers recover from busy urban life. At the same time it is a place implementing the “elsewhere” - an un-ruled territory for individuals who are in conflict with society or the human milieu in which they live. It is also a place for individuals whose behavior is deviant with the respect to the mean or the required norm.

As in earlier works, Domke uses a traveling camera to approach the parks diverse character, emphasising polarities as observing and being watched, high and low culture, control and non-control. The incessant pan evolves from a classic portal towards a dystopic, mazy structure of trails. The camera experiences different milieus of the park not directly examining them but portraying them with an inexplicit openness. She accesses milieus that formed architectonical structures in the shrubs, such as cruising areas and drug trafficking points. She discovers places that became functionalised entities - for teens as a get-away, for elderly as a meeting point - each and everyone with their own character and history. Without stating explicit action or narrative Stultifera Garden is more interested to explain that a park is a place for the other, where all these milieus and facets function along side. Intruding as an omniscient eye, Domke is constructing the real to establish the fictitious.