WorkSpace. Ornaments in the Landscape, and the Museum as Hotel Room 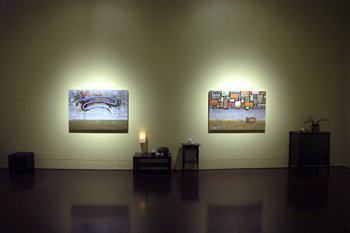 The Blanton Museum of Art is pleased to present, Ornaments in the Landscape, and the Museum as Hotel Room, a new installation by Argentine artist Marcelo Pombo for its current WorkSpace. The Blanton WorkSpace series explores new developments in contemporary art by featuring commissioned projects by emerging and mid-career artists from around the world.

Marcelo Pombo is one of the key figures to emerge from the 1990s art scene in Argentina. For the current WorkSpace, he presents six new paintings (2007–2008) that depict imaginary worlds. Around them he recreates a hotel lobby by introducing decorative ornaments and furniture into the museum's gallery. Pombo's skillful painting technique and his use of intense and saturated color result in works that posses sculptural and candy-like qualities, with projecting volumes and a sense of movement embedded in his abstract compositions. He uses acrylic paint to create visual collages that combine formal styles introduced by well-known visual artists—such as Cy Twombly or Fred Tomaselli—and ordinary decorative objects. His paintings allude to concepts of beauty and good taste, shedding light on the idea that both lie on the eye of the beholder. Pombo's recreation of an environment that resembles a hotel lobby breaks away from the seriousness of the common practices of white-wall museum displays. This exhibition makes a gentle but satirical comment on the kitsch ornaments and decoration of public spaces such as hotels and also on the increasing use of installations in contemporary art.

Above all Ornaments in the Landscape, and the Museum as a Hotel Room invites the viewer to think about beauty. Defined in the dictionary as "the quality or aggregate of qualities in a person or thing that gives pleasure to the senses or pleasurably exalts the mind or spirit," beauty will always be defined by individual taste that is determined by personal context and the background of the viewer.

Born in Buenos Aires, Argentina in 1959, Marcelo Pombo was part of the movement known as "Arte Light" in the 1990s, which was formed by a group of artists associated with the Centro Cultural Rojas. His work during this decade alternates between painting and object making, utilizing ornamental materials associated with decoration. In recent years, he has shifted towards large-scale painting, applying industrial paint and sparking polishers to depict fantasy worlds that combine graphic design, comic culture, geometric abstraction, as well as surrealist influences. His work has been featured at Ruth Benzacar Gallery (Buenos Aires, Argentina), Christopher Grimes Gallery (Santa Monica), and Blaffer Gallery (Houston), among others. In 2007 the monographic book Pombo, was published in Buenos Aires

The exhibition is curated by Ursula Davila-Villa, interim curator for Latin American art at the Blanton.

WorkSpace: Marcelo Pombo: Ornaments in the Landscape, and the Museum as Hotel Room is generously supported by members of the Blanton Contemporary Salon.

This exhibition is the first comprehensive presentation of a crucial, yet little-known, episode in the history of American and Latin American Conceptual art. Showcasing over 100 prints, drawings and mixed media works, the exhibition will explore contributions made to the Conceptualist movement of the 60’s and 70’s through the printmaking of the The New York Graphic Workshop (NYGW). The NYGW was founded in 1964 by three young Latin American artists in New York– Luis Camnitzer, Josè Guillermo Castillo, and Liliana Porter –whose mission was to redefine the practice of printmaking in conceptual terms, focusing on the mechanical and repetitive nature of printmaking, rather than its traditional techniques. The exhibition will examine the group’s philosophies and processes through examples by NYGW founders Camintzer, Castillo and Porter, along with other artists. Works produced by the group on behalf of some of the leading contemporary artists of the period, including Michael Snow, Max Neuhaus, Josè Luis Cuevas, and Salvador Dalì­ will also be exhibited.

The Park Place Gallery was a prominent artist’s cooperative space in 1960s New York, shared by five sculptors (Mark di Suvero, Peter Forakis, Robert Grosvenor, Anthony Magar, and Forrest Myers) and five painters (Dean Fleming, Tamara Melcher, David Novros, Edwin Ruda, and Leo Valledor). With their unique interest in dynamic, complex space in sculpture and painting and their active engagement with contemporary cultural issues, the group was often at odds with the predominant movements and philosophies of most artists of the day. As a result, Park Place has rarely been treated in histories of the 1960s. By assembling a selection of major works rarely seen or seen together since that era—as well as photographs and documents chronicling the group’s activities—this exhibition opens a new window on the 1960s art world. In doing so, it reveals the decade to have been a period of much richer artistic possibility and complexity than standard art historical narratives ever suggest. The exhibition runs September 28, 2008–January 18, 2009.

The Blanton Museum of Art is located at the intersection of Brazos and Martin Luther King Jr. Blvd.
The University of Texas at Austin MLK at Congress Austin, Texas 78701