In her images the artist deconstructs the interactive structure of the cult of celebrity by means of black humour fabricating a relationship between star and his/her believer, the fan. Mellor's painting style is simultaneously fed by surrealism, the colourfulness of Pop Art and the intentional bad taste of a Joe Coleman. In the exhibition she presents the 120 part portrait cycle Vile Affections (2007-2008) as well as numerous new large-scale works, drawings and a wall painting. 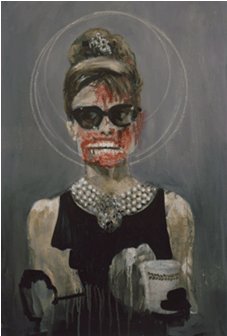 In her images Dawn Mellor (born 1970 in Manchester, lives and works in London) deconstructs the interactive structure of the cult of celebrity – which appears in our culture to have been elected as a substitute for religion – by means of black humour fabricating a relationship between star and his/her believer, the fan. In so doing the artist herself frequently takes the role of an obsessed follower. Through a frequently self-chosen “painterly” role Mellor destroys the moral codes communicated through mass entertainment vouching for a deliberated immorality. Whereby in the face of the obsessive image worlds the question is also continually asked about the actual standardised taste of the observer and its verification. Mellor’s painting style is simultaneously fed by surrealism, the colourfulness of Pop Art and the intentional bad taste of a Joe Coleman. In her first institutional presentation in Switzerland the painter is to exhibit amongst other works, the 120 part portrait cycle Vile Affections (2007–2008) as well as numerous new large-scale works, drawings and a wall painting.

The delusional fan or stalker as they are also called, that can no longer leave the object of his/her desire alone, is a figure that has already taken a firm place in Mellor’s works. The starting point for her paintings is formed throughout by celebrities and stars, idols and icons of the most various fields and eras. They frequently undergo a grotesque deconstruction, the narrative of which she contextualises anew and furnishes with a new symbolism and iconography. The artist herself takes on various stalker roles and makes distinct to which of various functions the star can be assigned: as family member, lover, enemy or object of delinquent sexuality. The painting and drawing that emerges from this fictive role giving is a performative painting concept which also produces an intellectual distance between subject and object.

In Mellor’s portrait series Vile Affections, begun in 2007, not only music stars surface such as Britney Spears and Michael Jackson or divas of film such as Elizabeth Taylor and Audrey Hepburn and personalities from the world of politics like Barack Obama, Tony Blair and Margaret Thatcher, but also intellectual stars like Julia Kristeva or lifestyle icon Anna Wintour. The celebrities that Mellor takes on are largely media stars of significant cultural importance. They fulfil roles, represent clichés and types, or stand for points of view or perspectives on the world, fashion and style. It is quite clear hereby that, as an English person, Mellor allies herself to the history of portrait painting, which has developed a great tradition in England throughout the modern period. Furthermore this reference is underlined by the historically appearing salon hanging of over 120 portraits, which embeds each painting crammed close to the next in a whole complex and creates a contradictory appearance of totality oscillating between amusement, adoration and disgust. Whether plucked out eyes, lacerations, severed limbs or persistent sexual penetration – Mellor’s «Hall of Fame» tips repeatedly into a «Hell of the Beautiful». Ultimately Mellor touches upon the concept of the grotesque body, which particularly in the Middle Ages and the Renaissance period was a central cipher of popular humour: a body, in which the degenerated and the newly sired life is joined in an inward process distinguishing itself through its state of unfinishedness. Vile Affections inevitably recalls medieval performances which through obscene gestures and jokes as well as through critical parodying imitations enabled the public to mock at personages of various classes and differing origins in public. The grotesque body can also be described as the folk body, which bears a thoroughly utopian potential within it.

In the large format Dorothy cycle begun in 2006 – the protagonist in this series being the figure of Dorothy Gale played by Judy Garland in the film The Wizard of Oz (1939) – Mellor sustains her investigation of mass media, pop cultural iconography and mythology as well as the effect of stereo typical societal models. In so doing she makes use of the multi-codifications of the figure: the film character of Dorothy as a nice middle class allegory of the «white» rite of passage later merged with the real Judy Garland – who hit the headlines for her drug excesses – and became an icon for the homosexual movement. Mellor multiplies these divergent presentations: in her pictures she lets the figure continue to grow, incorporating on the one hand the complex reception history and on the other the film iconography and creates new narratives. Hereby in Mellor’s horror image world Dorothy oscillates in parable manner between victim and perpetrator, between exploiter and the exploited – whether it is as a «Trümmerfrau» (the women who rebuilt Germany out of the ruins of World War II), pushing yellow bricks along in a hand cart through dreary streets, or as a leader of a legion of golden death-head hybrids.

On the occasion of the exhibition JRP|Ringier is publishing the first monograph on the artist. It features a foreword by Raphael Gygax and a lengthy discussion with Dawn Mellor.

The migros museum für gegenwartskunst is an institution of the Migros-Kulturprozent. http://www.kulturprozent.ch

The artist and the curator are available for press conferences from 24th to 28th November.
For such arrangements and visual material as well as other information please contact Raphael Gygax: presse@migrosmuseum.ch

The exhibition will be opended on Wednesday, November 26th 2008, from 6 pm on.