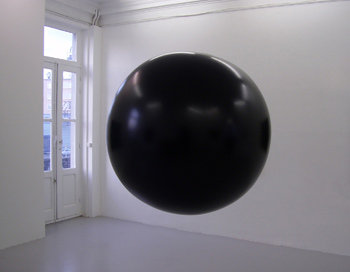 "Neither missiles nor rockets nor sputniks will render man the "conquistador" of space. Those means derive only from the phantom of today's scientists who still live in the romantic and sentimental spirit of the 19th century. Man (...) will be able to conquer space--truly his greatest desire--only after having realized the impregnation of space by his own sensibility."
Yves Klein, The Chelsea Hotel Manifesto, New York, 1961

- Cast a meter of ribbon into the air and capture its trajectory and its movement in mid-flight (Tom Marioni)
- Float an object in space (Edith Dekyndt)
- Compare the ratio of weight and volume of a given body and experience the effect of its density (Didier Vermeiren)
- Walk vertically up a wall (Trisha Brown)
- Let oneself tumble and analyze the fall (Yoko Ono)
(...)

These are just a few propositions, or experimental methods, that make it possible to test gravity, to extricate oneself from it, or to render weightlessness tangible…

The laws of attraction and gravity invisibly govern the movement of the world and the elements: the incessant ebb and flow of the tides, the revolution of the planets. The universe is thus defined by its equilibrium of opposing forces. These imperceptible phenomena determine and delimit our way of being in the world, our dislocations, and irrevocably bind us to the earth.

From the fantasies of flying or floating (as revealed by the sublimity and pathos of Gino de Dominicis' attempt to transform himself into a man-bird, or by Yves Klein's angelic leap suspended in mid-air), to the philosophies of religious or metaphysical transcendence, humanity has aspired to elevation and desired to be free from alienation of and subjugation to gravity… Including the contemporary demand for lightness, from "lite" food to our relations to others, passing through the domain of thought…

This physical and existential dialectic, which is in a permanent state of oscillation between height and willful falling, drives us to explore the limits of balance and these opposing forces.

Vertigo, floating, rocking, inversion of perception, power, and tension are some key words to help guide the viewer through the exhibition which makes light of gravity in order either to subvert it or to make us experience it, in the lightness of dust as well as in the imposing physical presence of a ton of weight "suspended" in the air.

The Fonds régional d'art contemporain de Lorraine, a member of "Platform", network enjoys financial backing from the Lorraine Regional Council and the Lorraine Region Cultural Affairs Department (DRAC) at the Ministry of Culture and Communication.