Through the Gate. Rhode's practice, which incorporates performance, photography, film, drawing and sculpture, draws upon his upbringing in South Africa. For this exhibition, he tackles the historical relationship between Britain and his native country. His photographic works, presented in a sequential storyboard format, record scenarios in which the artist, or his alter ego, interact with two-dimensional objects loosely drawn with chalk, charcoal or spray paint on a concrete wall or pavement. 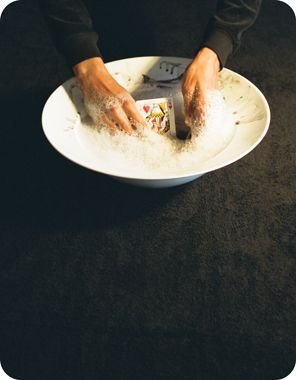 White Cube Hoxton Square is pleased to present 'Through the Gate', featuring the work of Robin Rhode in his first exhibition at the gallery. Rhode's practice, which incorporates performance, photography, film, drawing and sculpture, draws upon his upbringing in South Africa. For this exhibition, he tackles the historical relationship between Britain and his native country.

Britain's imperial past provides the basis for a number of works in 'Through the Gate'. 'Impis' comprises a series of British police riot helmets rendered in coloured glass, which are placed in a 'bull's horn' formation in the centre of the gallery. The Zulu army used this method of encircling the enemy as a tactic against the British army in the Anglo-Zulu war of 1879, when the Zulu nation won independence from colonial rule. In his sculptural installation, Rhode inverts this, implying that the British have appropriated the strategy that led to their defeat. Likewise, in works such as 'Ghost Dog', Rhode alludes to pre-colonial artefacts acquired by the British. A companion piece to 'Impis', this sculpture features a two-headed dog inspired by Kozo, a carved wooden figure found in the Congo in the late nineteenth century and now housed at the British Museum, London. Rhode's version shows a German Shepherd, a breed he chose for its associations with police brutality in South Africa during apartheid rule as well as referencing those used by Belgian colonisers to control the native population in the Congo. Rhode attempts to exorcise his childhood fear of these animals in 'Ghost Dog'. Dozens of knives pierce the dog's two-headed body, with one head snapping at the other in an absurd, circular motion. This circular, or reflexive, motion is a motif that Rhode employs throughout the exhibition.

Rhode's photographic works, presented in a sequential storyboard format, record scenarios in which the artist, or his alter ego, interact with two-dimensional objects loosely drawn with chalk, charcoal or spray paint on a concrete wall or pavement. Underlying these humorous improvisations is a commentary on the politics of poverty, race, national representation and individualism. In 'Monument to the Chairman', two protagonists attempt to construct a memorial. The identity of the 'Chairman' remains unknown, yet as the structure takes shape, echoes of the British Secret Intelligence Service (MI6) building in London begin to form. 'Sun Up' relates to symbols sketched by gang members during Rhode's schooldays. This sequence of four photographs depicts a hand-held flick knife, its blade unfolded and seemingly used as an implement to draw the circumference of a blood-red sun on the grid-lined paper behind it.

A number of other works, such as 'Pan's Opticon', cite the practice of the Russian constructivist El Lissitzky. The title plays on the Panopticon, the design for a prison building by British philosopher and social theorist Jeremy Bentham, which allowed constant surveillance of prisoners without their knowledge, providing, in Bentham's phrase, a 'mode of obtaining power of mind over mind'. Here Rhode's doppelganger uses an architect's compass as a tool of mass observation.

Robin Rhode was born in Cape Town, South Africa in 1976. He lives and works in Berlin, Germany. Solo exhibitions include 'Who Saw Who' at the Hayward Gallery (2008) and 'Walk Off', Haus der Kunst, Munich (2007), and in 2009, he will have solo exhibitions at Los Angeles County Museum of Art and Wexner Center for the Arts, Ohio. Group exhibitions include 'Prospect', New Orleans Biennial (2008), 'Stray Alchemists', Ullens Center for Contemporary Art, Beijing (2008), 'Out of Time', Museum of Modern Art, New York (2007) and 'When Latitudes Became Form', Walker Art Center, Minneapolis (2003).

A fully illustrated catalogue, with essays by Edith Hall and Ossian Ward will be published to coincide with this exhibition.

White Cube
48 Hoxton Square - London
Open Tuesday to Saturday, 10am to 6pm. White Cube will be closed from 2pm on Wednesday 24 December 2008 and will reopen to the public on Tuesday 6 January 2009.
Free admission