The exhibition explores the history and works of Fluxus through the Gilbert and Lila Silverman Collection. The origins of this international network of artists have been traced to the teachings of John Cage, the serial compositions of Karl Heinz Stockhausen, and the organisational talents of George Maciunas. On show over 350 works from 1961 - 1978 by 50 international artists such as Robert Filliou, Alice Hutchins, Gieseppe Chiari, Per Kirkeby, Shigeko Kubota, Claes Oldenburg, Daniel Spoerri, Ben Vautier, Wolf Vostell, La Monte Young... 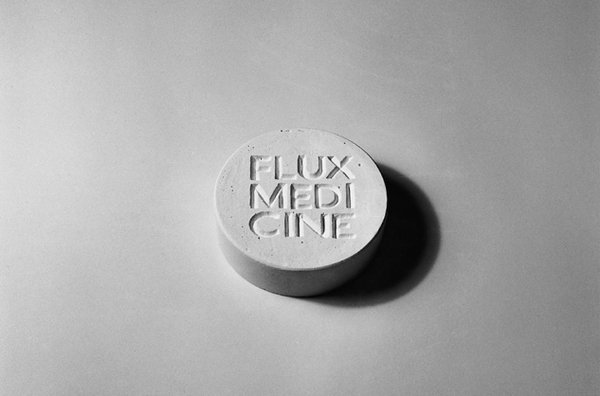 BALTIC Centre for Contemporary Art explores the history and works of Fluxus through the renowned Gilbert and Lila Silverman Fluxus Collection, Detroit. This unprecedented exhibition of over three-hundred and fifty works from 1961 – 1978 is the largest display of Fluxus ever mounted in Britain.

Fluxus is often historically regarded as a global network of influential and vibrant artists who shared a unique, if not united, aspiration to revolutionise the avant- garde. Through the introduction of concept art, intermedia, and radical performance practices, Fluxus pioneered an aesthetic appreciation for the everyday. By intentionally confusing the boundaries of how and when an artwork could begin or end, exiting a room, making a salad, or ending a war were transformed into performative works of art.

Reflecting its international network of artists, Fluxus began in many places from as many creative perspectives. The origins of this network have been traced to the teachings of John Cage, the serial compositions of German composer Karl Heinz Stockhausen, and the organisational talents of graphic designer, architect, and artist George Maciunas. Maciunas was the self-appointed chairman of Fluxus. His political and agitprop approach to Fluxus aspired to a complete overhaul of the complacent bourgeois art world. Maciunas dreamed of a Fluxus whose collective spirit enabled the availability of Fluxkits, Fluxfeasts, Fluxfests, and Fluxfilms for the price of a paperback. Having coined the phrase Fluxus in 1961, Maciunas organised a series of groundbreaking European performance festivals beginning in 1962 that set the tone for countless Fluxus events that continue throughout the world in theatres, galleries, and on the street.

Centring on Maciunas’s contributions to Fluxus until his death in 1978, The Dream of Fluxus is curated by Thomas Kellein of Kunsthalle Bielefeld, Germany in collaboration with Jon Hendricks, curator of the Gilbert and Lila Silverman Collection.

This collection of works, many of which were acquired directly from the George Maciunas estate in 1984, began with Gilbert Silverman’s interest in the work of Fluxus artist Geoffrey Hendricks in the early 1970s. Silverman adds: “You have to understand that real collectors are on a major ego trip and that the idea of collecting something is to have something more than someone else, that if I worked very hard and really fast I could put together the biggest Fluxus collection in the world.”

Details of a symposium organised by BALTIC discussing how collections guide our understanding of art history and particularly Fluxus will be announced shortly.
BALTIC will be organising a series of Fluxus events and Fluxfilms to coincide with the exhibition.

BALTIC would like to thank Thomas Kellein from Kunsthalle Bielefeld, Germany and Jon Hendricks, Fluxus Curator for their contribution and support in creating the exhibition at BALTIC.

BALTIC is a major international centre for contemporary art situated on the south bank of the River Tyne in Gateshead, England. BALTIC presents a constantly changing, distinctive and ambitious programme of exhibitions and events, and is a world leader in the presentation, commissioning and communication of contemporary visual art. BALTIC has welcomed over 3 million visitors since opening to the public in July 2002.