The exhibition presents seven international artists who work with photography, film, video and performance. Anne Collier, Maria Eichhorn, Mark Leckey, Hilary Lloyd, Henrik Olesen, Seth Price and Hito Steyerl explore the appropriation and circulation of images in contemporary society, examining the role of money, desire and power in our accelerated image economy - from the art market to the internet and art historical icons to pornography. Curated by Polly Staple. 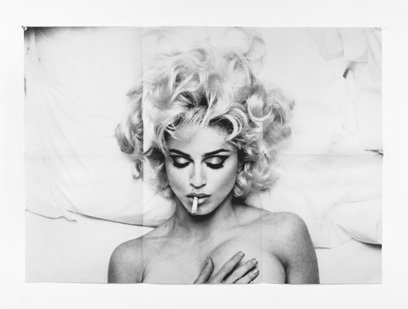 Dispersion presents seven international artists who work with photography, film, video and performance. All of these artists explore the appropriation and circulation of images in contemporary society, examining the role of money, desire and power in our accelerated image economy – from the art market to the internet and art historical icons to pornography.

The works in Dispersion often take the form of archives, histories or collections, sometimes adopting an anthropological approach. In many cases, they are characterised by an interest in feminism and gender politics in the realm of sexuality and sub-culture. All the works however are informed by personal or idiosyncratic narratives, exploring the role of subjectivity in the contemporary flow of imagery and capital.

The title Dispersion is drawn from an essay written by participating artist Seth Price, which reflects on the role of 'distributed media' in avant-garde practice, from Duchamp to Conceptual Art. The exhibition has been curated for the ICA by Polly Staple, the recently appointed director of the Chisenhale, London and includes six gallery-based presentations as well as a special performance in the ICA Theatre.

Henrik Olesen engages in a critical investigation of the archive, proposing a reinterpretation that moves beyond conventional representation and historical fact. His work consists of massive wooden panels carrying an encyclopedic collage of homosexual imagery culled from postcards and books. Hito Steyerl, whose work immerses the viewer in a labyrinth of image associations and meanings, is presenting a documentary-style video Lovely Andrea (2007) which focuses on the artist's search for an image of herself performing as a bondage model in Tokyo in the 1980s.

The work of Seth Price also manipulates highly charged material, demonstrating the collision of value systems caused by a surfeit of images. Digital Video Effect: "Editions" (2006) is a kaleidoscopic remix of Price's previous editioned videos – which themselves juxtapose the films of other artists with advertising, newsreels and computer animation. Anne Collier's work also employs appropriation, but draws specifically on the tradition of appropriation art and 're-photography'. Collier's photographs depict iconic film posters, album covers and magazine pages, together forming a subjective lexicon of popular imagery.

Hilary Lloyd's Studio (2007) is a two-screen video installation that obsessively records paint marks on the floor of her studio, voyeuristically following the traces of a painter that previously occupied the space. A similar tension between private experience and public display is encountered in Maria Eichhorn's Film Lexicon of Sexual Practices (1999-2008), an archive of 16mm films depicting a range of sexual practices, from which visitors are invited to request works to be screened for them in the gallery.

Popular culture, commodity fetishism and the economies of exchange all find echoes in the work of Turner Prize shortlisted Mark Leckey, whose live performance Mark Leckey in the Long Tail (2009) is being staged for one night in January. This work takes the form of a lecture by the artist that roams across television history, and which reflects on the 'long tail' theory of internet-based economics.

Performance
Mark Leckey's performance of Mark Leckey in the Long Tail is being staged in the ICA Theatre on 31 January. Tickets are available from the ICA Box Office (+44 20 7390 3647).

Publication
Dispersion is accompanied by an exhibition publication in the form of a 'reader', reproducing a lead essay by the exhibition's curator, Polly Staple, and a variety of existing and new texts on the participating artists and the wider themes of the exhibition.

The exhibition is sponsored by the Danish Arts Council Committee for International Visual Art.

The Institute of Contemporary Arts is a registered charity in England, No: 263848