Serving nothing. The artist explores the medium of photography, creating fragile installations that extend into theatre-like mises-en-scene. Photography is often no longer recognizable as the initial point of departure. Burger's work is a wistful investigation of production and consumption in the system of art. 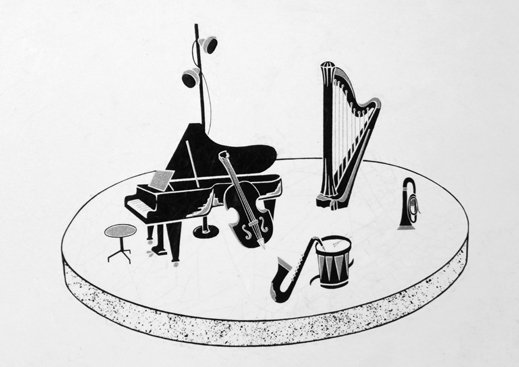 Stefan Burger explores the medium of photography, creating fragile installations that extend into theatre-like mises-en-scène. Photography is often no longer recognizable as the initial point of departure. Burger’s work is a wistful investigation of production and consumption in the system of art. Toying with a kind of detachment or ambivalence in the artists’ role as ‘producer’, there is a sense of the experimental in Stefan Burger’s work that carries a consideration of existential themes - such as the fear of collapse - with wit and incisiveness.

In the exhibition ‘Serving Nothing’ Stefan Burger will present a combination of photographic and sculptural works that act as prompts or illusive starting points. ‘The Innocent Eye Test’ is a photograph of an ambiguous measuring device, which having had a role in previous works, is now re-presented. Here it seems as curious an object as that which is appears in the work, ‘Welti-Furrer,’ – an image of a man unfazed at the appearance of a large kebab shaped art-object.

The sculpture, ‘A Constructivist Support to a Hobby Punctum’, stands in the centre of the space – a board onto which is pasted a disarming image of a group of children, propped up at an angle like a picture frame on a household mantelpiece. Here Burger offers up an improvised solution to Barthes’ description of the ‘punctum’ - “that accident [of photographic detail] which pricks, but also bruises; is poignant.” Burger creates an aggrandized three-dimensional ‘punctum’ propped up by a criss-crossing of painted wood. Referencing constructivist photomontage and geometric abstraction, this ‘hobby’ punctum appears as a stand-in for an enigmatic photographic concept.

An allusion to the failure of a work to support itself, to keep its composition intact, is an ongoing characteristic of Burger’s work. In the downstairs gallery, the video ‘Collaps’ appears for the most part to be a still image or documentation of a two dimensional assemblage of coloured geometric forms. This composition abruptly falls apart revealing but a collection of elements held up by strings; a formalist puppet-show.