The Amie and Tony James Gallery 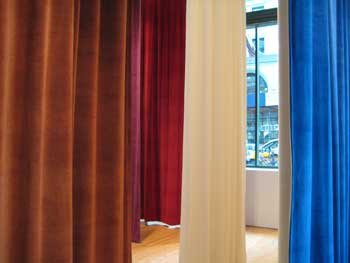 The Amie and Tony James Gallery at the Graduate Center of the City University of New York is getting a decidedly modern facelift under the direction of its recently appointed curator, Linda Norden. Accentuating the gallery's prime location on Fifth Avenue between 34th and 35th Streets, on the first floor of the former B. Altman Department Store building, Norden plans to turn the James Gallery into an active art forum and to use its exceptional location to provoke curiosity among pedestrian passersby, as well as art world insiders and the Graduate Center’s students and faculty.

While the building’s conspicuous department store windows were retained when the Graduate Center relocated, Norden is working with a team of architects to take full advantage of the gallery’s transparency to the street. As part of the overhaul, a wall on the 35th Street corner will be removed for greater visibility, and a modular system of interchangeable panels will allow the windows to be translucent or closed to varying degrees, depending on the needs of the exhibition. The new system incorporates a series of "peepholes" even when the windows are otherwise closed off. The gallery will also use display cases in the Graduate Center lobby, remnants of the building’s department store history, as another way to interact with the public.

"I hope the gallery will become a meaningful destination: a flashpoint between the city, the art world, and the Graduate Center," Norden says.

The gallery has a distinguished history of presenting museum-quality exhibitions. The current architectural alterations are the physical manifestation of initiatives for the gallery, stemming from an endowment provided by Amie and Tony James. These include the hiring of Norden as director, along with an assistant curator, as well as the creation of an advisory board of directors. Under its new leadership, the gallery will generate an ambitious experimental, mostly contemporary, exhibition program. Its mission is to use this programming to catalyze and focus dialogue between the contemporary New York art worlds and the scholarly community of the Graduate Center.

The first show scheduled in the gallery this fall, “People Weekly” (to open October 2), will put various aspects of the initiatives into practice. It will feature a succession of six projects chosen or created in response to the gallery's location, architecture, and institutional context. During the two weeks surrounding the upcoming presidential election, the gallery will be furnished by L.A.-based artist Linda Pollack with an installation titled “Habeas Lounge,” an arena for election-inspired discussion. In December, artist Daniel Joseph Martinez will show a monumental new sculptural installation addressed to the role played by housing design in Israel’s West Bank Settlements. New projects by Yunhee Min, Tomas Torres Cordova, and anthropologist film makers Illisa Barbash and Lucien Taylor will run in October, November, and January as “Weekly” stretches to “Monthly.” Also in October, an exhibition within the exhibition will allude to the intertwined histories of department store and museum display. This exhibition essay will feature reconfigured projects by Rachel Mason and William Pope L., a sampling of works from Sol LeWitt’s mostly bartered art collection, and artwork for Art Spiegelman's new book, Breakdown, which will be released during the run of the show. To further reclaim the former department store for art and mind, two of Barbara Kruger’s controversial 1997 allegorical sculptures on the themes of “Justice” and “Faith” will be installed in the building’s lobby display windows.

In the future, Norden plans to program the gallery each year with three to four historical as well as contemporary shows, often with outside curators. “My aim is to curate an unpredictable mix of concentrated exhibitions that reflect the varied interests of the Graduate Center, and repay repeated viewings despite their small scale,” she says. Over time, the gallery might be used for out-takes—projects often considered too risky by mainstream museums—from larger museum exhibitions; as a pilot space for artists and curators developing ambitious long-term projects; or for exhibitions inspired by the research of Graduate Center faculty and Ph.D. candidates. In the gallery's spirit of open dialogue with the public, each exhibition will be amplified by extensive related programming. And, through the establishment of internships, students in the Ph.D. Program in Art History will be able to participate in the curatorial process.

The Graduate Center is the doctorate-granting institution of The City University of New York (CUNY). An internationally recognized center for advanced studies and a national model for public doctoral education, the school offers more than thirty doctoral programs as well as a number of master’s programs. Many of its faculty members are among the world’s leading scholars in their respective fields, and its alumni hold major positions in industry and government, as well as in academia. The Graduate Center is also home to more than thirty interdisciplinary research centers and institutes focused on areas of compelling social, civic, cultural, and scientific concerns. Located in a landmark Fifth Avenue building, the Graduate Center has become a vital part of New York City’s intellectual and cultural life with its extensive array of public lectures, exhibitions, concerts, and theatrical events.

January 17 – January 31, 2009
Thomas Torres Cordova, Everybody Loves the Sunshine, 2007; I wish you could color correct my films for the rest of my life, 2007
(Reception and performance by the artist, January 21, 6-8pm)
Thomas Torres Cordova reconstructs a two-part essay on air conditioning – a film on the history of this ubiquitous electrically-fueled cooling device, and an installation demonstrating the benefits of those magnificent machines and the over-heated hallucinatory visions that an air conditioned culture leaves in its wake.